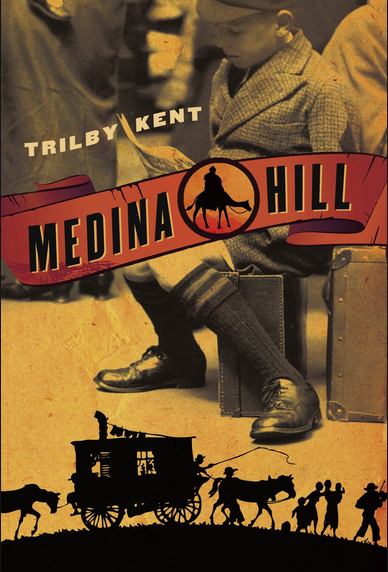 Many moons ago, when I got invited to participate in the Medina Hill Book Blog Tour, I convinced Kayla that she totally should read it along with me so we could chat about it.

This is how our conversations went every couple weeks in the 2 months leading up to today’s post.

In any event, I finally read Medina Hill and we discussed.

Here is the official blurb from the publisher:

In the grimy London of 1935, eleven-year-old Dominic Walker has lost his voice. His mother is sick and his father’s unemployed. Rescue comes in the form of his Uncle Roo, who arrives to take him and his young sister, Marlo, to Cornwall. There, in a boarding house populated by eccentric residents, Marlo, who keeps a death grip on her copy of The New Art of Cooking, and Dominic, armed with Incredible Adventures for Boys: Colonel Lawrence and the Revolt in the Desert, find a way of life unlike any they have known. Dominic’s passion for Lawrence of Arabia is tested when he finds himself embroiled in a village uprising against a band of travelers who face expulsion. In defending the vulnerable, Dominic learns what it truly means to have a voice.
Kayla: Ok, so, how much did you love all the stuff about Lawrence of Arabia? All I knew about him was that Peter O’Toole played him in a film in the 60s but I had NO CLUE he was a real person. I loved the stuff about him sprinkled throughout the book. I kind of want to go check out a book about him now.
Janssen: I know! I love a book that references other books or major historical characters as a main plot point. Mockingbird, which I read a few weeks ago, heavily relied on “To Kill a Mockingbird,” “Girlfriend Material” referenced “The Sun Also Rises” and I love Lawrence of Arabia stuff since taking a World War I class from my father-in-law back in London. It was just so fun to watch Dominic get inspired by Lawrence and act like he thought Lawrence would. Isn’t that what history should do? (Oh, is that my history nerd self talking?) I think that was the book’s major success.

Janssen: But frankly, that was pretty much the only success for me.

Kayla: Also agreed. All of Medina Hill just fell kind of didn’t it? And it was really slow for a children’s book.

Janssen: Exactly. It was made worse, perhaps, by the potential this plot had. I mean, you couldn’t ask for more than this book offered up (except maybe romance, but I’ll let my personal preferences slide because this is a children’s book) – crazy characters, a father suffering the effects of war, gypsies, a treasure hunt, a COOKING CONTEST, but I never felt like it really all came together. It was just too much; a classic case of too much width, not enough depth. It spread itself too thin, without making me care much about any of the characters, and it resolved itself too quickly.

Kayla: Exactly, the climax felt really unsatisfying and I would have loved to hear more about the quirky boarders. There was a whole lot more story there that just didn’t get told. I do think I would like to know what happened to the gypsies. I was very concerned when they moved CLOSER to Hitler at the end of the book. A follow-up book on the Romany during WWII would probably be worth reading. The thing is, I think Trilby Kent has a lot of potential. The ideas were there. I think she just needs to give herself more pages to really delve into her characters and possibly write for a slightly older audience (like shooting for older YA rather than middle grades).

Overall, we felt some kids will find a lot to like here, but it’s going to need to be a very dedicated reader who is willing to accept the slowish pace. It’s really the kind of book we could see a kid reading and then going off hunting for some books about Lawrence of Arabia. And we wouldn’t blame him one bit since that’s totally what we’re planning on doing.

Previous Post: « What I’m Going to Read: Round 5
Next Post: These Is My Words: The Diary of Sarah Agnes Prine by Nancy E. Turner »