Ella’s been a sixth grader for more than half the year and I still can’t really wrap my mind around it! She’s getting so old!

She’s been reading up a storm lately and it was so fun to hear her tell me all about her favorite books.

If you’re looking for some good chapter books for 6th graders, I hope you’ll find this list helpful! 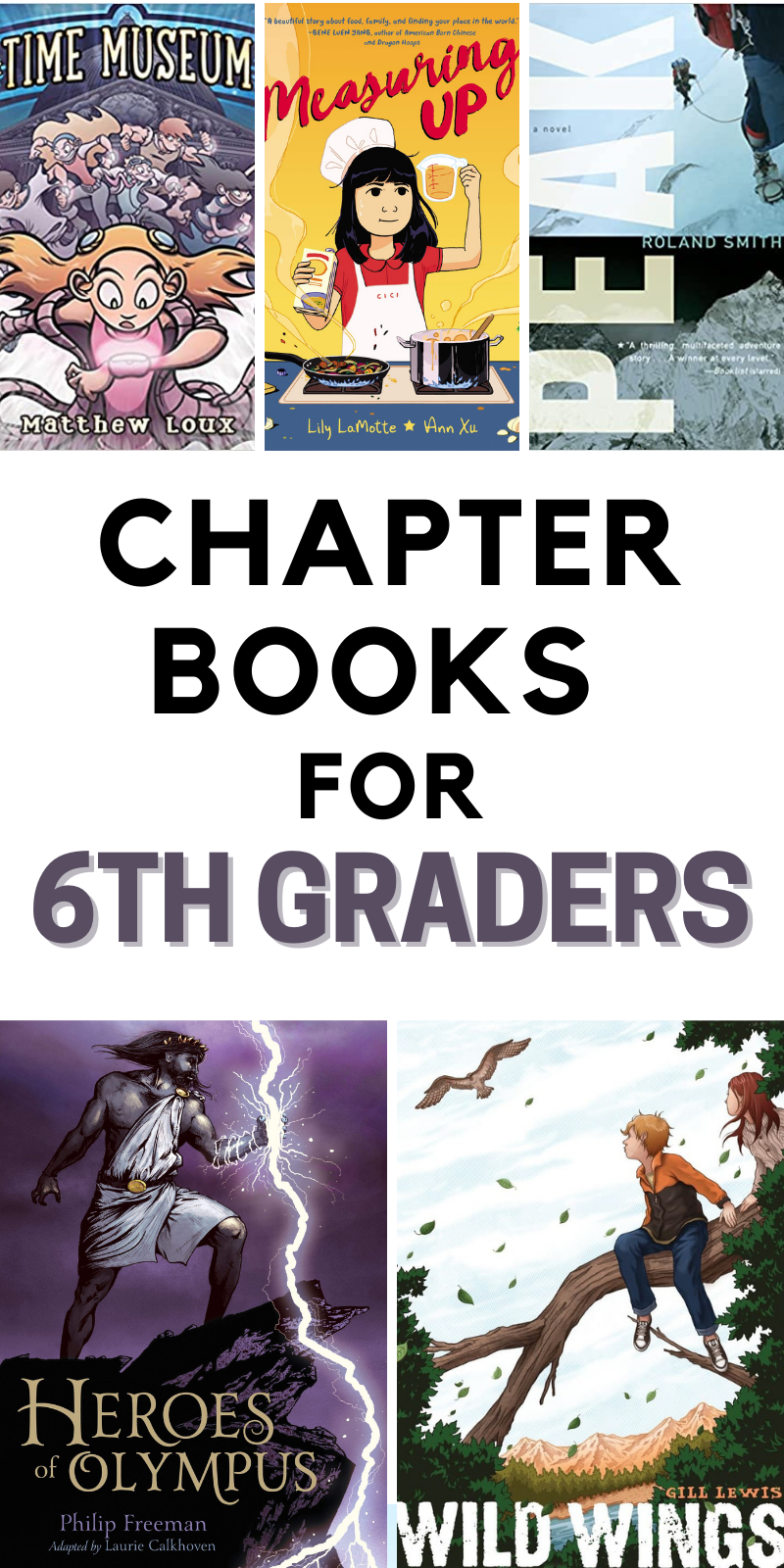 Wild Wings by Gill Lewis
304 pages
Callum and Iona are not a likely pair of friends. Iona is considered pretty crazy by the other kids, and when Callum sees her trespassing on his family’s property, catching a fish with her bare hands, he’s inclined to agree. But then she tells him that she’s discovered a rare and endangered bird and that it’s up to the two of them to protect it from both the elements and the poachers. But it is going to be a lot more difficult than either of them imagined.

What Ella has to say: This was one of my Battle of the Books books, so it was one of those books that I was kind of forced to read. I actually liked it a lot, surprisingly, and I thought it had a really good plot and I really liked the characters. It reminded me a bit of Bridge to Terabithia (spoiler alert!) and I was kind of surprised by the ending because the main event happened so early in the book – it felt like it should have ended at the halfway point but then didn’t and there was ANOTHER main event.

Measuring Up by Lily LaMotte, illustrated by Ann Xu
208 pages
This book showed up on about a million lists and I put it on hold and then Ella snagged it when I picked it up, and read it and returned it before I had a chance to even crack the cover! Good thing she included it on this list so I could be reminded that I still want to read this graphic novel about Cici who has just moved to Seattle from Taiwan and is trying both to fit in at her new school AND figure out how to celebrate her beloved grandmother’s 70th birthday in person.

What Ella has to say: I’d seen this book before and wanted to read it, but the library didn’t have it checked in and so I forgot about it. But then my mom picked it up as a hold and I was thrilled. I really like cooking so it was fun to learn more about Taiwanese food. I liked the illustrations a lot – they were really well done – and the character development was excellent. I hope she writes more graphic novels – I’ll be the first in line to read them!

Heroes of Olympus by Laurie Calkhoven
352 pages
We picked this book out at the library when Ella was looking for book about Greek Mythology (for some reason, she’s very resistant to books that are those large picture book size books but have 150+ pages) and this one caught her eye. It’s a pretty chunky book and doesn’t shy away from the violence and horrors of the original Greek myths but Ella LOVED it and spent a week telling us about every story whenever she had a chance.

What Ella has to say: My mom wanted me to read more about Greek mythology so I checked this book out at the library because it was one of the few books that looked good to me. Greek mythology is surprisingly terrifying but also really interesting. We just read and watched The Lightning Thief as a family, so it was fun to be able to connect some of those characters plus I had read one of the Goddess Girl books too. Also, we’d been learning about the solar system in my Chinese class at school and my teacher had told us which Roman gods they were named after, so I enjoyed figuring out which Roman and Greek gods were the same.

Peak by Roland Smith
256 pages
Peak Marcello comes by his love of climbing naturally – his father (that he’s had no contact with for years) runs a climbing company in Thailand. Peak has a hard time channeling his love into legal climbing though, and gets himself arrested after he scales a skyscraper in New York City. His options are to go to juvie or go live with his father. Obviously the latter sounds better but when he and his father reunite, he discovers that his dad wants him to be the youngest person to ever successfully climb Everest.

What Ella has to say: This was my book club book at school and we chose it a little bit because my teacher said it was good, but mostly because it was short enough to finish by the end of winter break. So with those high standards in mind, we started reading about 70 pages a week. My problem with book club is that I have to stop weekly. I finished it during winter break and I really like to predict endings, but this one really surprised me. This is the kind of ending where you could debate whether it was wrong or right for hours, but I felt great about the ending.

Time Museum by Matthew Loux
256 pages
Delia is thrilled to land a summer internship at the prestigious time museum, but it’s not quite what she expected when she gets paired with a bunch of kids from all across history and their job? Is defending the Time Museum which is going to require brains, courage and a whole lot of time traveling.

What Ella has to say: This book was on an award book list and our school librarian shows us a lot of the award winners a few times a year and as soon as she showed it to us, I was interested in it. But apparently so was everyone else, because it was checked out forever. I finally saw it at the public library and then realized I’d found the second one before reading the first one. I really like the concept