You’ve probably heard Brené Brown’s name – she became a household name when her Ted Talk name garnered more than 30,000,000 views – and her Daring Greatly book is a phenomenal work about vulnerability and shame that every human probably should read. 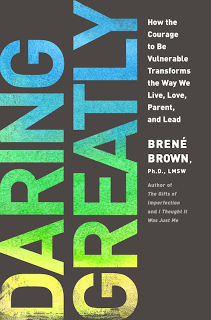 Sometimes I wait a long time after finishing a book to write about it. And sometimes I close the book and immediately am aching to write all about it.

The new Daring Greatly book by Brené Brown? It 100% falls into the latter category.

Before Ella was born, several people, knowing how much I like to read, asked me about what books I’d read in preparation for having a child. And, honestly, the answer was “none.”

I couldn’t get interested in reading about sleep schedules or breastfeeding techniques or how your child will likely grow up to be a serial killer if you don’t do x,y, or z.

Now that I’ve been a parent for two whopping whole years, I can see that the books that really appeal to me as a parent are more about personal development and overall parenting, rather than specific troubleshooting (after all, isn’t that what Google is for?).

Daring Greatly by Brené Brown was just that kind of book. Put this book with The Happiness Project, Nurtureshock, Quiet, and Outliers, and you’d have my ideal reading list for parents (or anyone, frankly).

They are books about figuring out your own values and passing them on to your children. They’re books about doing things that scare you.

They are books you’re sorry I read if you know me in real life because I won’t stop talking about them.

One of the things this book talks a lot about is taking off your armor and really engaging with other people and situations, especially the ones that make you uncomfortable or make you automatically want to cast blame, disengage, or react with anger or self-righteousness. Blame, disengagement, anger and self-righteousness? I am a master of all of those reactions and the research and examples in this book really helped me identify not only how to deal with these reactions (and replace them with better ones), but also how damaging these behaviors are not just to my relationships, but to me personally.

I’ve realized that I really love books that address several topics at once and the cross between self-awareness/development, education, leadership, and parenting in this one was really good. I was just as engaged by the chapters about work and education as I was by the parenting chapter. This really is a book for anyone, I think.

By the way, I noticed that when I was only reading a page or two a night, I had a hard time engaging with this book. But if I’d put aside twenty or thirty minutes, I suddenly couldn’t get enough of Daring Greeatly and I felt like EVERY page was speaking just to me.

Now that I’m done with the book, I almost don’t want to put it on the shelf – I feel like I need to keep it on my bedside table and return to it frequently.

Where does the title for the Daring Greatly book come from?

The title for Brené Brown’s book Daring Greatly comes from a famous quote by Theodore Roosevelt:

It is not the critic who counts; not the man who points out how the strong man stumbles, or where the doer of deeds could have done them better. The credit belongs to the man who is actually in the arena, whose face is marred by dust and sweat and blood; who strives valiantly; who errs, who comes short again and again, because there is no effort without error and shortcoming; but who does actually strive to do the deeds; who knows great enthusiasms, the great devotions; who spends himself in a worthy cause; who at the best knows in the end the triumph of high achievement, and who at the worst, if he fails, at least fails while daring greatly, so that his place shall never be with those cold and timid souls who neither know victory nor defeat.

What about other Brené Brown books?

The good news is that Brené Brown books are plentiful. She has three others that are on related topics.

She has The Gifts of Imperfection: Let Go of Who You Think You’re Supposed to Be and Embrace Who You Are which was written in 2010, Rising Strong: How the Ability to Reset Transforms the Way We Live, Love, Parent, and Lead which was published in 2015 and Braving the Wilderness: The Quest for True Belonging and the Courage to Stand Alone which Brene Brown came out with 2017.

For a quick overview of Brené Brown’s shame and vulnerability research, you can watch her 20 minute Ted Talk here that has garnered more than 30 million views.

If you liked Daring Greatly, you might enjoy these other books too!