I am HERE for October.

I love the excitement of the upcoming holidays, the changing colors on the mountains, the crisp air, and fall break. 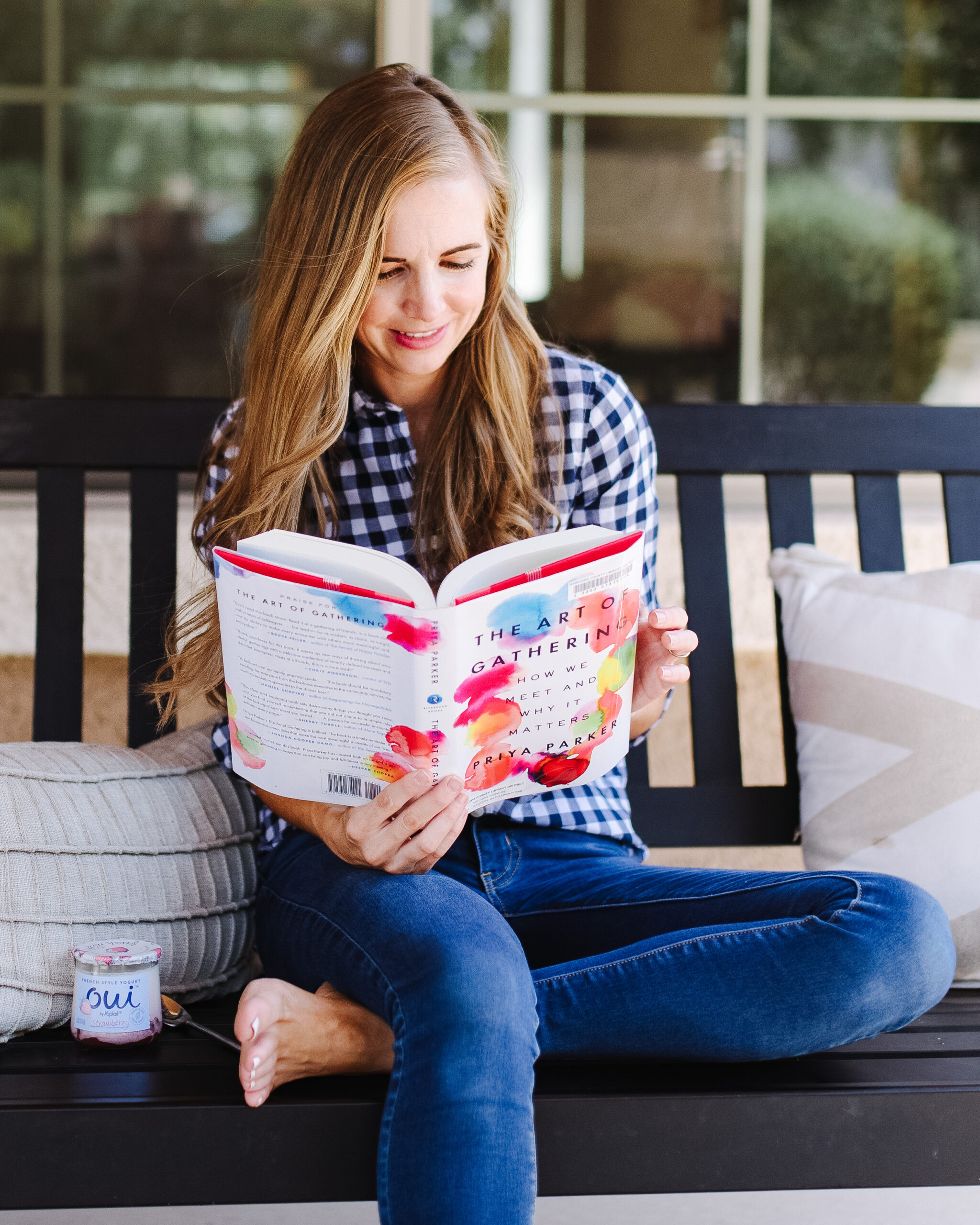 Happier Hour: How to Beat Distraction, Expand Your Time, and Focus on What Matters Most by Cassie Mogilner Holmes
I saw this book mentioned in passing in the most recent edition of Real Simple and of course a title like that is RIGHT up my alley. Hilariously, the day after I picked it up from the library, I got a note from a reader saying, “I just read this book I think you’d really love.” And it was this book. I’m about halfway through it and I’m loving it. (And spending more time outside because of it!).

Swim Team by Johnnie Christmas
I’ve been on a graphic novel kick lately – it’s my favorite thing right now to go out on the back deck and read in the afternoon sunshine for 15-20 minutes before it’s time to start on dinner. It’s especially delightful when Ella joins me and we read together (she’s such a fast reader that I don’t have to wait for her to catch up to me!).

The Art of Gathering by Priya Parker
This is the November book for Everyday Reading Book Club and I’ve been meaning to read it for literally years! It’s such a delight to finally pick up this non-fiction title, especially with all the holiday gatherings coming up.

Amari and the Great Game by B. B. Alston
This is what I’m reading aloud to the girls right now. We read the first Amari book back in the spring and then waited for months for the second one to come out. In this one, Amari Peters is back at the Supernatural Bureau, ready for her work as a Junior Agent. But the pressure against magicians is getting worse and as if that isn’t bad enough, she’s sucked into the Great Game – a competition to decide who will lead the magicians of the world (and will probably result in death if she loses). So far, we’re all loving it – Ella said she thinks it’s better than the first one).

Good Girl, Bad Blood by Holly Jackson
This is the sequel to the October book for Everyday Reading Book Club (A Good Girl’s Guide to Murder) and so far I’m loving it – it’s a perfect listen for October as Pip unwillingly picks back up her detective hat when the older brother of a friend goes missing and the police refuse to do anything about it.

And here’s what my team is reading right now!

Part of Your World by Abby Jimenez
After compiling the responses that were given when Janssen asked about books with good banter, I knew I had to read an Abby Jimenez book. She was suggested quite a few times and this one did not disappoint! Alexis is a high-profile, 37-year old doctor who just got out of an emotionally abusive relationship and has decided men weren’t going to be a big part of the picture anymore. That continues even after meeting small town mayor, Daniel Grant, who is also 10 years her younger. Or so she tries. Their relationship is supposed to be casual, but it isn’t always that simple. The banter and wit in this one is SO good! (heads up for several open door scenes)

The Book of Lost Names by Kristin Harmel
My mother-in-law gave me this book to read after a family vacation together and she always has great historical fiction recommendations. Eva and her mother to flee to the countryside seeking shelter from the Nazi forces after her father is arrested along with thousands of other Jewish people in 1942 France. Becoming involved in an underground resistance movement, Eva begins forging identities for Jewish children escaping to Switzerland. To protect their heritage, she writes their true names in code in a large volume called The Book of Lost Names. As a WWII novel, it was lighter and more romantic, than dark and heavy. The first 20% of the book was a little slow, but I am glad I stuck with it because the remainder of the book was so captivating and it did have me in tears at the end.

Carrie Soto Is Back by Taylor Jenkins Reid
I have read almost all of Taylor Jenkins Reid’s books and enjoyed most of them. Carrie Soto is Back definitely ranks among my favorites. Carrie is a “has-been” tennis player, but comes out of retirement to try to reclaim her Grand Slam record. At thirty-seven she is quite a bit older than the rest of the field, but that doesn’t stop her from training and playing her hardest. The really fun thing about reading a novel by Taylor Jenkins Reid is that I feel like I am reading a nonfiction biography. Her writing, attention to detail, and character development is just so good. It’s also fun because she will reference characters from her other books like Mic Riva from Malibu Rising and it just adds to the immersive and nonfiction feel.