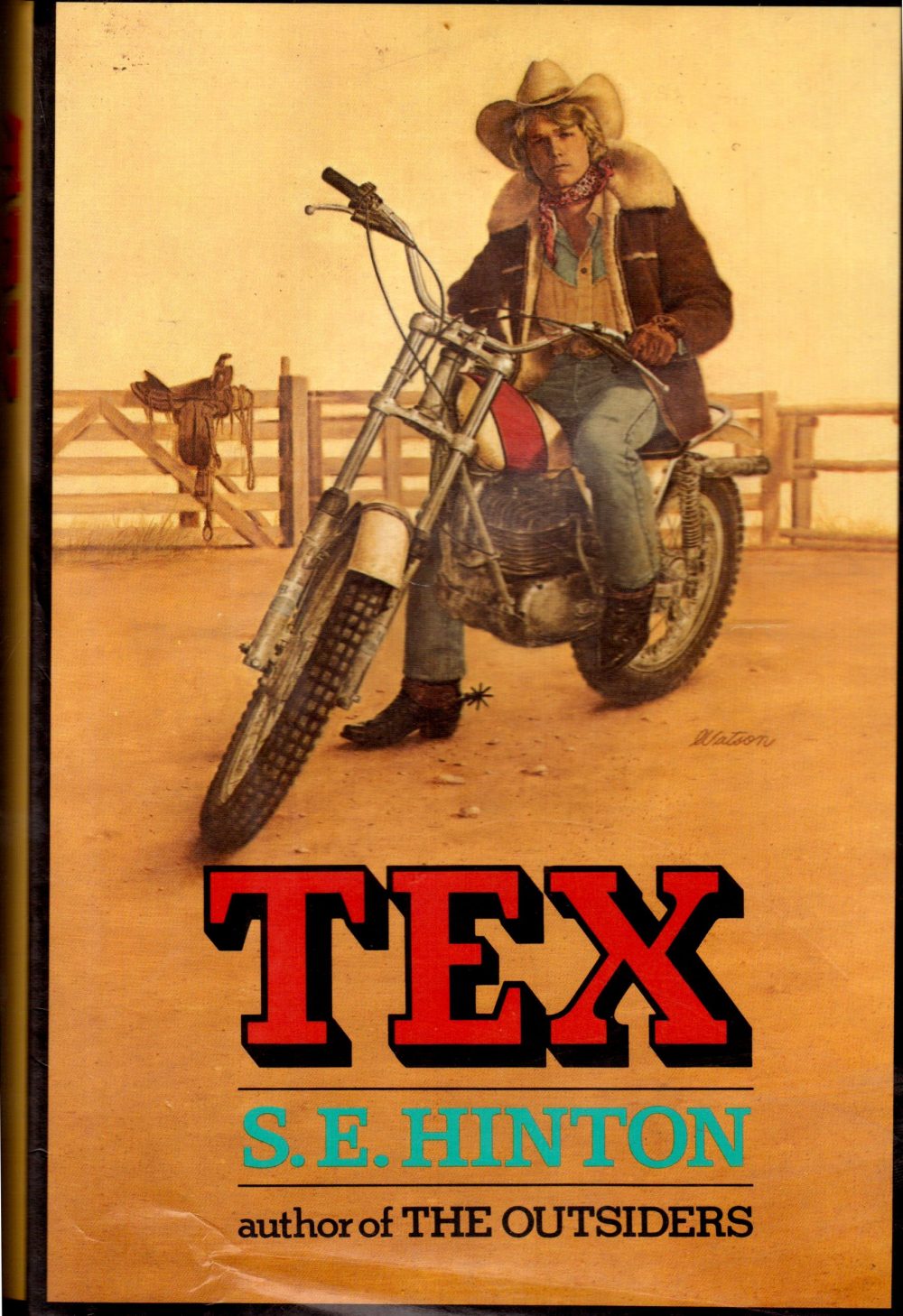 In one of my very first blog posts, I stole a list of 100 Books from Leah’s blog, listing the ones I have and haven’t read. One of the ones I hadn’t read was The Outsiders and oh, I heard from several people I was missing out.

But I never got around to it (in fact, I still have not). However, I was assigned Tex by S.E. Hinton for my Young Adult Literature class and so now I’ve read it and been converted.

It’s not the kind of book I would have expected to like. It had horses, which I don’t care for at all, it had motorcycles whose charms I am also mostly immune to. Frankly, I would almost categorize it as a Western style book, and I rarely do Western style books (although as a kid, I was all about the prairie/horse/wild frontier books – I don’t know what changed).

Anyway, Tex and his older brother live in an old house in a little town with their horses, while their dad is out on the rodeo route most of the summer. Their mother died years earlier of pneumonia. The older brother, Mason, is an amazing basketball player and is determined to get a scholarship to college and get out of podunkville. One of his acquaintances has recently gotten married because he got his girlfriend pregnant and Mason is so paranoid about something – anything – keeping him out of college, that he won’t date for fear that some girl will try and keep him around.

Tex, on the other hand, is pretty happy with life. He has his horse, a dad (mostly absent though he is) that he loves, and Mason who keeps the household running decently well.

But then, when the summer stretches into fall and their dad still isn’t home, Mason, in order to buy food and keep the electricity on, sells the horses without telling Tex. Tex is beside himself, so angry at Mason he can hardly stand it, while Mason is outraged with their father for being such a selfish deadbeat.

The book is almost a series of vignettes, fragments of stories and characters that seem unrelated, but eventually help you understand Tex and his family issues and why he’s alternately so passionate about some things and so laid back about others. There really isn’t all that much to say about it without giving away the whole story.

Early on in the book, though, Tex and some friends go to the fair and visit a gypsy who reads their fortunes and tell them whether they are someone who stays or someone who goes. Tex is someone who stays, he’s told, and he wonders about that. He assumes Mason, had he been there, would have been labeled a goer – someone desperate to move on and up. Is Tex okay being someone who stays? Is he happy enough with his life to stay where he is?

Tex by S.E. Hinton succeeds not based on wild excitement or action or romance or family tension (although all of those are present), but because the characters are strong and easy to relate to, even when you don’t like them.

And now, finally, I’ll go read The Outsiders. (Here’s a fun S.E. Hinton fact…did you know Hinton wrote The Outsiders when she was sixteen? I can hardly remember what I was doing at sixteen, but I assure you it wasn’t writing the book that ushered in a new generation of young adult literature. Sheesh).