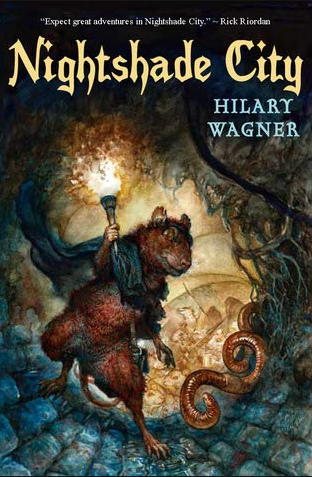 8 of 10: Nightshade City was so far superior to what I expected. This book about an underground rat city ruled by a tyrant was just really well done.

So, I actually kept looking forward to reading about rats. Yes, I am as surprised as you are. Of course, I just reread Mrs. Frisby and the Rats of Nimh this year with the third graders at my schools, so perhaps I was already inclined to be thinking favorably about rats (an animal that in real life makes me truly sick to my stomach).

The action of this Hilary Wagner book takes place mainly in the Catacombs, an underground rat city that was taken over eleven years ago by an outcast rat named Killdeer and his cronies, most notably Billycan who is an escaped lab rat.  Together they’ve killed off most of the rats who were outwardly loyal to the previous government.

Now they demand that all the citizens pay a Stipend of food every week which they use to feed the “Kill Army” which is mainly made up of orphan boys (orphaned because the parents have been killed off or starved to death, generally). You can imagine that life in the Catacombs is getting pretty unpleasant.

The two Nightshade brothers have been without a guardian for sometime now, but they’ve managed to conceal that fact for a while, but when it’s discovered and the military comes to draft them, they take off for the surface (called “Topside”) where they discover the entrance to another rat city.

The city is run by Juniper, a rat thought dead since the takeover eleven years earlier, but he’s indeed alive and well and planning to attack the Catacombs in order to free the inhabitants (he also believes that most of the Kill Army orphans are not really loyal to Killdeer at all and as soon as they are offered a new life, they’ll take it).

Things are moving fast, though, because Juniper is determined to rescue his only remaining family member, a young niece named Clover who is about to be married to Killdeer.

This book is the first in a planned series (the Nightshade Chronicles), but this book doesn’t necessarily serve as a “set-up” book – you dive right into the action and only passing reference is made to things that I’m assuming will be fleshed out in further books (why do the rats live up to 80 years? what exactly caused Killdeer to be exiled? what was the deal with the Nightshade brothers’ famous and beloved father?).

Nightshade City by Hilary Wagner has drawn comparisons to Redwall (oh, how I loved those books as a child) and the Gregor The Overlander books by Suzanne Collins. I haven’t read the Gregor books (Bart has and really loved them), but the Redwall comparison made me think these books would skew a little younger than they do.

And while I can see many older elementary school students enjoying them, I think it really would go better for a middle school audience – it’s an adventure story, yes, but Nightshade City had far more complexity than that would imply. There was so much political maneuvering among the rats and family relationships and difficult decisions to make that you could really have a lot of great discussion about it. The writing was much better than I’d anticipated. This book really was quite masterful. I am amazed to be saying these things about a book about rats and earthworms, but here I am, doing just that.

There is some vague references to Killdeer’s affinity for women and the distasteful fate that awaits Clover after she’s named “The Chosen One.” It is not at all crude or even that noteworthy, but I could see some kids picking up on it and questioning what exactly they’re referring to.

I do wish authors would stop naming characters all very similar names, though – Julius and Juniper and Vincent, Victor, and Virden? I mean, really. Am I just dumb or something?

If you liked this review of nightshade city by hilary wagner, you might also like these books: