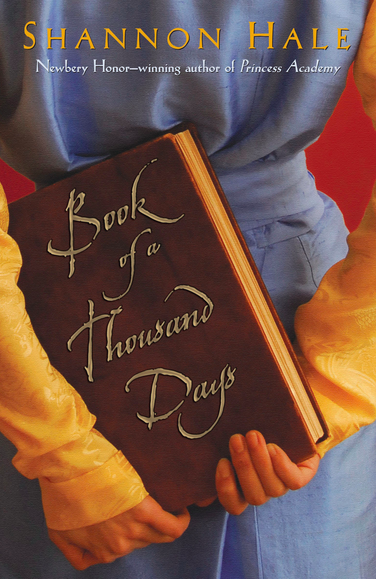 You may remember how last year I was all “Shannon Hale is the best ever! I’ll read all her books and write about them and you’ll just deal with it!” Ahem, I apologize far too late for my craziness (although, to be fair, SHANNON HALE IS THE BEST EVER!).

I loved The Goose Girl and the other books in that series. I really loved Princess Academy. I did not read Austenland: A Novel, but I suspect I won’t love it and thus I haven’t ever gotten myself motivated enough to read more than twenty pages of it.

Also, it was written in diary format which I generally find tedious (I was all about the diary form books when I was a kid, though), so I was sort of turned off to it from the start.

book of a thousand days

The story is about Dashti who is hired to work for Lady Saren. Unfortunately, within days of entering her new employment, Lady Saren refuses to marry an extremely rich (and cruel) suitor since she has already pledged her heart to another. Lady Saren’s father is furious and has a tower built and locks Lady Saren and Dashti in it for seven years. After a long period of time, the original suitor, Tegas, arrives and calls through one of the waste chutes (they can hear through it but not see each other). Lady Saren, however, has become more and more distressed and unstable since their arrival and begs Dashti to speak for her.

Dashti and Tegus speak together over the course of several days and she begins to find herself attracted to him. But he and his men are chased off by the scorned suitor who tries to break into the tower and fails.

A few months later, as Lady Saren slips deeper into madness and Dashti begins to realize that their food stores will not last, Dashti finds a crack in the stones and digs her way out. But when they return to the city, they find it razed to the ground by the scorned suitor and Lady Saren’s family seems to all be dead.

Fearful for their lives, Dashti decides to get both of them to Tegus’ city where she feels sure they can find work and hopefully protection. Ideally, Saren will tell Tegus who she is and they’ll be married, but Saren refuses as she seems to have some idea that Tegus will kill her (Dashti feels sure this is not true).

So they go and start working in the kitchen. But, fairly soon Tegus discovers that Dashti can read and write and also has some rather extraordinary healing powers and, not realizing she’s the girl from the tower that he spoke with, begins asking her to help him with the tasks of a scribe.

And now Dashti can’t decide how to best proceed – should she confess who Saren is or is it possible that Tegus loves her instead and might marry her? Unfortunately, he’s betrothed again, since he believes that Lady Saren is dead. And worst of all, the scorned suitor and his mighty armies are now approaching this city to try and destroy it as well.

One thing I didn’t particularly love about Book of a Thousand Days was how the whole story wrapped up. When I read The Goose Girl, I was really pleased by how surprised I was by the ending and how cleanly it tied up the threads of the plot. This book felt a bit rushed at the end and a little choppy (imagine trying to shove your foot into a child’s shoe – the last ten pages felt a lot like that. If you really do wear a child’s shoe, well, forgive the analogy). I can forgive a book a lot of things if the ending is strong. On the other hand, it’ll take a lot for me to still like a book with a weak or disappointing ending.

If you liked this review of book of a thousand days, you might also like these books: