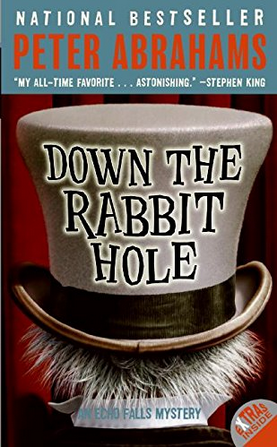 Down the Rabbit Hole by Peter Abrahams is another book on the “Children’s/YA books that Adults will Enjoy” list from Jen’s Book Blog.

down the rabbit hole

Ingrid is at the orthodontists (what a joyful experience that is) and her mom has not yet arrived to pick her up and take her to soccer practice. Worried about being late (if she misses practice, she doesn’t get to play in the next game), Ingrid decides to walk as it’s not terribly far. But somehow she gets herself lost and ends up outside the house of Cracked-Up Katie, a strange and rather infamous middle-aged woman in the town of Echo Falls.

Katie invites Ingrid in and offers to call her a cab. While they wait for the cab, Katie asks Ingrid about her hobbies, and Ingrid replies that she plays soccer and also enjoys acting in the plays put on by the Prescott Players at Prescott Hall (an old converted mansion formerly owned by the now-died-out Prescots who were the richest family in town). Katie seems surprised by this news and Ingrid takes the pause to pull out her bright red soccer cleats so she can put them on and save a bit of time.

The cab arrives and Ingrid is whisked away to her soccer field. The next day, the newspaper has an old picture of Cracked-Up Katie splashed on the front page along with the news that Katie has been murdered in her apartment. Ingrid is horrified and then even more distraught to realize that she left her soccer cleats (helpfully tagged with her name and address) in Katie’s apartment.

Worried that the police will find them and chuck her in jail, Ingrid decides to go steal them back. She breaks into the house in the middle of the night, crosses the police tape, snags her shoes, and leaps under the bed when she hears someone coming up the stairs. She watches the paint-spattered green Adidas shoes cross the room, pick up something and then drop the playbill for “M is for Murder” with Katie’s picture on the front. The intruder retrieves the playbill and takes off.

The next morning, two drunks are arrested for the murder, but Ingrid feels sure they are not the ones. She feels responsible to find the green Adidas-wearer and see him brought to justice. And in the meantime, it’d be good if she didn’t get caught doing something that makes her look like the guilty party.

In Down the Rabbit Hole by Peter Abrahams, Abrahams does an excellent job of weaving the murder case into the everyday thread of Ingrid’s life – her vague interest in the policeman’s son, her poor grades in math, the acquisition of a new dog, her athletic and strange brother, and her role as Alice in the play at Prescott Hall.

It’s fun as the reader to have the mystery unfolded for you just a step or two ahead of Ingrid so you know what she doesn’t. It’s not that annoying “HELLO!!! YOU MORON!” sort of ahead-ness either. Ingrid is completely enjoyable as a main character and you want her to succeed.

In the end Ingrid finds the murderer and is killed by him. The end. (Just kidding – of course that’s not the end; it’s a young adult book. You should read Down the Rabbit Hole by Peter Abrahams though, and find out for yourself how it ends).

Also, would any REAL 13-year-old sneak into a murder scene in the middle of the night? Seriously.

If you liked this review of down the rabbit hole by peter abrahams, you might also like these books: