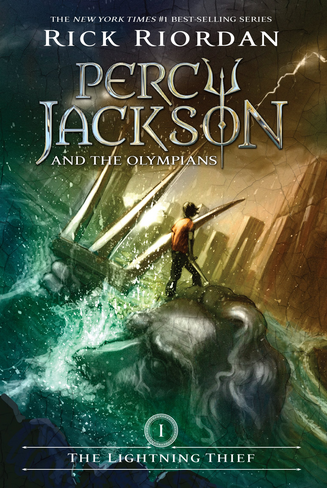 Originally, we checked The Lightning Thief out of the library for Bart, but it looked intriguing and I read it too. It took me over three weeks to read the whole thing (since I read a number of books in the meantime, and Bart was also reading it) and I’m still not entirely sure how I felt about it. It was a quick read and enjoyable, but not exactly memorable and not gripping, either.

Percy Jackson is the main character and he’s spent his twelve years of life thus far bouncing from school to school. He’s severely ADHD, dyslexic, and often gets into trouble both academically and outside the classroom. And weird things happen to him; having a borrowed pen turn into a sword that can be used to kill your math teacher is not exactly normal.

His mom, whom he adores, is married to “Smelly Gabe,” the stepfather Percy despises. Percy doesn’t know much about his real father, as his mom seems loathe to mention him, although Percy has vague memories of him as a loving man. Basically, Percy’s life is pretty insane.

After Percy is expelled from yet another school, he returns home to Manhattan with his only friend from school, Grover, whom he ditches immediately and goes home to see his mom. His mom tells him to pack his bags – they are going on a little trip to the beach for the weekend, without the company of Smelly Gabe, who threatens his mom if his beloved Camero comes home with a single scratch.

Unfortunately, their trip is cut short when Grover arrives at their beach house door in the middle of the night, warning them that “they” are after them. As they try to escape in the Camero, they are attacked by the Minotaur. Percy’s mom disappears in a flash of golden light and Grover and Percy escape into a mysterious camp called “Half-blood Hill” where Percy learns he’s a half god. His mysterious father is an Olympian god, although no one knows for sure which god he belongs to.

Things get going quickly after this revelation – someone has stolen Zeus’ master bolt and most of the gods believe it was Hades who took it in an attempt to frame Poseidon. If it hasn’t been returned in two weeks, the three gods will go to war and wreak havoc on the world. So Percy needs to get himself to the Underworld, get the bolt back from Hades and return it to Mount Olympus (located on the 600th floor of the Empire State Building) before the two weeks are up. Have fun storming the castle, boys.

At first, I thought I wouldn’t be able to stand Percy as the protaganist, but he grew on me quickly and turned out to be quite likeable indeed. In fact, many of the characters are downright fantastic in The Lightning Thief, although I was personally more taken with the minor characters than the major characters.

I liked seeing all the references to Greek mythology and watching the characters, stories, and details get tied into the modern story line. Some parts made me laugh out loud, particularly the scenes in the Underworld with Hades (when Percy accuses Hades of trying to start a war on earth in order to gain additional tenants for his kingdom, Hades scoffs ” Have you any idea how much my kingdom has swollen in this past century alone, how many subdivisions I’ve had to open?”).

The Lightning Thief ends on a bit of a cliffhanger and yet. . . I feel completely neutral about reading the next book. If Bart got it, I might pick it up and read it. Or I might not.