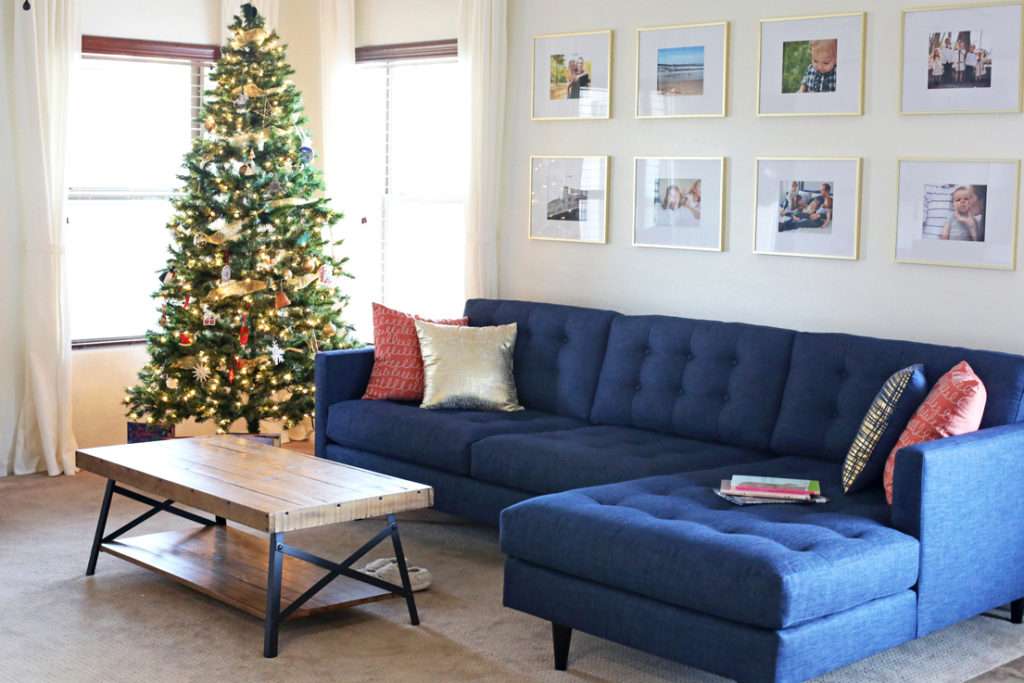 I tend to try to do as much rearranging and reusing of things in our house as possible.

When we redid Ella’s room this year, the only new furniture we needed was a bed frame. Everything else got re-used from various rooms in our house and worked beautifully in there.

It’s a fun challenge to get old things to work in new spaces.

But then, there are things that just can’t really be worked around.

In our family room, the giant stone entertainment center was one of those things. There was no way that was ever going to look really good – the most we could hope for was “not blindingly ugly.” Until we ripped that thing out (post about that coming soon), there was just no way we’d ever have a family room we really loved.

The other roadblock in the family room was the couch. 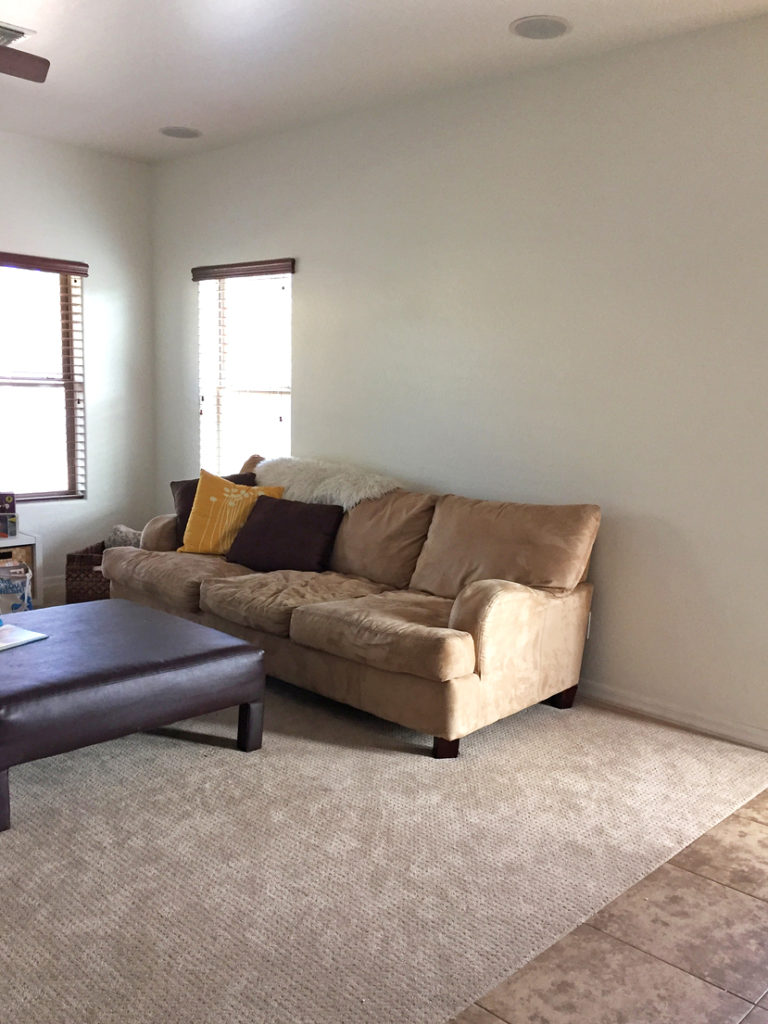 (This photo looks like it was taken the day we moved in. This was actually just a few months ago – you can understand why I’ve loathed this room for the last year).

Our previous couch was the first couch we’d ever bought.

We’d just moved back to Texas from Boston and had zero furniture, so we were on a tight timeline to buy something since sitting on the floor was getting old extremely fast.

We also had no idea what our style really was (let’s be honest, we had no style at all), plus we were feeling fairly broke from having just moved cross-country and replacing practically everything we owned.

Bart loved this couch for one reason – it was very comfy.

(A few months after we bought it, some friends came over and when the wife sat down on the couch, she said, “Bart picked this couch, didn’t he? A woman would never pick a couch this deep – I’m not sure I’ll be able get back off it!”).

I basically tolerated this couch for the last six years, but when we moved into this house, my neutral feelings tipped instantly into dislike, which only deepened over the past year.

This house is already SO brown (brown tile, brown blinds, brown ceiling fans, brown cabinetry), that a tan couch was just such an eyesore in there.

And the couch had zero style – it basically looked like a fat lump sitting against the wall. Plus, after six years of kids jumping on it, moving multiple times across the country, hundreds of nursing sessions, and many a bowl of ice cream, it wasn’t in the greatest shape.

I could hardly even stand to look at it anymore.

After looking at couches for the last couple of years, I had a pretty clear idea of what I wanted.

I knew we wanted a couch that was a color (no more browns, thank you) and dark enough that it wouldn’t show every smudge or stain.

Bart was also completely set on having a chaise lounge of some kind (he’s been saying for years he wanted a sectional, but it turns out he actually didn’t care about a sectional at all – he just wanted the chaise lounge section, which is good because I didn’t want a true sectional).

I was all for the chaise lounge part because of the set-up of the room, which needed some definition to keep it from spilling into the breakfast nook.

And most of all, I wanted something with some style, instead of just being a big lumpy couch.

Fortunately, this Beverly sectional made both of our dreams come true.

It had the required chaise lounge. Check.

It had style (that tufting? those mid-century legs?). Check. 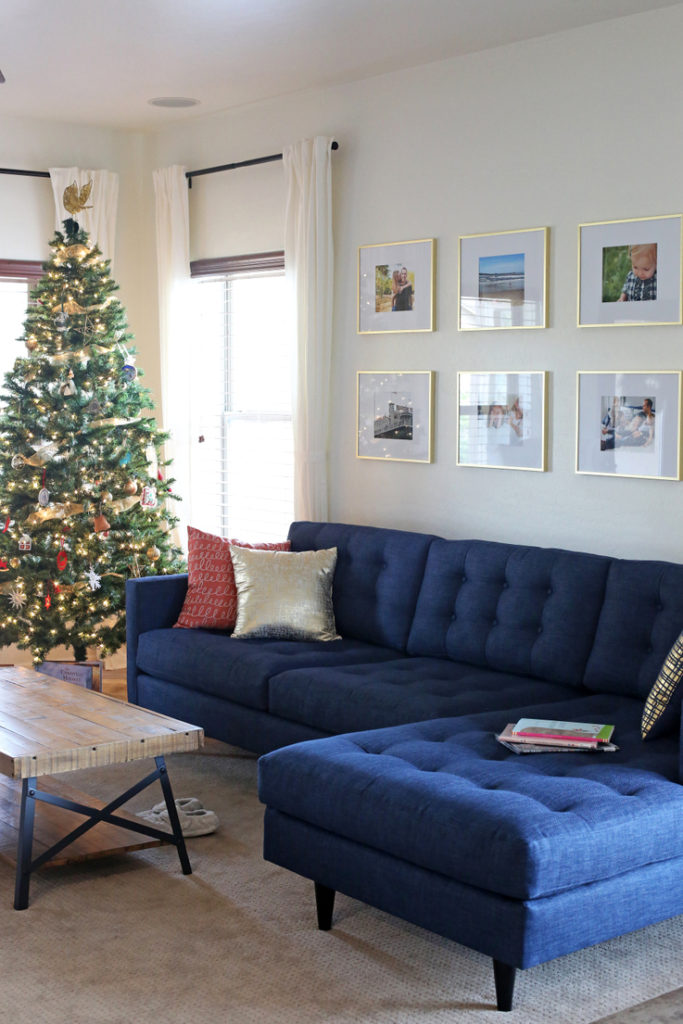 From the moment it arrived, it changed the entire feel of the room. It gave the room structure, color, and style, and it’s now a place where I actually like to be, rather than a room where I wanted to just avert my eyes (hard to do since 90% of our living takes place in this space).

It’s also quite a bit longer than our previous couch, so we have more sitting space and it uses up the room a lot better. I basically love everything about it.

Even now, after nearly a month, I love coming up the stairs from the basement and seeing it or looking over from the kitchen sink and watching the girls snuggled up on it with books.

We FINALLY hung something on the wall (these picture frames were super affordable and every picture looks fab in them) and got a real coffee table, and even though there’s plenty of work still to do in the room, the difference is crazy. 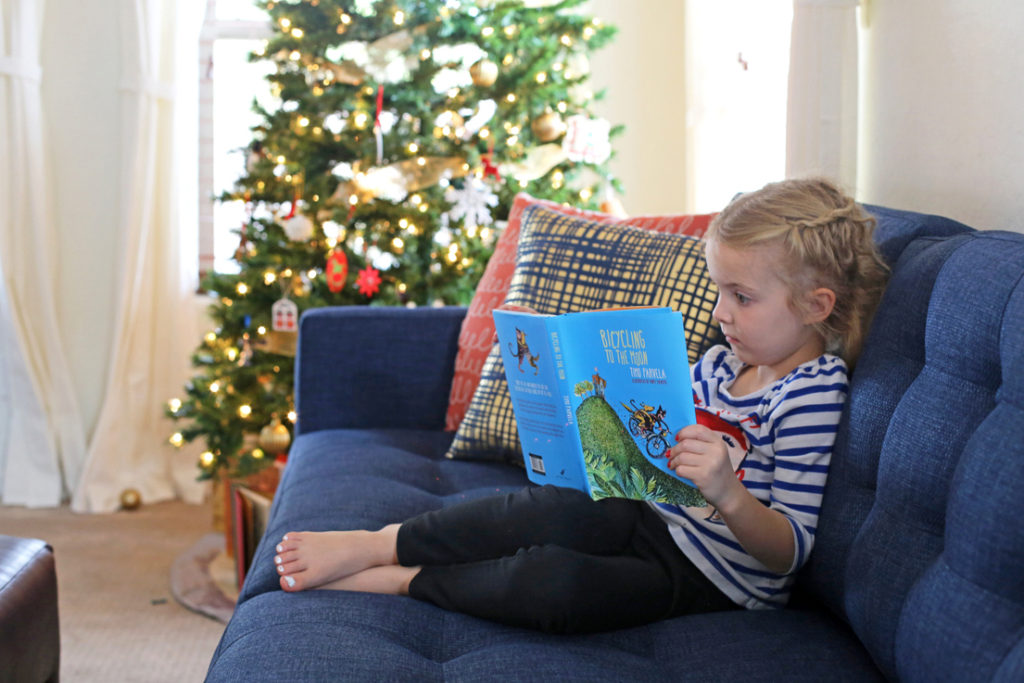 I’d never ordered anything from Apt2B before, but I’ve been super impressed with everything about my experience.

I love that there are so many options in upholstery (the couch we picked had 31 different color choices – we went with navy), and their items are all such fun styles – I feel like we could have picked any of a dozen sofas and been delighted.

Plus, they have a 100% happiness guarantee and easy returns, which are both very important to me.

The couch shipped quickly, it was delivered right in the window they promised (is there anything more obnoxious than waiting around for four hours and then the delivery guys show up 3 hours after that window has passed?), the delivery men unpacked, assembled and arranged the whole thing, including taking away all the packaging, and were gone in less than ten minutes, leaving me to spend the rest of the day ogling our new sofa.

And they have such other fun things, like my dream dining room table and this gorgeous office chair that I desperately need (my $4 Goodwill chair is now so wobbly and loose that I have actually fallen off it in the last month. It wasn’t my most graceful moment).

Once this couch came, we moved our old couch down to the basement, where it works much better, but after one day with the new couch, Bart said, “I think we might need to get another one of these for the basement. It’s just SUCH a much nicer couch in every way.”

And I can’t disagree. 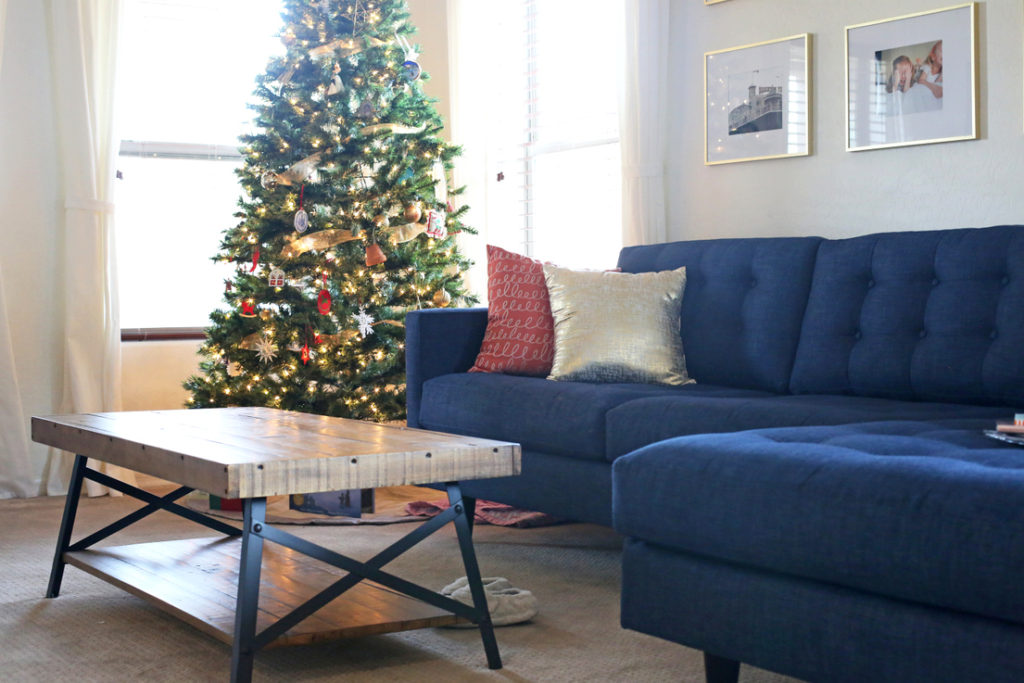