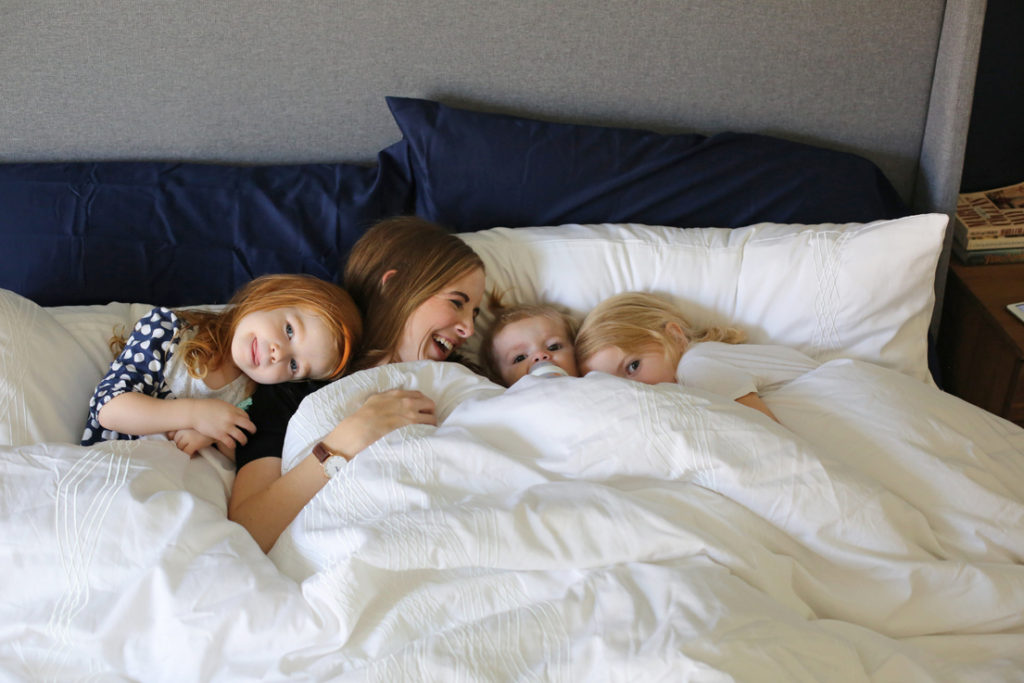 In a few weeks, Bart and I will celebrate our 11th anniversary.

Basically the only thing I wanted this year was to upgrade to a king-size mattress.

Bart had pushed to switch when we moved back to Texas from Boston and had to buy a new bed anyway, but we were so tight for money that the idea of buying completely new bedding in addition to a more expensive bed frame and mattress convinced us to go with another queen. Plus, our bedroom was pretty small and I worried that, with a king bed, we’d barely be able to open our closet door.

When we left North Carolina last year, we were the proud owners of FOUR queen mattresses.

In addition to the one we’d bought in 2010, we also had bought one from a neighbor for a whopping $10 when they were moving so we could have a real bed in our guest room. Queen bed #2.

Then when we came back after London and had a house with no furniture, some friends, wisely upgrading to a king, sold us their entire master bedroom set for less than $100. Queen bed #3.

And a week later, my cousin and his pregnant wife came to visit and I just couldn’t stand the thought of making her sleep on our fairly terrible air mattress, so we got a free mattress and box spring set from a couple who’d just moved in together and was looking to get rid of one of their almost-brand-new queens. And now we had four queen beds.

One of the mattresses was so truly terrible that we got rid of it when we left North Carolina, so we arrived in Arizona with only three queen beds to our name.

But now we had a bigger master bedroom, and since our bed is Grand Central Station every morning, with all the girls piling in with us, wanting Bart to tell them stories or me to read them books or just tell us rambling renditions of their dreams, we were ready to make the move to a king. 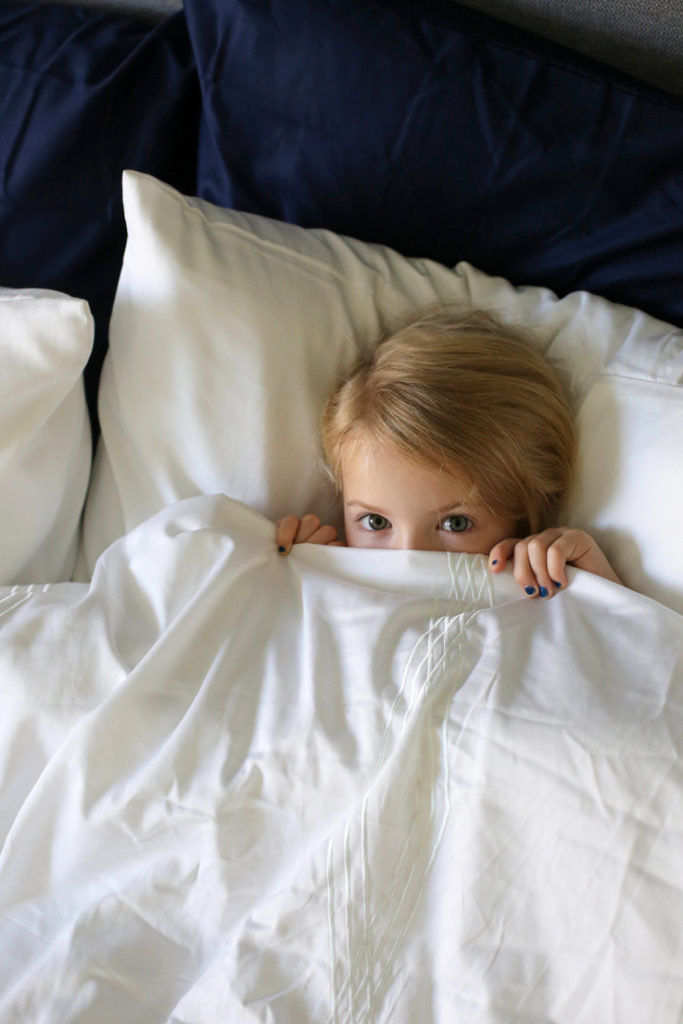 I’ve seen tons of ads and blog posts over the last few years for mail-order mattresses, and it just so happens that Tuft & Needle is based here in Phoenix. And when they offered to send us a king size mattress, it took me all of thirty seconds to accept.

Of course, immediately, I started worrying that we’d hate it.

I come from a family of pretty picky mattress users.

My parents inherited a mattress and bed set when they were married and the mattress was so bad that for a few months, my dad slept on the floor because it was so painful for him to sleep on that mattress (when the mattress was finally replaced, the delivery guys put the old mattress against the wall and it was so floppy and lifeless that it curled into an S at the bottom of the floor).

A few years later, when they upgraded to a queen mattress, they bought one that was so hard, it was basically like sleeping on a cement slab (they still have this mattress in one of the guest rooms that we occasionally sleep in. I sleep on my stomach and I always wake up with my ear and neck completely stiff from basically lying on concrete for 8 hours).

Just before we got married, my parents got a king mattress and a few weeks later, my dad and I went on a quick trip to Milwaukee before my wedding. I remember clearly lying in bed in the hotel room in the dark and my dad’s voice coming from his bed on the other side of the hotel room saying, “I’m really missing my mattress right now.”

So yes, we don’t take mattresses lightly in our family (this from someone who owns mainly garage sale/Craigslist mattresses). This was just one more reason I hesitated to buy a king mattress back in 2010 – I didn’t want to buy a mattress I’d end up really unhappy with and then be stuck with it for the next few decades.

That was one thing I immediately loved about Tuft & Needle – there was just one perfect mattress. All you pick is the size you need, and you’re ready to order. No decision fatigue required.

It shipped quickly and arrived on our doorstep in a very reasonable-sized box, which was good because our new bed frame didn’t arrive for nearly another month and that Tuft & Needle box sat just outside our bedroom for weeks and weeks.

When our bed frame finally arrived, we finally got to unpack that box and pull out the mattress. 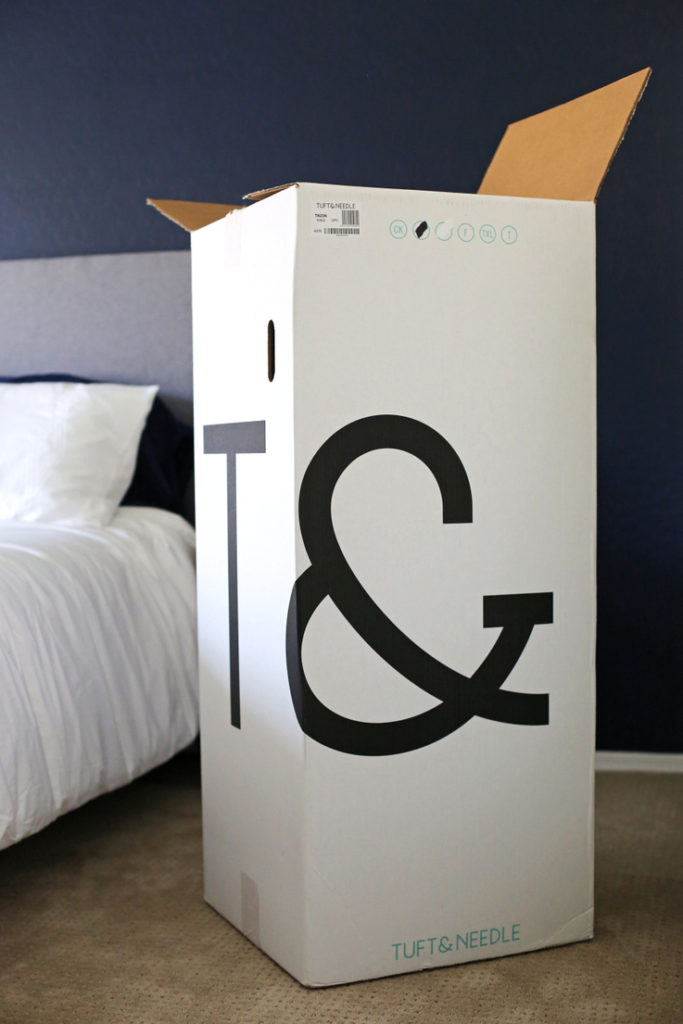 Bart laid it on the bed and I had a sudden horrible worry that they’d sent us a twin mattress by mistake. But I checked the tag and it said King and 10 minutes later, it was clear it was NOT a twin mattress. Within an hour, the whole thing had expanded into a gloriously not-Queen size King mattress.

My main concern was that I’d heard that Tuft & Needle was on the firmer side, and I wondered. . .how firm are we talking about?

But before bed that night, I did a little reading and saw that Tuft & Needle had adjusted their mattress foam in the last two years to be softer.

And indeed, when we crawled into bed that night, the mattress was just about perfect – not too hard and not too soft.

We’ve been sleeping on this mattress for a couple of weeks now, and I love it more every night. It really is just about perfect. It’s like sleeping in a really great hotel every night (although we’ve slept in a queen bed for a decade, we both basically refuse to sleep in anything besides a king on vacation – if the room has two queens, we each take our own).

Also, I’m a super hot sleeper, so I love that the Tuft & Needle foam is designed to draw heat away from your body all night long. It’s like the people who developed this sleep in a place where it’s 113 degrees all summer. . . .

It’s also just a very reasonably priced mattress – a king mattress is $750 – and if you don’t like it, you have 100 days to get a full refund.

My main complaint is that it doesn’t come with some sort of technology that makes my children sleep in a few extra hours. If the engineers at Tuft and Needle want to get started on that, I’d really appreciate it. 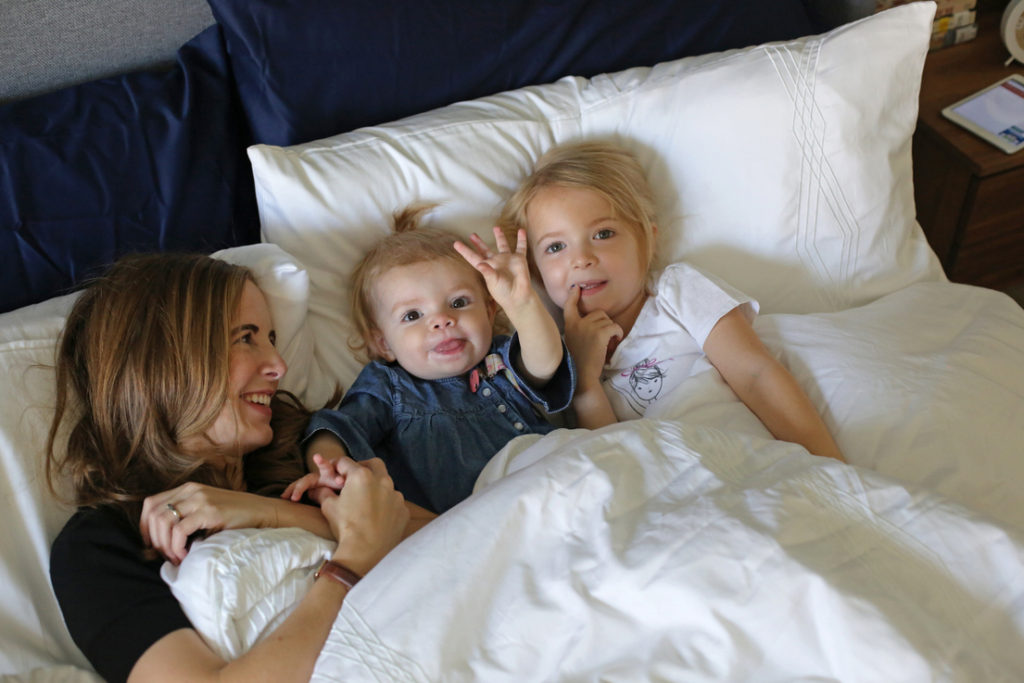