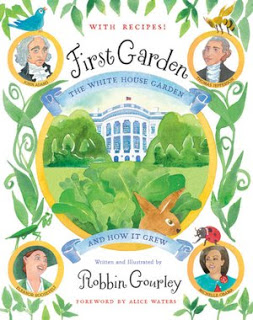 You had to have know that if there was a book about food nominated for the Cybils, I was going to be forced to write about it. Forced!

Happily, First Garden didn’t disappoint me.  It sucked me in with the history of the White House grounds and the children of presidents’ who have played (and married) there.

Then it went specifically into the White House gardens of the past (did you know that the last vegetable garden on White House grounds was during WWII when Eleanor Roosevelt planted one to encourage Americans to plant their own Victory gardens?) before detailing how Mrs. Obama got the current one launched, with help from children at a local elementary school.

I loved the bit about special problems of a White House garden (the wind from the president’s helicopter necessitated a concrete base for the beehive), and then the descriptions of how the food from the garden was used.

The last pages talk about how gardening encourages independence and self-reliance, a section about why gardening is a good idea, and ends with recipes the White House kitchen use to incorporate the produce from the garden.

Every bit of this book appealed to me – the cheerful illustrations, the great historical tidbits, the recipes, and the success of the current garden.

Also, apparently President Obama doesn’t like beets. Has he ever had them roasted? I must conclude he has not, because no one could dislike a roasted beet, could they?


Copy checked out from my local library