There’s something so magical about the moon, isn’t there?

With the 50 year anniversary of the moon landing this weekend, this seemed like the perfect time to share some of our favorite children’s books about the moon.

Some of them focus on the moon landing, while others are sweet fictional stories about the moon.

I hope you’ll love them as much as we have! 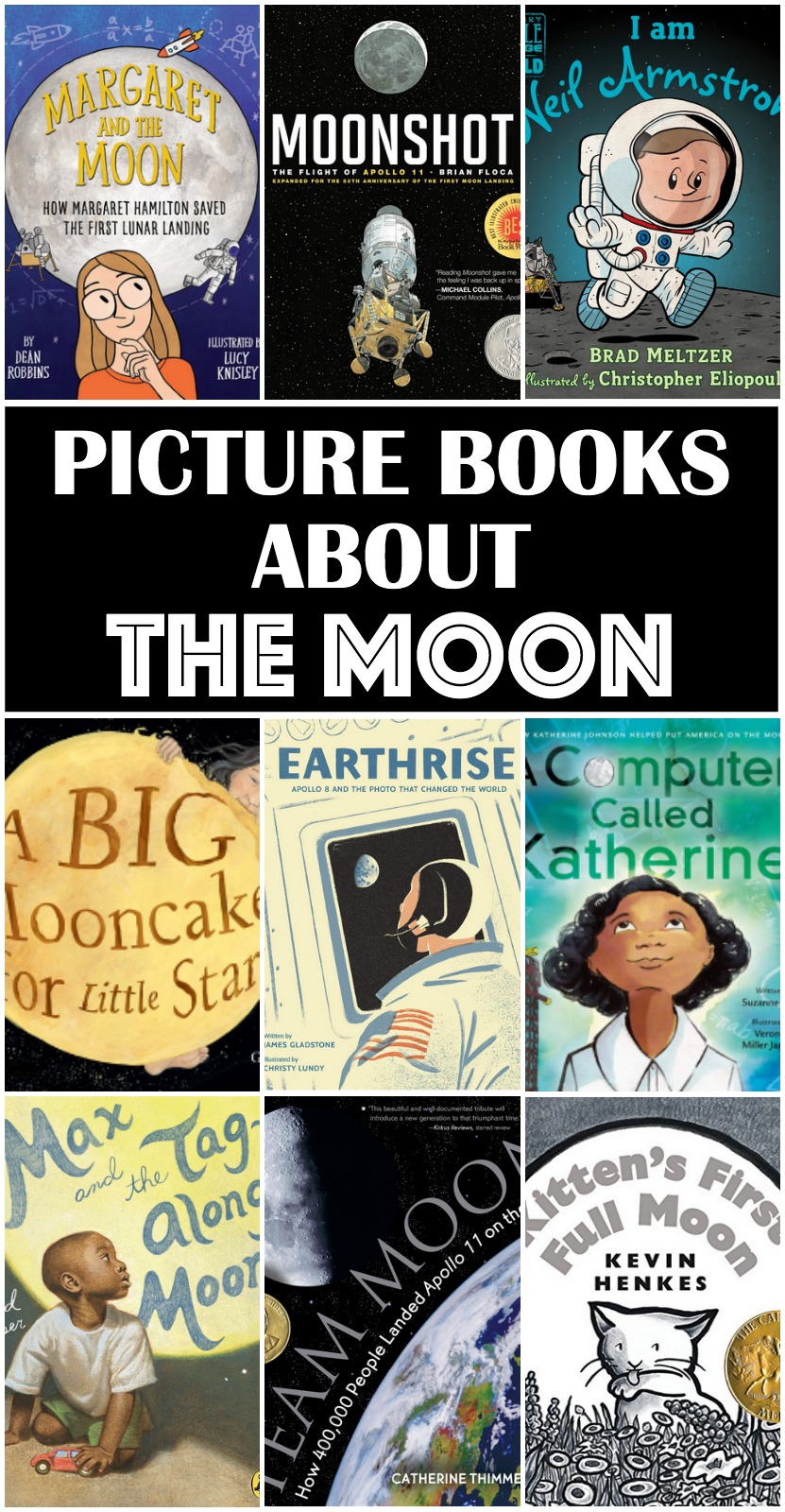 9 Children’s Books about the Moon

Moonshot: The Flight of Apollo 11 by Brian Floca
I love Brian Floca and I think Moonshot does a magnificent job of capturing the wonder, the excitement and the nervousness of that very first moon landing in both text and illustrations. There is also a new edition that just came out in celebration of the 50 year anniversary.

Kitten’s First Full Moon by Kevin Henkes
I love this sweet Caldecott winner about a little kitten who sees the moon and thinks it is a big bowl of milk. But that bowl of milk is hard to get to! The back and white illustrations give it a quiet, nighttime feel that just works beautifully.

Margaret and the Moon by Dean Robbins, illustrated by Lucy Knisley
This was Star’s FAVORITE book last year – we probably read it 50 times over the course of a month or two. Margaret Hamilton loved math from the time she was a child and eventually became the director of Software Programming at NASA over all of the Apollo missions. She is crucial to the moon landing because just moments before they are supposed to land on the moon, the Eagle (the Apollo 11’s lunar module) has problems and Margaret’s code is vital to bringing the astronauts safely to the face of the moon.

Team Moon: How 400,000 People Landed Apollo 11 on the Moon by Catherine Thimmesh
This is a heftier book (it’s 80 pages long) but it’s a fascinating look at all the skills required by hundreds of thousands of different people to successfully land two men on the moon and then bring the crew of three safely back home.

A Big Mooncake for Little Star by Grace Lin
In this sweet story, Little Star and her mother bake a large mooncake. But when night comes, Little Star can’t seem to keep away from the mooncake, nibbling off a bit of it each day, until it’s completely gone! It’s a clever way to talk about the phases of the moon and the illustrations are stunning.

Earthrise : Apollo 8 and the Photo That Changed the World by James Gladstone
We’re so used to looking at the moon from the earth, but when you go into space, headed for the moon, and watch the earth rise over the moon? Well, that’s a photo you don’t miss taking.

I Am Neil Armstrong by Brad Meltzer, illustrated by Christopher Eliopoulos
I am REALLY into the Ordinary People Change the World series and this was the first one I ever read. It makes the lives of famous people so accessible and both the art and the text are perfectly designed to draw in young readers (or, you know, me).

A Computer Called Katherine: How Katherine Johnson Helped Put America on the Moon by Suzanne Slade, illustrated by Veronica Miller Jamison
I loved this book about Katherine Johnson (you may know her from Hidden Figures) and how her love of math led her to NASA where she became so trusted by the astronauts that Alan Shepard wouldn’t make his space flight until she’d manually verified the calculations made by the computers.

We spent the last several days in St. George for

Do you use the Amazon First Reads program? If you

Which of these three books would you choose to tak

A few weeks ago, I asked for suggestions for child

GIVEAWAY CLOSED and winners have been contacted vi