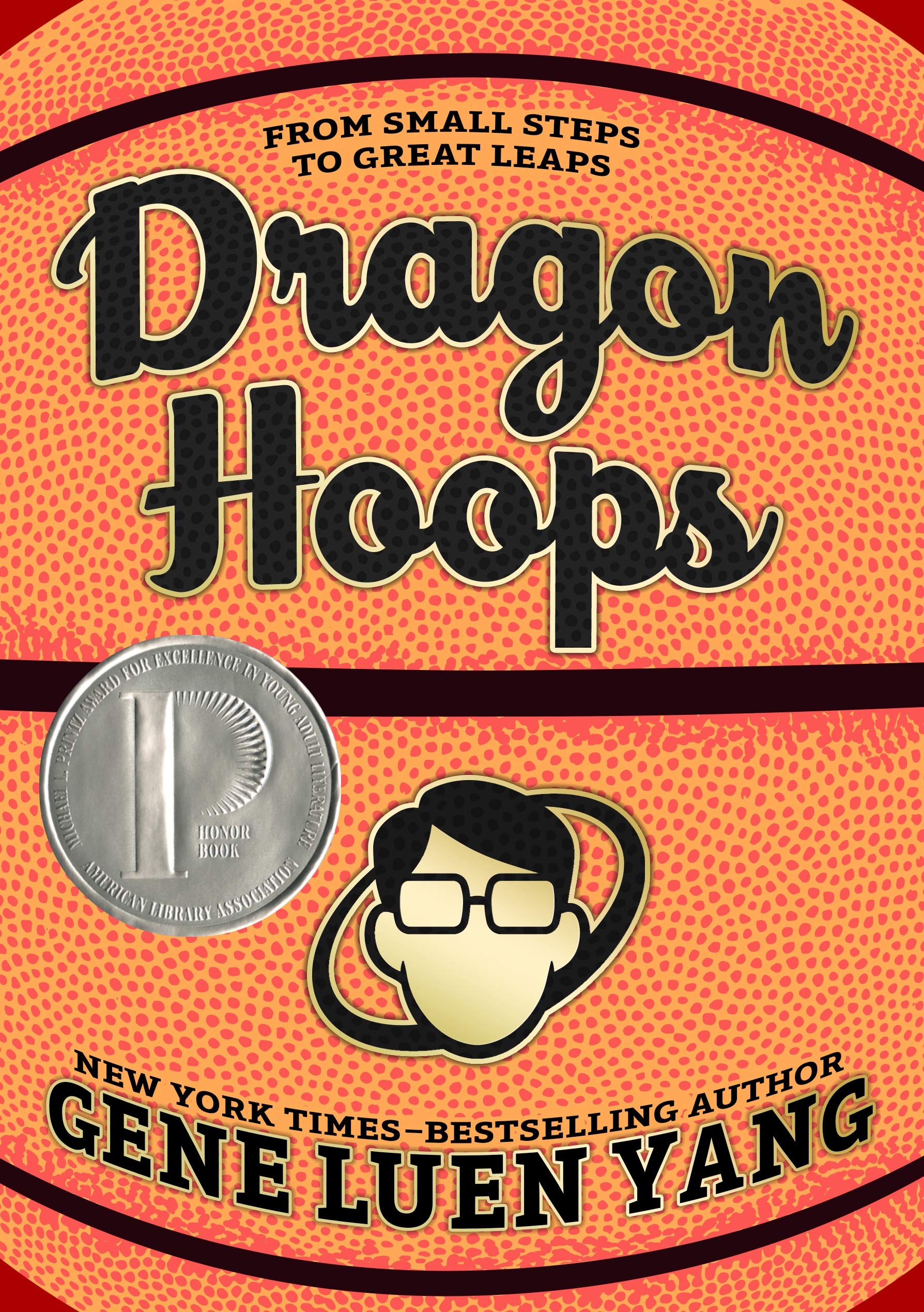 One of my reading goals this year was to read more graphic novels.

So when Dragon Hoops snagged a Printz award at the end of January and people were going nuts about how good it was, it didn’t take me many minutes to snag a copy at my library.

Dragon Hoops is a true story – the author, Gene Yang, is a teacher at Bishop O’Dowd High School in Oakland California.

He’s also written a couple of really successful graphic novels but it’s been more than a year since his last book was released and he’s struggling to find a new idea for his next one.

And then he starts hearing a lot of buzz about basketball at Bishop O’Dowd.

Gene is most decidedly NOT a sports guy, but he IS a story guy and if there’s a good story here? Maybe it’s worth investigating.

He crosses campus to the gym (a place he has RARELY visited in his years of teaching) and meets Coach Lou Richie.

And within 10 minutes, he knows this is his next story.

In 1988, Lou is a junior on the O’Dowd basketball team and they make it to the State Championship.  It’s the O’Dowd Dragons’ third trip to the state championship but they’ve never managed to actually win it.

In the final seven seconds of the game, the Dragons are down by 1 point and Lou goes in for a jump shot and it goes in.

And then the refs reverse the basket, calling offensive goaltending and the Dragons lose.

It’s the most controversial call in the history of California high school basketball and on the replay videos, it’s almost impossible to tell that there was any interference or not.

More than a decade later, Lou returns to Bishop O’Dowd as a basketball coach.

Under his coaching, the team has gone to the state championship game FIVE MORE TIMES. And lost every single time.

Dragon Hoops is the story of that year.

One of the things that makes Dragon Hoops SO excellent is that it’s not just the story of a basketball team.

There is also so much history about basketball – how it was invented and how it took off and how it gained popularity around the world.

As you get to know each of the basketball players, Yang also gives a lot of background around them and the decades of history that led to them being Dragons.

For instance, in the chapter about Qianjun – an exchange student from China – there’s a lot of backstory about how basketball took off in China and how Yao Ming became an NBA legend.

In the chapter about Arinze, Yang shares the story of his sister Oderah – also an O’Dowd basketball star who goes on to play for Duke University – and how women’s basketball began and how it’s changed over the years.

One chapter talks about early regional teams like the Harlem Globetrotters and early segregation of basketball teams and racial tensions between teams and players and spectators.

This kind of backstory and history COULD make the storyline drag. But in Yang’s hands, it’s absolutely fascinating and makes the whole story feel richer and more meaningful.

And, of course, you’re wondering the whole time. . . .will they make it to the State championship game and if they get there, can they manage to finally win it?

I purposefully didn’t allow myself to google the names of anyone in the book while I was reading because I didn’t want the ending ruined for me.

And I certainly won’t ruin it for you here.

What I WILL do is tell you that this book is 100% worth your reading time.

Even if you don’t usually read graphic novels.

Even if you care zero about basketball.

I loved every page of it (and then regaled Bart with chapter by chapter replays, including walking him through the final pages of the book because they were just SO GOOD).

And then I read every single end note too.

If you’ve read Dragon Hoops too, I’d love to hear what you thought of it!