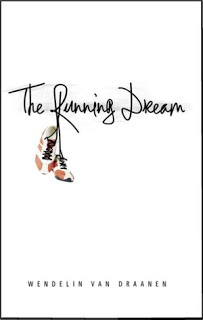 It is really a nice thing when the first book you read in a year is not terrible. In fact, The Running Dream was quite excellent.

Kelly recommended it to me a while ago and, while we have quite different taste sometimes, she has a knack for knowing what books I will enjoy. And, as usual, she was not wrong with The Running Dream.

Jessica wakes up in the hospital to find that her leg is gone, amputated just below the knee. This would be awful enough on its own, but Jessica is a runner – on the day of the accident, in fact, she’s just won a big race at her school’s track meet.

After the meet, the school bus is hit by a drunk driver and Jessica’s leg is crushed beyond repair.

Now life as she knows it is over. Everything is now an enormous effort – going up stairs, getting into the shower, driving, attending school. At first she doesn’t even want to leave the house and she isolates many of her friends who are trying hard to maintain a relationship. Only her best friend, Fiona, refuses to be pushed away.

When Jessica finally returns to school, she can’t maneuver her wheel chair to her old desk, so she is seated by a girl in her math class, Rosa, with cerebral palsy. She’s seen her, of course, over the years, but knows nothing about her, not even why she’s in a wheel chair. At first she’s uncomfortable around Rosa, but as she gets better at understanding her (she has a fairly significant speech impediment), she discovers that Rosa is funny and kind and good at math, which is a huge boon to Jessica who was already struggling in math before she missed weeks of school.

And, as it usually happens, it’s not just life without a leg that Jessica has to learn to adapt to. Her parents are also struggling with the enormous medical bills that came with the accident, the track team rallies around her but she’s not sure how she fits in with them now, since she’s no longer able to run, and she has to imagine what her future will look like now that a running scholarship is off the table.

And as her small town rallies around her to help raise money for a running leg (who even knew those existed?), she realizes that life, even if it’s one she never imagined for herself, is still pretty good.

There’s a lot going on in The Running Dream and yet, it never seemed like it was trying too hard. I completely bought Jessica’s story – her intense anger and despair, her sometimes optimism, her impatience with the whole process of getting a prosthetic leg and learning to walk again.

It’s not a high-action book, either; the story spreads over the course of more than a year and the character development really shines because of the pacing. You get to see Jessica at her best and at her worst. You see how hard the parents are trying to be positive while also dealing with the financial repercussions of the accident. And you see Jessica start to get close to Rosa, recognizing that she has seen Rosa as just a girl in a wheelchair and now desperately wants people to look beyond the disability to the regular person. Now that she’s someone with a disability, she recognizes how it feels to be on the receiving end of the stares or the people who just ignore you.

I loved too how well-researched this all was – I know more about leg amputations and fake legs than I ever would have imagined. When I start tossing around the term “BK amputee,” you’ll know it’s because of this book.

I listened to The Running Dream and several times it was while I was out running. I can’t pretend I didn’t get a little teary listening to Jessica’s adjustments to her new life as I ran effortlessly (well, huffing and puffing, but you know what I mean) on my two perfectly healthy legs.

The narration bothered me a little bit at first (the narrator has many of the sentences ending by going up which at first made me slightly crazy), but I warmed to it and by the end, I was really glad I’d listened to this one. The pacing, the characters (especially Rosa’s speech impediment), and the whole tone of the book was richer than I think it might have been if I’d simply read it in paper form.

If you are at all a fan of contemporary young adult novels, The Running Dream is one I’d highly recommend.