I have about as much artistic ability as a one-legged duck, so when I decided to make some sort of large-scale art to go on our dining room (and I use the term “dining room” in the loosest of terms), I knew it had to be something that could be done by an infant. Possibly a sleeping infant.

This project absolutely fit the bill.

I’d originally contemplated doing some variation of this from The New Domestic:

which I still love, but after I’d spent approximately a week of my life standing in the paint aisle at Michael’s, absolutely unable to decide upon colors (and after the canvas had sat on the floor of our bedroom for nearly four months), I figured this might not be the right project for me.

I felt like any color I picked was going to be either too matchy-matchy (the worst thing my parents can call any kind of house-decor) or so loud it’d be overpowering. I expended far too much mental energy on this until. . . .

Natalie pinned this photo from Live Creating Yourself and I thought “THAT is the look I’m going for.”

And two days later, it was hanging on my wall. Hooray no more canvas on my bedroom floor. 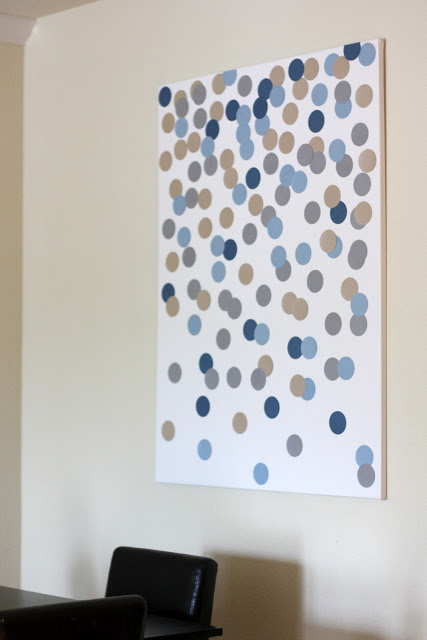 The one I copied was painted, but because I am afraid of anything that requires you to do something permanent as you go (and I was tired of buying paint and then deciding it was ALL WRONG), I decided to do paper instead.

I felt vindicated by this when I picked out four colors of paper in five minutes and spent $3 for the whole thing (and really, I could have gotten away with buying two 12×12 sheets of each of the colors instead of three because I now have an enormous stack of circles sitting on my desk. Ella thinks they are toys especially for her).

I also bought a circle hole punch (2 inches in diameter) which was fantastic because all my circles were exactly identical, with nice crisp edges. And I didn’t have carpel tunnel from cutting out a hundred circles.

My canvas was a 36×48 (I think? It’s been so long since I bought it that I can’t actually remember. But it is large) and when all my circles were cut out, I mixed them up and scattered them across the canvas, thinning them out at the bottom. Then I fussed with them a little bit to get a mix of colors and an arrangement that I was happy with (this took all of ten minutes), and then Bart and I sat on the floor and rubber cemented them on. The happy thing is that if they didn’t end up exactly where they had started, it didn’t matter! Hooray!

The next day, I sprayed the whole thing with Modge Podge spray, which I can’t tell did anything. Frankly, I’m not worried about it falling off since we glued them on very well. If I wanted to be absolutely sure they wouldn’t fall off, I would use real Modge Podge and use a roller to put it on and seal the whole thing. But, meh, then you add drying time. Who wants that? 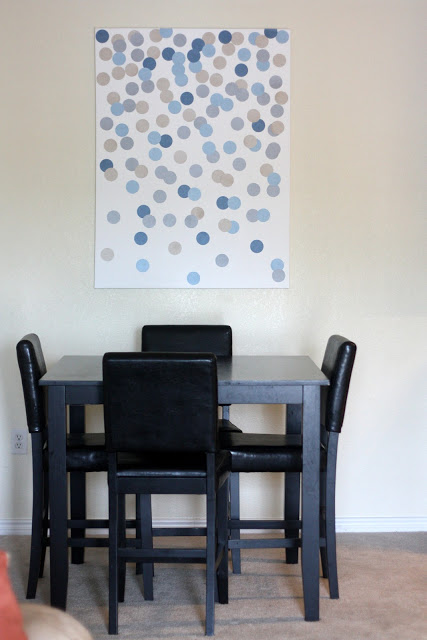 This project gets the major bonus points for being cheap ($20 for the canvas, $3 for paper, $3 for rubber cement, $6 for Modge-Podge spray, and $7 for the circle hole punch, which was the best money I’ve ever spent). 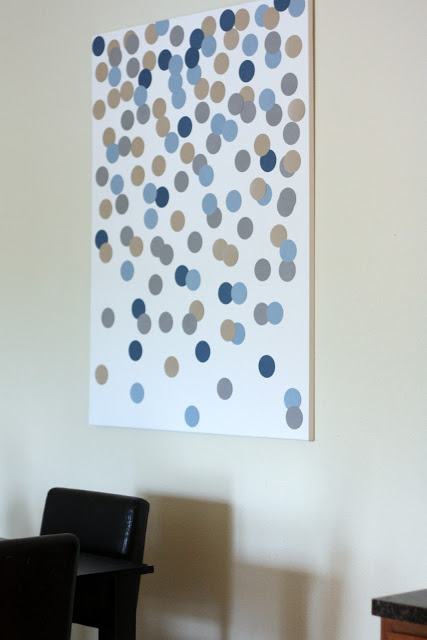 Also, Ella LOVES this thing. It’s been up for almost a week and still, every time she wakes up or we come into the house, she points at it and shrieks with excitement. Someday, if she is very very good, I might have our will list her as the beneficiary to the priceless family heirloom.