So you remember that thing about how I hate to spend a lot of money, right? So, you can imagine how much the thought of buying maternity jeans really thrilled me to my core. Especially when no stores carried my size in stock and I would have had to order them online withOUT trying them on, plus pay shipping. And pay about $40 at the very minimum for a pair. It was all very very bad.

But I can’t very well live without jeans. Even in Las Vegas, in the absolute hottest part of the summer, I wear jeans basically every day.

And then I had the brilliant idea that maybe I could make some. And Kayla said, no, that didn’t sound insane. I’d buy some super cheap jeans at Savers, chop off the top and sew one of the Bella Bands Merrick gave me to the top (hope you didn’t want that Bella Band back, Merrick), and voila! Cheap.

So, after trying on approximately 6 million pairs of jeans at Savers, I bought this pair for $5.99. And all the land rejoiced. 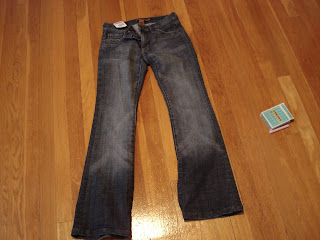 Also, these jeans had some weird sizing, so, hey, apparently I wear a size 25! Sweet.

I used some cheap-o sidewalk chalk to mark where I wanted to cut – almost to the bottom of the zipper, since I really couldn’t zip these pants up at all, and then up fairly sharply so that I could keep the pockets. On the back side, I cut just above the belt loops because I wanted the pants to fit as tightly as possible in the bum (begone saggy bums!) and I was worried if I cut too low, they’d slide right off.

Then I slid the Bella Band around the top of the pants, with right sides together, and zig-zagged around the whole thing (I didn’t even bother to pin because I am exceptionally lazy and also because I don’t actually seem to own any straight pins). The pockets were the trickiest part just because I had to get all the layers to lay flat, but when I say “trickiest” I mean “the only part that I could not have done in my sleep.”

The worst part was at the end when I was going over a few places and KNOWING this was going to happen, I went right over the rivet on the pocket and broke off the tip of my needle. So, that was the end of that. Good thing it was all done anyway. 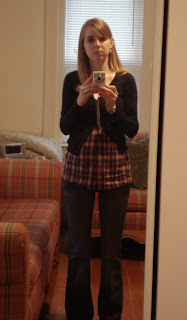 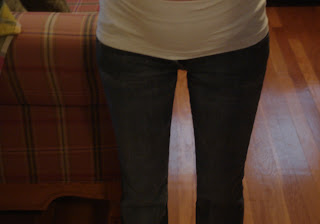 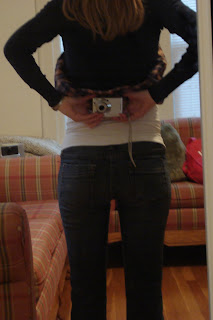 And I was happy to have spent $6 (plus the cost of replacing my needle) instead of $40 or $60. I am ludicrously proud of myself. You’d think it took me hours instead of ten minutes.