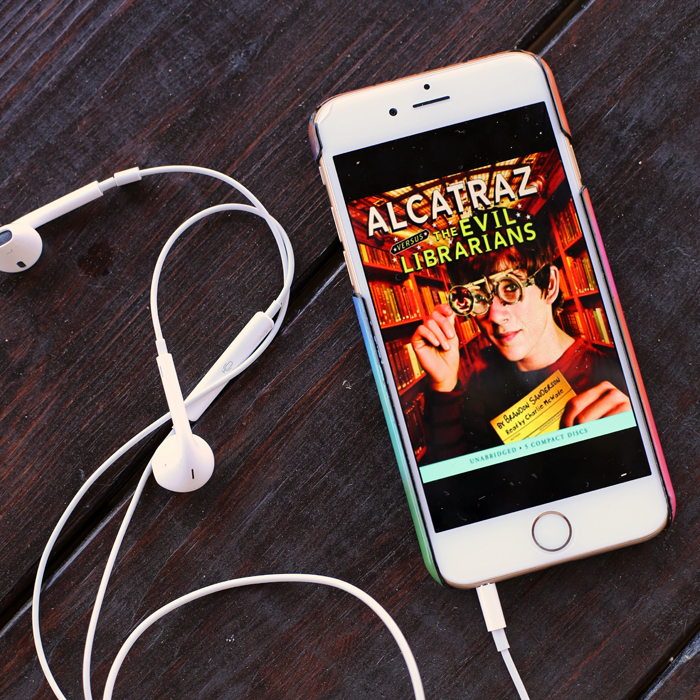 One of the things I love about Tell Me What to Read is it helps me finally get around to reading books I’ve meant to read for, oh, eight years or so.

Alcatraz vs. the Evil Librarians is one of those books I’ve been meaning to read all this time.

See, here’s the thing about a book where the villains are librarians ruling the world. If you’re a librarian, everyone will tell you that you must read this book. (Now I’m wondering if everyone tells my dad that he must see Little Shop of Horrors, what with the evil dentist and all).

Also, Brandon Sanderson is one of Bart’s very favorite authors and he keeps telling me to read something by him. Of course, I happened to choose one of the few Sanderson books Bart hasn’t read, but let’s ignore that for the time being.

The thing about Brandon Sanderson is that most of his books are fantasy and that is not really my genre of choice, especially serious, map-including, multiple kingdoms, curse/prophecy sorts of books.

Happily, Alcatraz vs. the Evil Librarians is definitely more of a fantasy-lite kind of book.

alcatraz vs. the evil librarians by brandon sanderson

Alcatraz has lived fairly unhappily as a foster child for his entire life, shuffling from family to family. It’s not that he’s so much of a bad kid, it’s that he has an unfortunate habit of breaking, smashing, and basically destroying everything around him. One family after another asks him to leave after a garage, a kitchen, every door handle in the house, etc goes up in flames, disintegrates into a pile of rubble or otherwise becomes completely unusable.

But then, on his thirteenth birthday, everything Alcatraz has ever known gets turned upside down, when his grandfather (who he didn’t know existed) shows up and tells him that the the world as he knows it is actually all a farce, controlled by evil librarians.

And also, that bag of sand that appeared out of nowhere for his birthday? Apparently is really important and has some magical powers. Too bad the evil librarians already stole it.

And so Alcatraz, his grandfather, and a few other sidekicks are off on a quest to the downtown library to steal it back from the librarians.

Alcatraz vs the Evil Librarians is not a terribly long book and the plot moves along quite quickly. It has the same sense of humor that the Lemony Snicket series does, although I thought this was better. I finished the last hour of it at the grocery store this week (I went in the evening without children and it was sort of like a vacation) and I tried hard not to laugh out loud at several parts so as not to attract strange looks in the produce section.

I loved how various librarian tricks are revealed throughout the book, like the fact that there are other continents that don’t appear on our maps and that dinosaurs aren’t extinct (and they all speak with British accents). It’s just a fun reimagining of the world plus a quick-paced story. I would definitely have recommended this to many kids when I was a librarian.

There are four books in the series right now, with a fifth and final book coming out next June. And if there’s anything better than a good middle-grade book, it’s one with several books to read after you finish the first one.

Now onto the final book of this round of Tell Me What to Read – A Girl from Yamhill (and yes, I’m reading them out of order because I’m just that kind of book-reading rebel). My plans for this holiday break are to basically read books non-stop.

If you liked this review of alcatraz vs the evil librarians, you might also like these books: