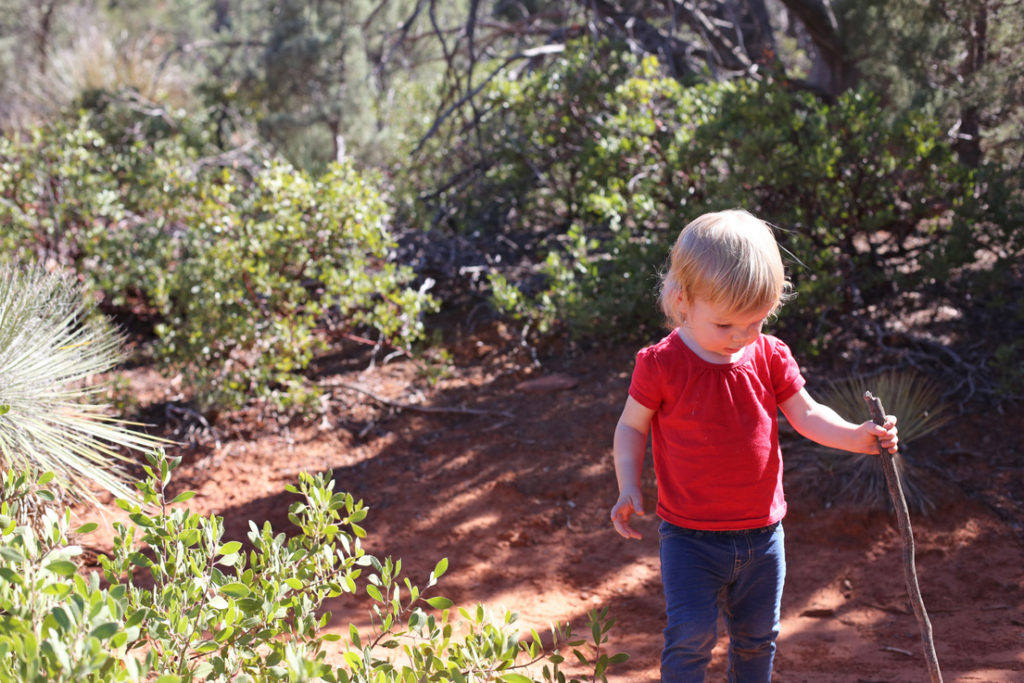 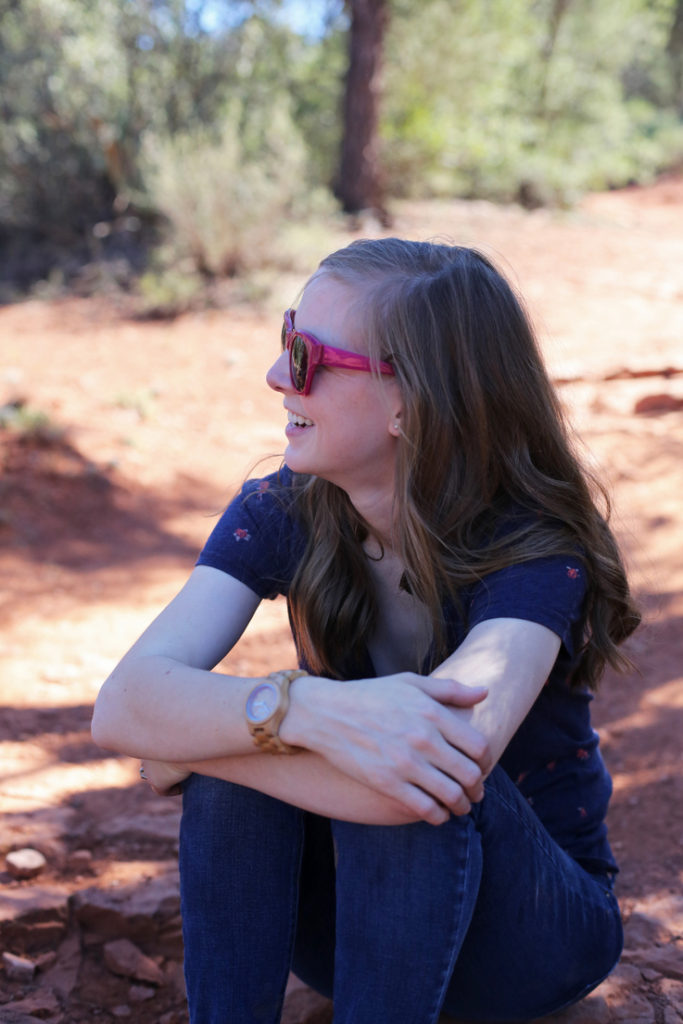 Last year for my birthday, we took a little weekend trip to a dude ranch in Tucson.

Despite the fact we were only gone about 24 hours, it was such a perfect little getaway to spend time as a family and get away from the regular routine at home.

This year, I wanted to do something similar, and since our trip to Sedona in January, I’ve been dying to go back with the girls.

Earlier this summer, the Orchards Inn invited us to come stay and so we scheduled it for the weekend of my birthday and I’ve been looking forward to this trip for weeks. 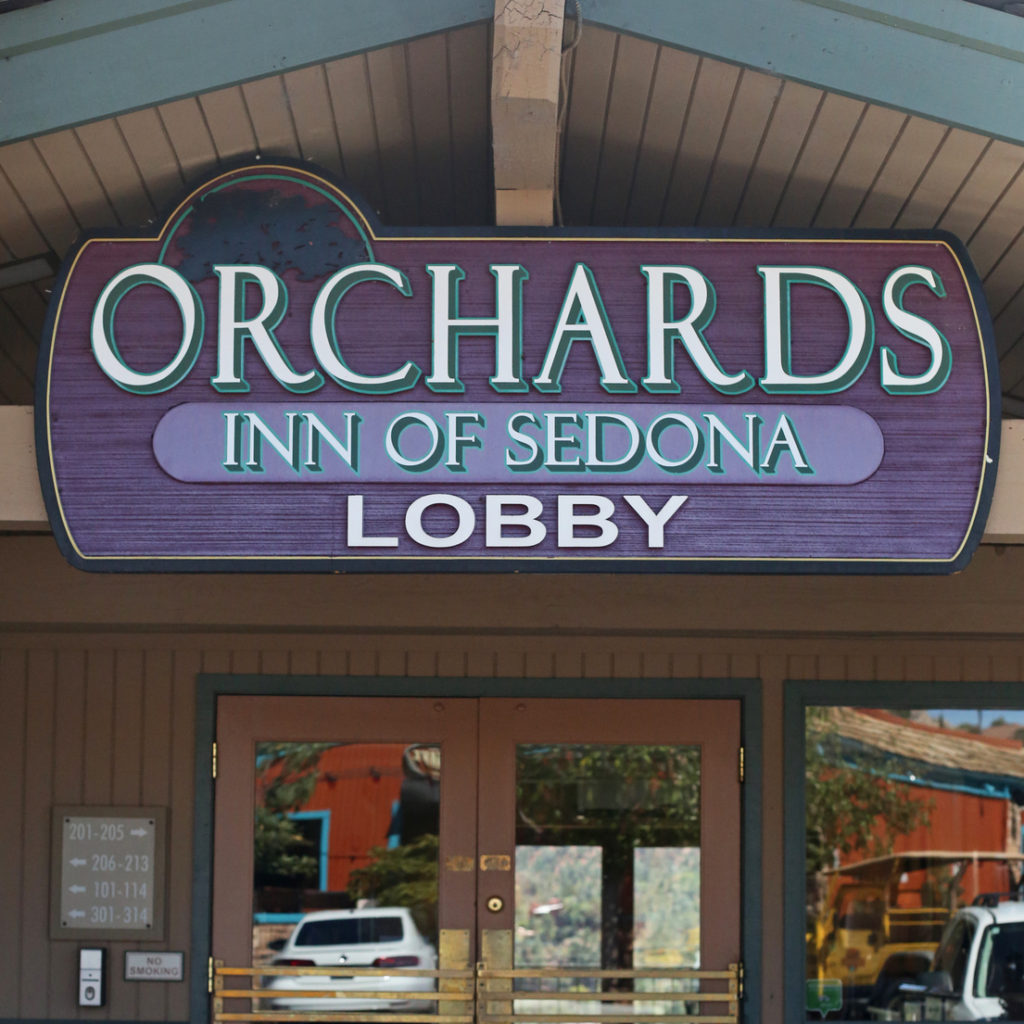 Bart finished up work on Friday afternoon a little early and we tossed all our stuff in the car and headed out. We didn’t take a stroller on this particular trip and we didn’t even need a crib, since the Orchards Inn told us they’d have one ready for us, so it felt like we took almost nothing along.

The drive took just over two hours and we arrived in time to eat dinner at Hideaway House. It’s this cool kind of tree-house restaurant with multiple levels mostly outdoors looking out over the cliffs. It was totally dark by the time we sat down, but a gorgeous full moon was rising over the mountains and it was spectacular.

The girls wanted pizza, but the waitress warned us that the pizza took about 25 minutes to cook, and suggested the cheese bread appetizer instead, which arrived within about ten minutes and was delicious. The girls ate every bite. Bart got some salmon (which all the girls helped him with) and I got an excellent Italian grinder sandwich.

There was a pretty spooky Halloween guy in the lobby (pretend, but with a fairly realistic face that moved around) and Star was kind of petrified of him. All the way back to the car, she kept saying, “Guy. Guy. Bye, Guy. No, Guy.”

The Orchards Inn was just around the corner, so we drove up, checked in, and found our room which was enormous with two queens and a fold-out couch, plus a crib set up for Star. They also had a little box of chocolates and a nice birthday note for me, which was a fun surprise, especially for the girls, who were disappointed we hadn’t ordered dessert at dinner.

By this time, it was nearly nine p.m., so we put everyone in jammies, tucked the two big girls into the fold-out bed, settled Star in her crib, and then Bart and I got in bed with our laptop and book respectively. I was so tired I fell asleep within about ten minutes, and slept like a rock (as did everyone else – I need to get those heavy hotel blackout curtains for every room in our house).

The Orchards Inn serves a pretty comprehensive complimentary breakfast at the restaurant that shares their parking lot, so we all got ready and headed over for yogurt and granola, cold cereal, toast, eggs, and juice. They also had these SunGold kiwis, which I’d never had, but were so amazing that we ate four of them.

Last time, we’d stayed farther south, so it was fun to be right in the middle of things this time, with plenty of shops and restaurants within walking distance.

On the way in the night before, we’d passed a sign for a farmers market, and Ella has been begging to go to a farmer’s market, so this seemed like the day to make that happen. We drove down (it was quite a bit longer of a drive than I’d remembered) and wandered around. It was fairly small and not terribly impressive, but the weather was nice and there was live music and a real goat, so everyone was happy. 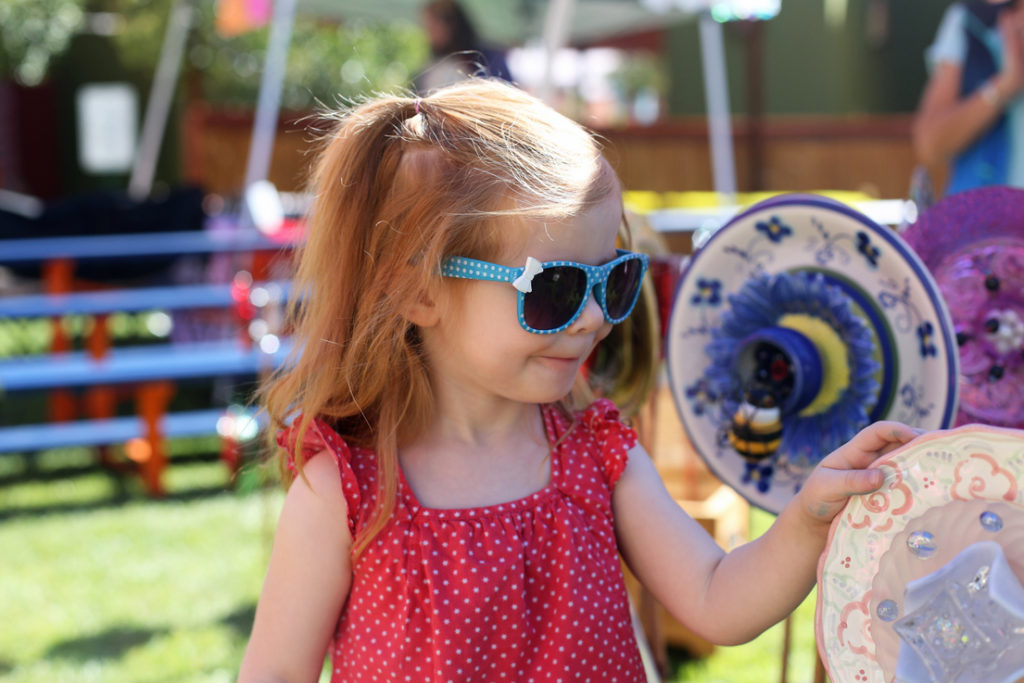 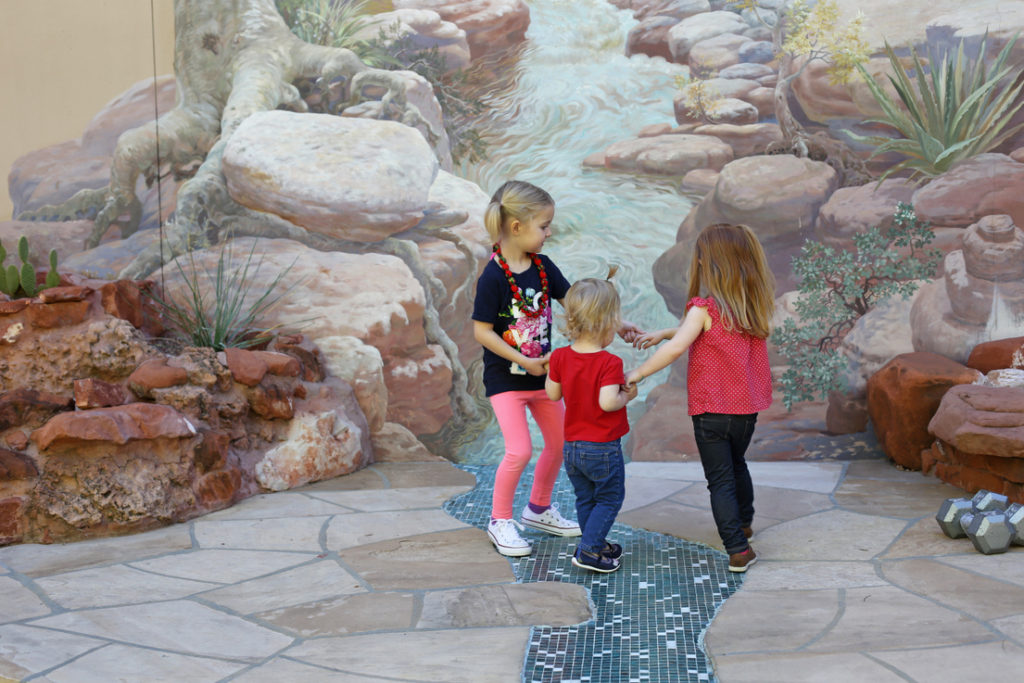 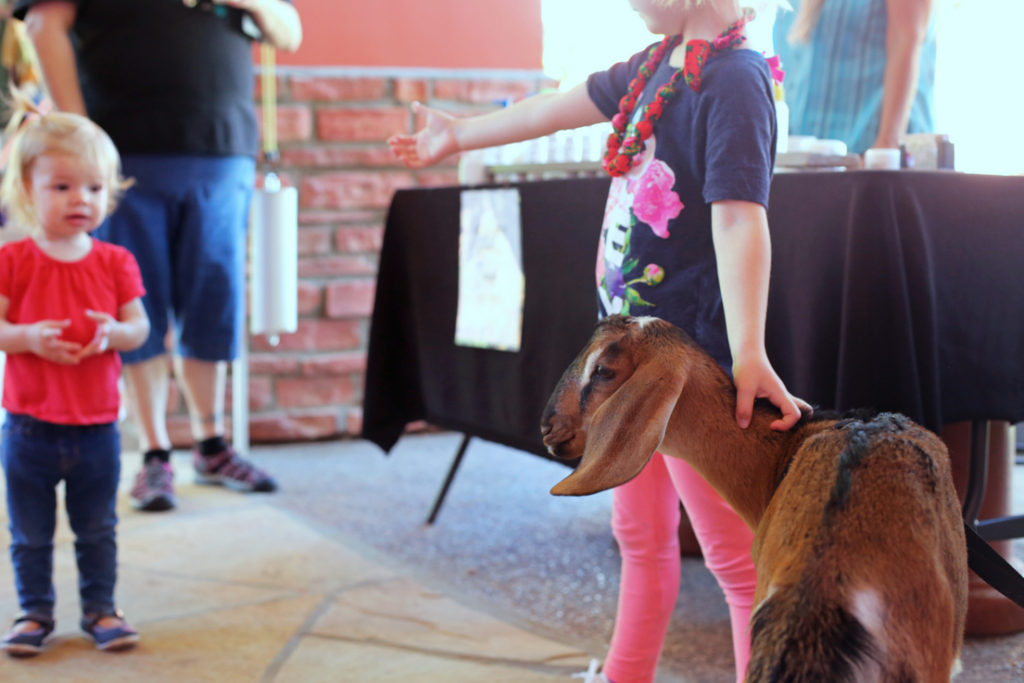 We headed back to the hotel where Bart and Star took naps while the big girls and I headed to the Sedona library. I’d been there on our last trip and knew the girls would love it, and I wasn’t wrong. They were totally infatuated with the dress-up section, and Ella made me a whole slew of mail, including checks, letters from my parents, and joke postcards. 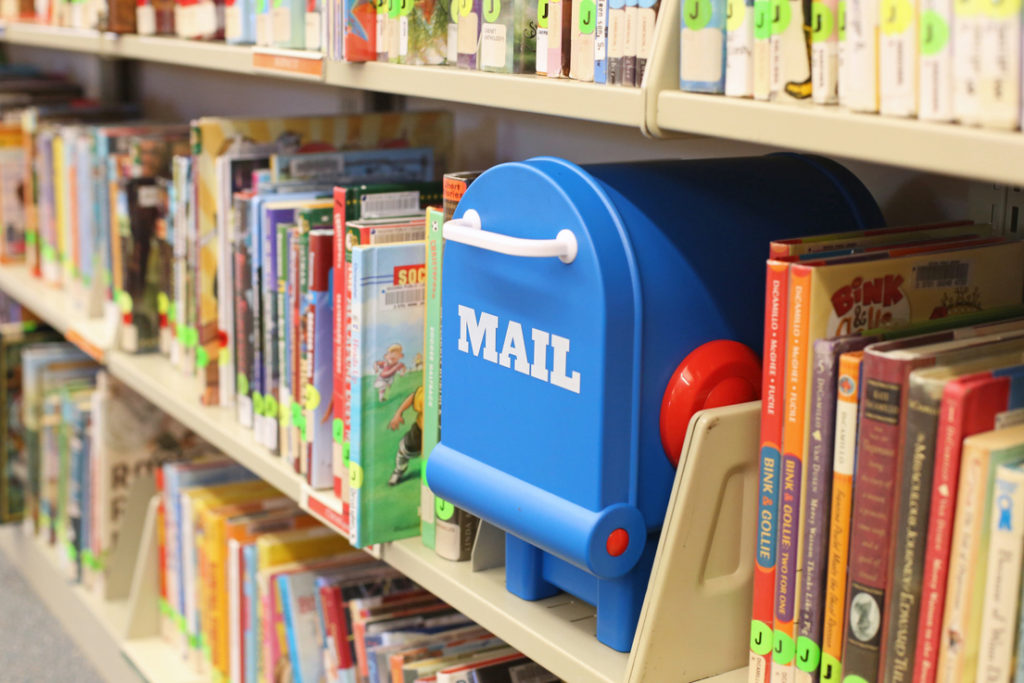 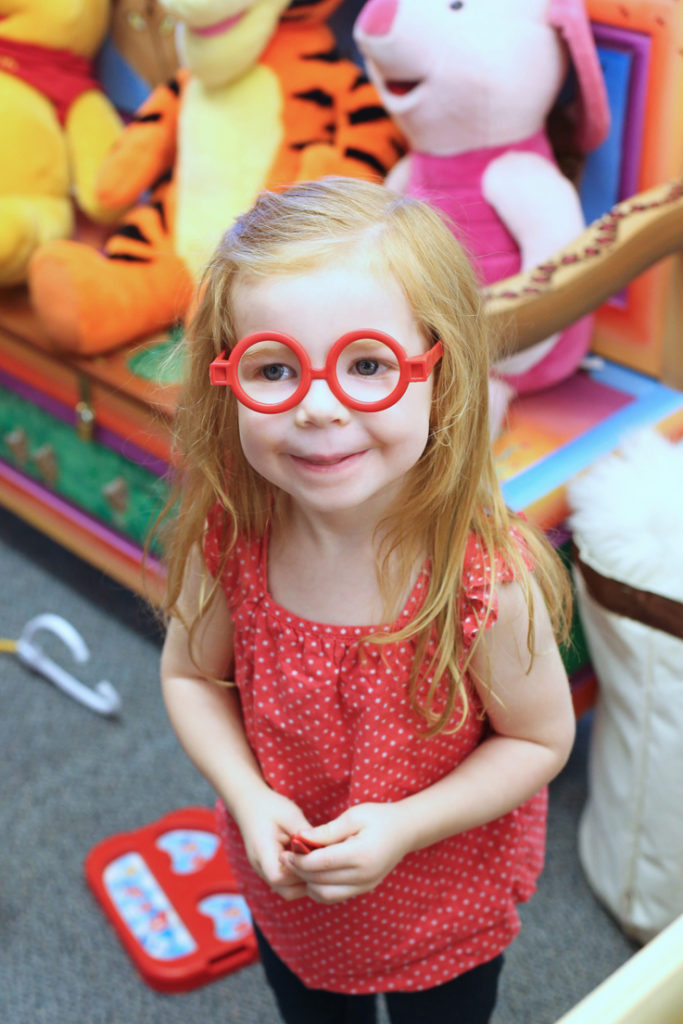 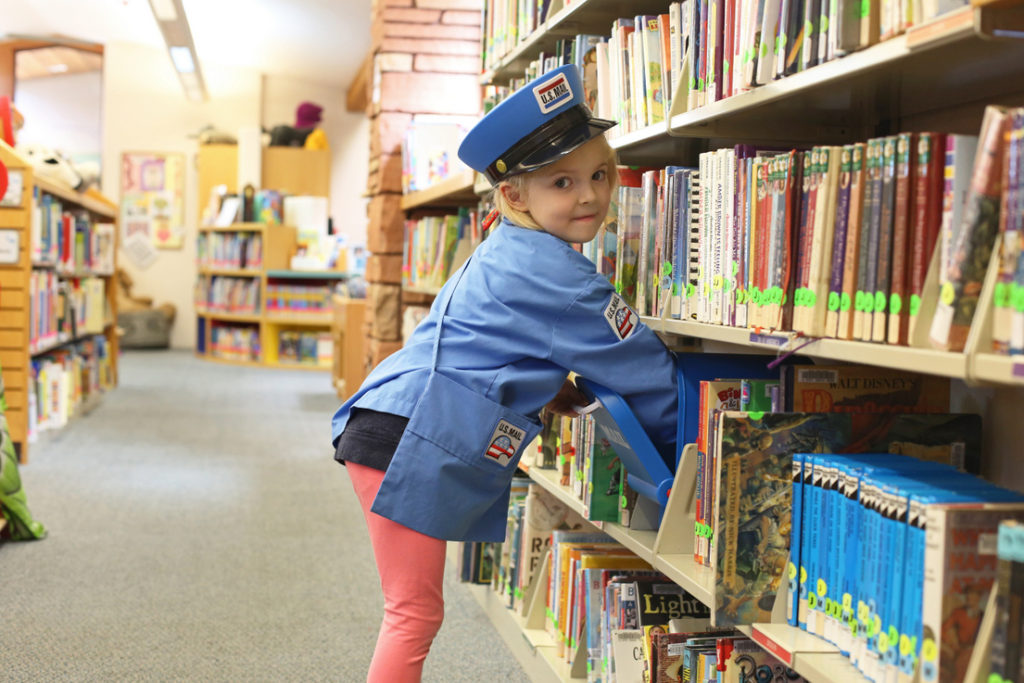 Eventually, we headed back, helped Bart pack up our stuff, and then we headed out to lunch. The best meal of our trip last time was at Indian Gardens Cafe and Market, so I was anxious to return for another bacon and brie sandwich. Last time, we’d eaten inside because it was a little chilly in the shade, but this time it was perfect, and we snagged a table and it was just the perfect spot for lunch. The food was amazing, being outdoors meant it didn’t matter when we had two different water spills, and the girls loved wandering around looking at the fountains while we waited for our meal. I could have sat there all day. 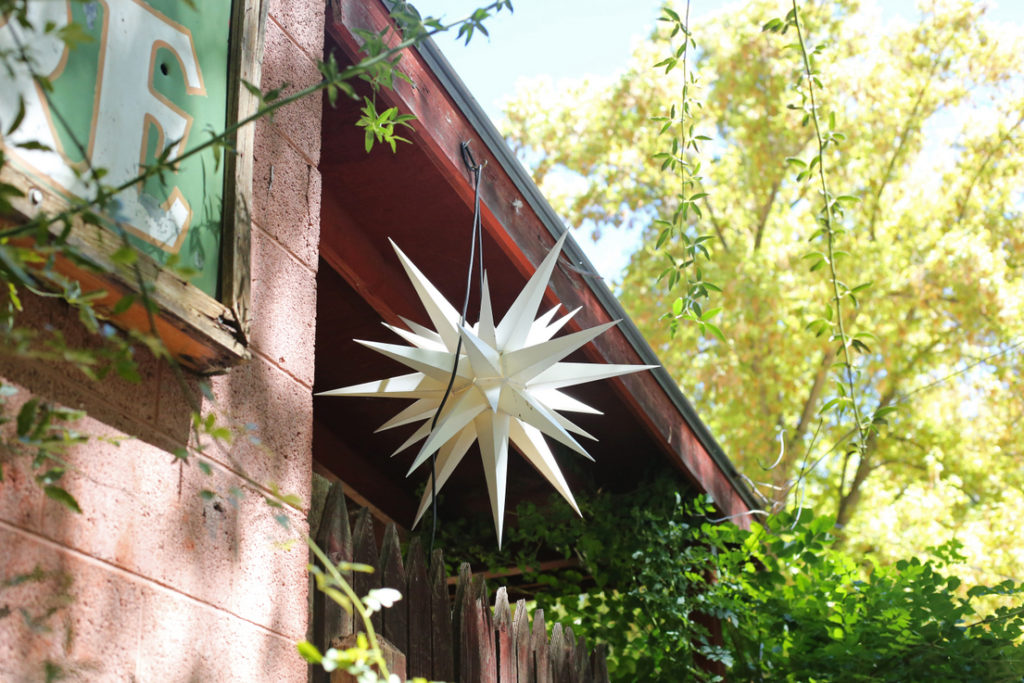 Ani said, “Sedona is SO much nicer than Arizona.”

As we were leaving, Bart was herding the girls and I was standing alone near the entrance and a woman from the table next to us came up to me and said, “Are those three girls yours?” When I told her that, yes, they were, she said, “We kept trying to decide if you were the mom or the oldest daughter!” I guess I’m aging slower than I thought!

We’d intended to hike West Fork which was near the cafe, since it crossed a little river several times and that seemed like something the girls would love, but when we arrived, the parking lot was completely full and it was a two hour wait for a parking spot. So . . . that was a no.

We passed several other hiking spots on the way back but they were also completely full. The girls were getting restless, but Bart and I really didn’t want to leave without a hike, so I looked up a few places on my phone and found Broken Arrow trail which had great reviews, but very few of them (a good sign that it wasn’t as popular) and looked easy enough for the girls.

It also turned out to have free parking, so that was an extra bonus.

Even though it was only about 85 degrees, the sun was bright and hot, and I was glad I’d packed the sunscreen. 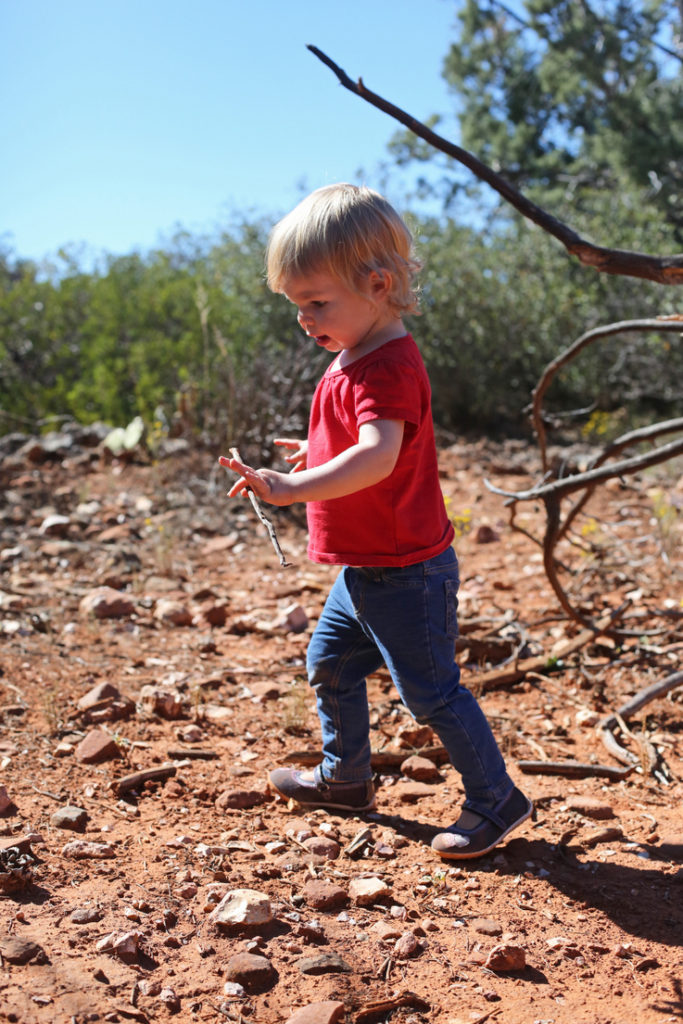 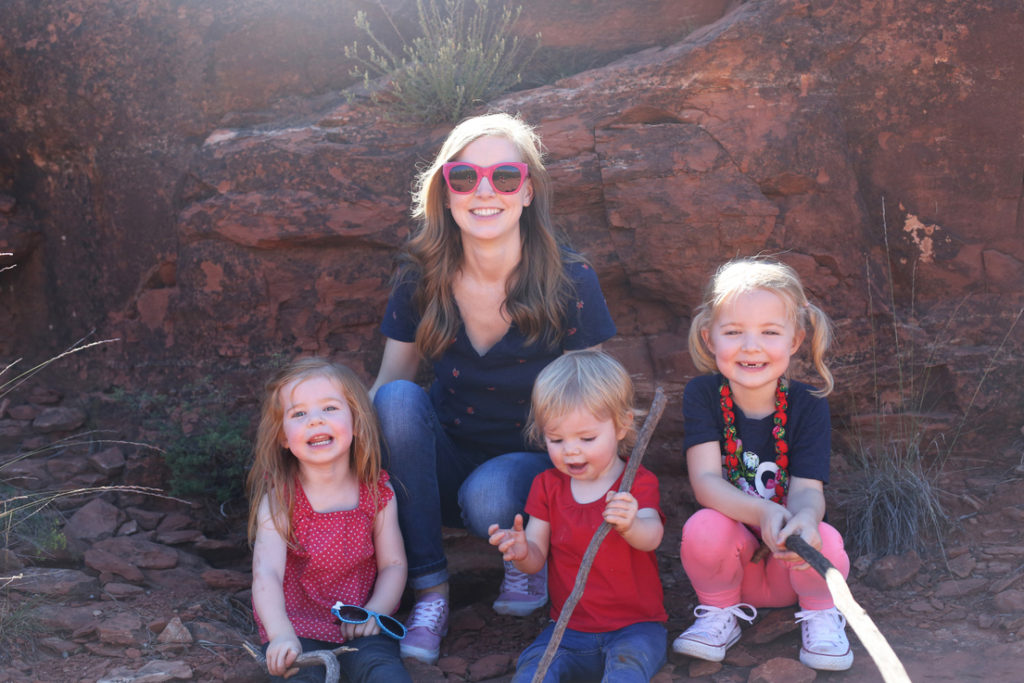 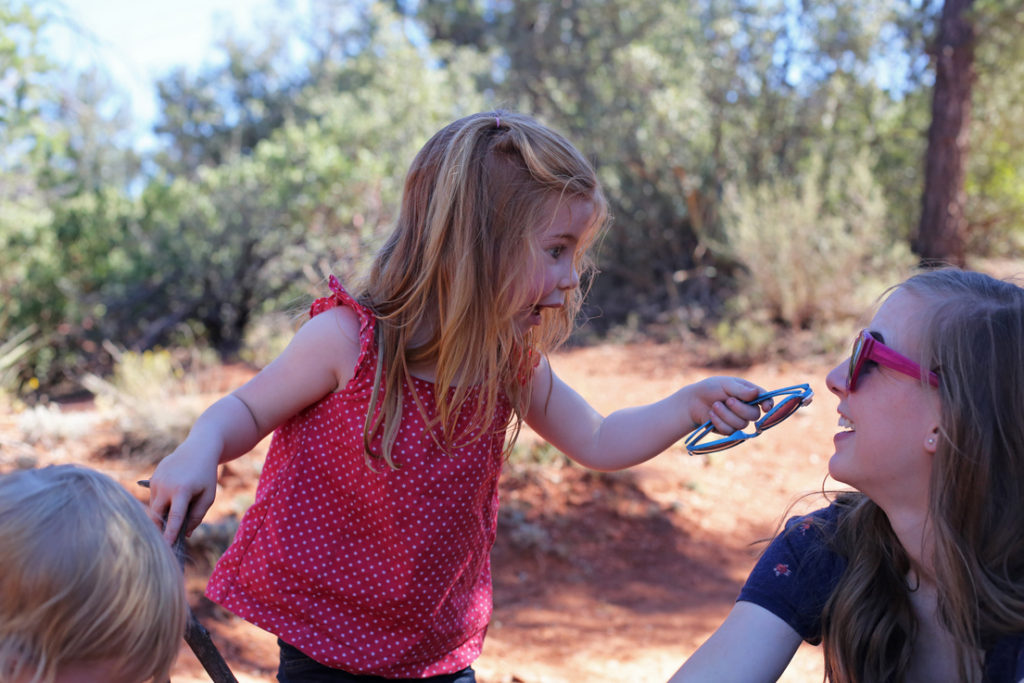 We spent just under an hour on the trail, and the girls LOVED every second of it, using the hiking sticks Bart found for them, scrambling over rocks, and cautiously petting a dog. I’m hoping that we can get out and do more hikes this fall while the weather is beautiful. 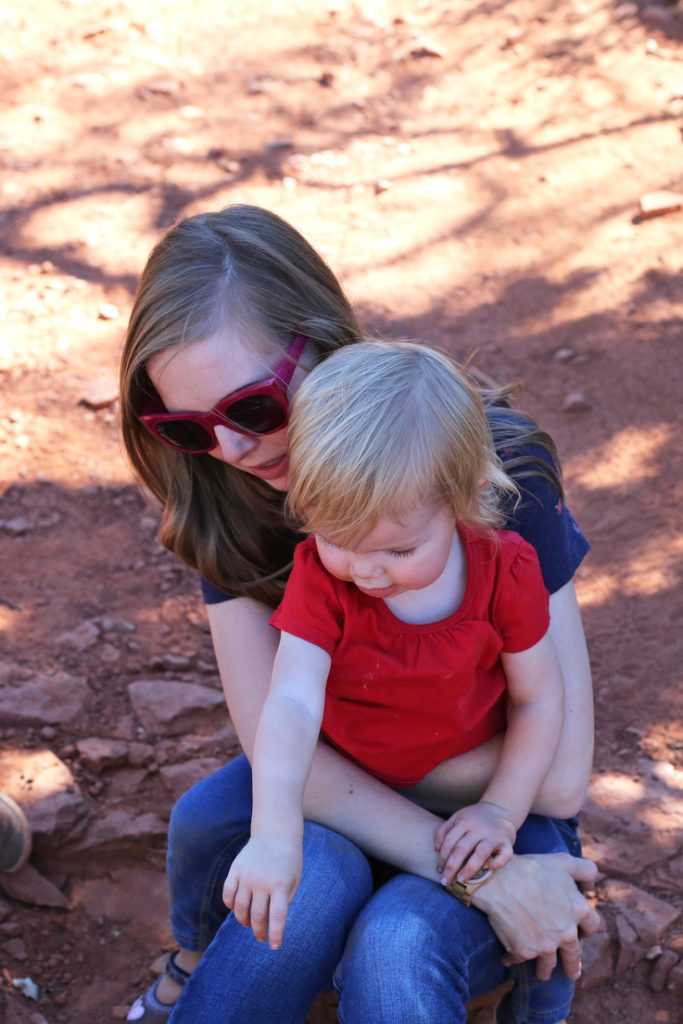 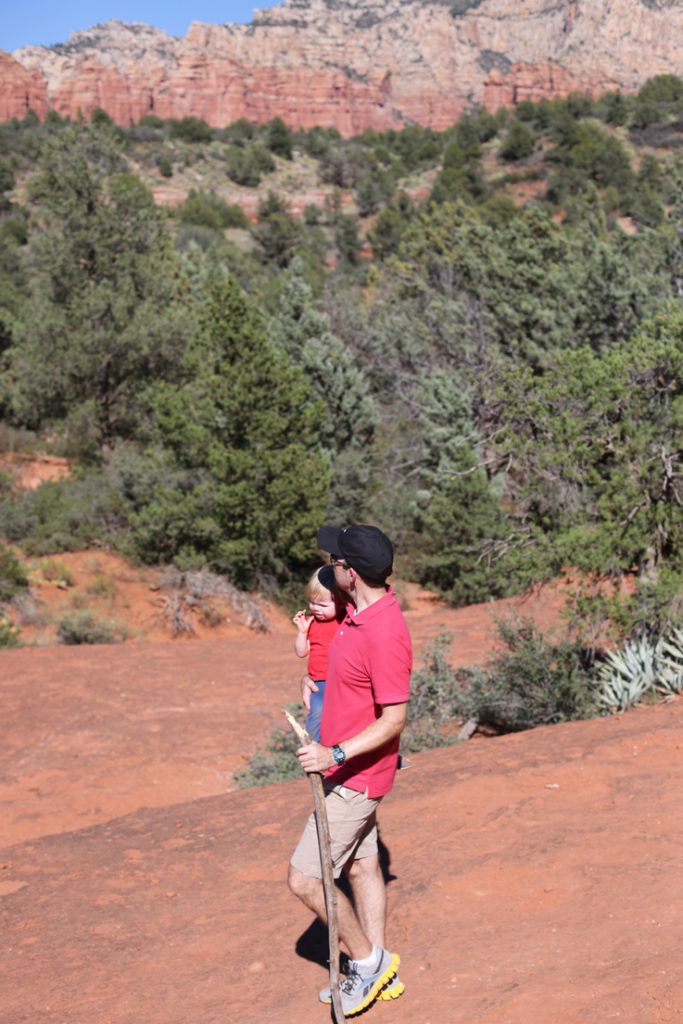 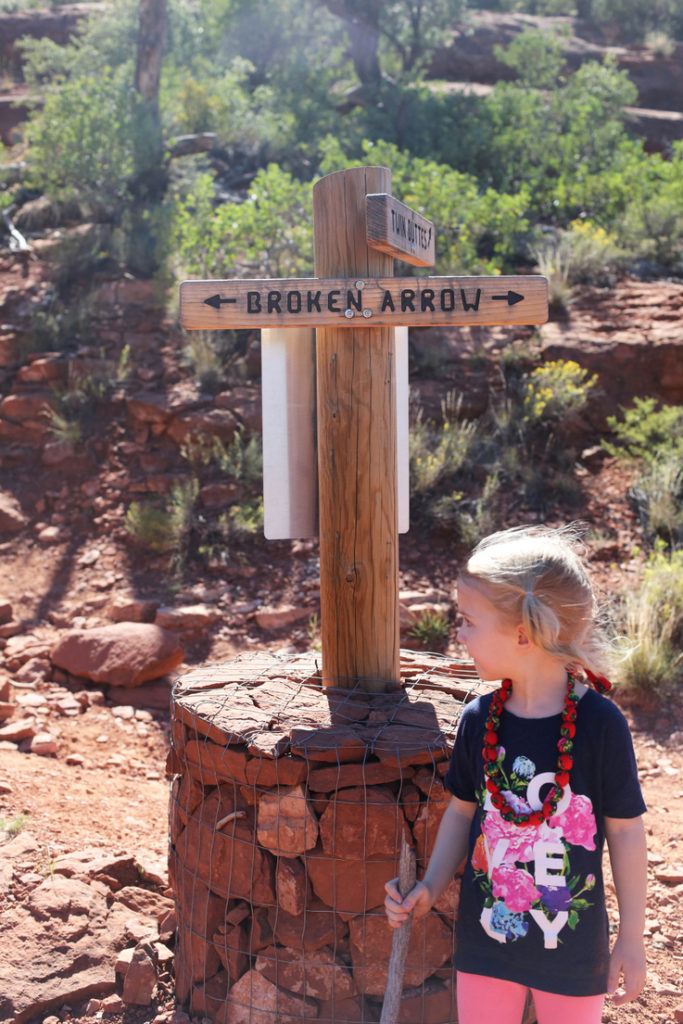 When we got back to the car, everyone was tired and warm enough to enjoy being back in the air-conditioned car and we headed straight back to Phoenix.

Bart and I both wanted to hit Berry Divine again, but no one was quite hungry yet after our huge lunch, so we looked it up and discovered that there was one in Scottsdale on our way home, which ended up being a nice break for dinner and bathrooms before the last push home.

It was a perfect stopping point, and our acai bowls were as delicious as we’d remembered. Then home, baths for all the dusty, sticky babies, and everyone tucked in their own beds.

I love this new little tradition of a weekend trip for my birthday. Now to figure out where to go next year. . . 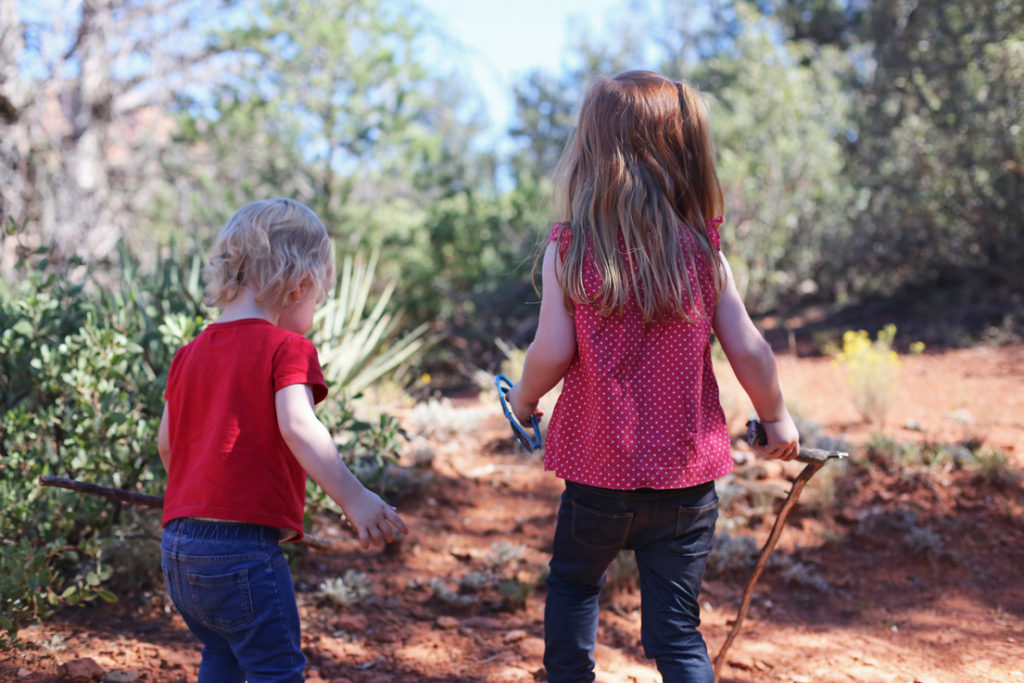