I know that Valentine’s Day is still a long way off, but since the calendar has now rolled over to January and people are starting to take down their Christmas decorations, I wanted to show you one of my favorite projects of all time that solves that age-old problem: what to do with old Christmas cards.

Any time I share this in February, I get a whole slew of messages from people saying things like, “Oh, I wish I hadn’t already recycled all my old Christmas cards!”

So tuck this idea in your back pocket, stash your Christmas cards away for a few more weeks and when February rolls around, you’ll have the perfect project for a chilly day all ready to go. 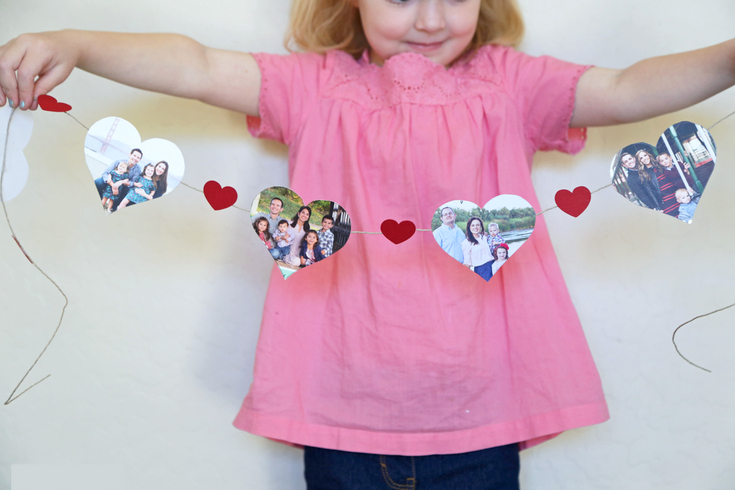 I can’t imagine that I’m alone in my Christmas card angst.

It pains me to toss pictures of people I love (pictures they’ve spent money to send to me) in the recycling bin trash can.

But, I also am not really interested in keeping stacks of dusty cards for years. My clutter-phobic self can’t quite allow it.

About seven years ago, though, I stumbled on a solution that has brought me a tremendous amount of satisfaction.

I put the cards on top of the fridge after Christmas, where I couldn’t see them and they weren’t in the way.

And then one long afternoon in early February when Ella and I were home alone, we made a Valentine banner with those old Christmas cards. 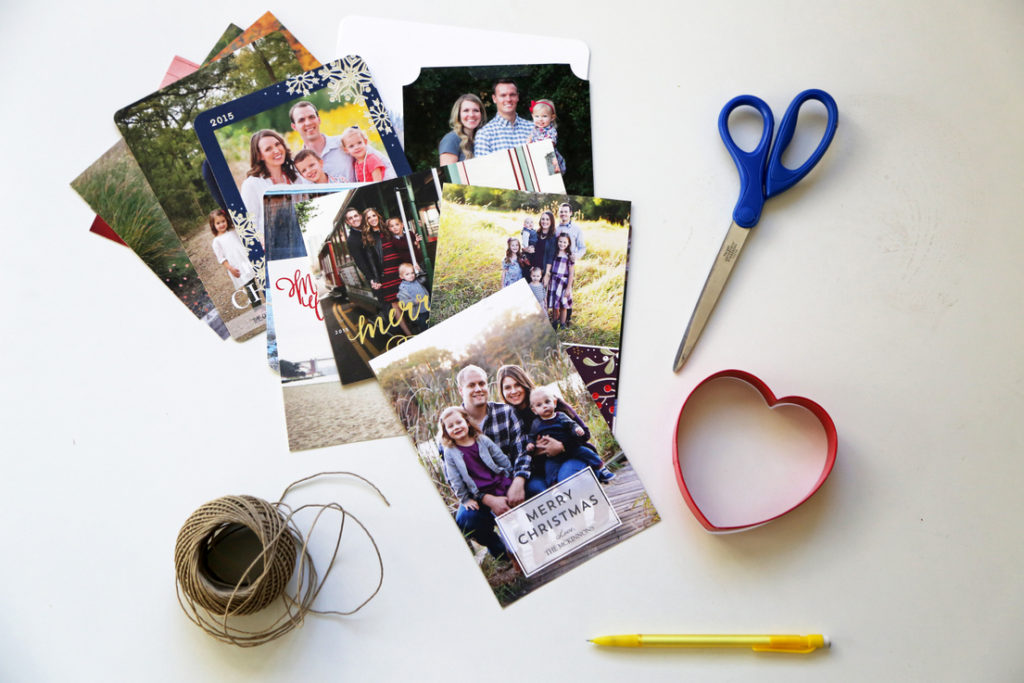 I love this project because it spotlights many friends and family that I love, it uses up materials I already had, most of which were already full of cheerful patterns and on nice paper, and it makes our house feel festive and happy. 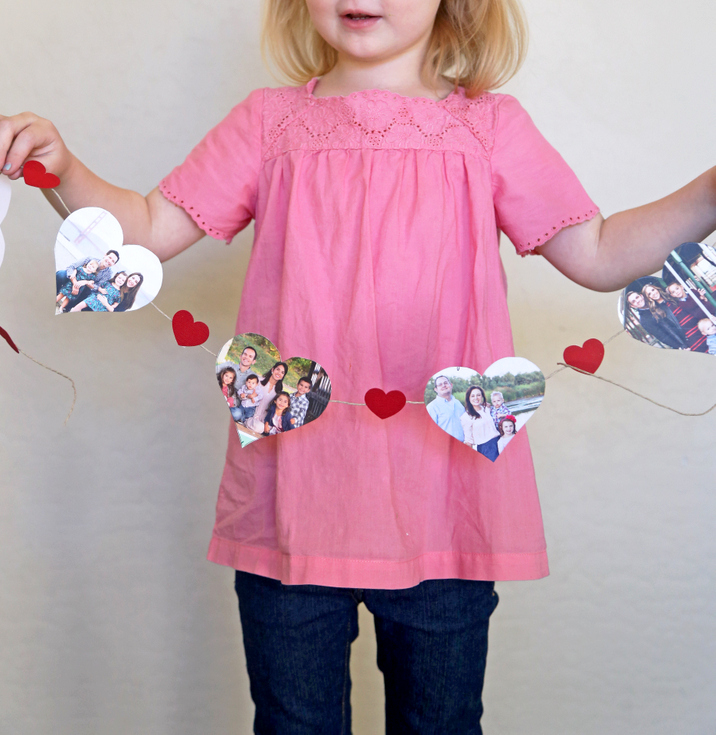 To make your own Valentine Banner, you’ll need:

How to make your your Valentine banner

This was an easy little project. I printed out a heart template (because the colors and designs of the cards were so varied, I chose to go with a single pattern. But I think it’d look fun too with multiple heart shapes). I traced the heart onto the cards, and then cut them out.

I used a couple of wedding announcements in addition to the Christmas cards and on some cards I cut out two hearts if space allowed, which resulted in a total of 40 hearts. In some cases, I just had to let some people’s heads get cut off because of the placement on the card. I hope my nephew forgives me for only including part of his lower right cheek in his family’s card. 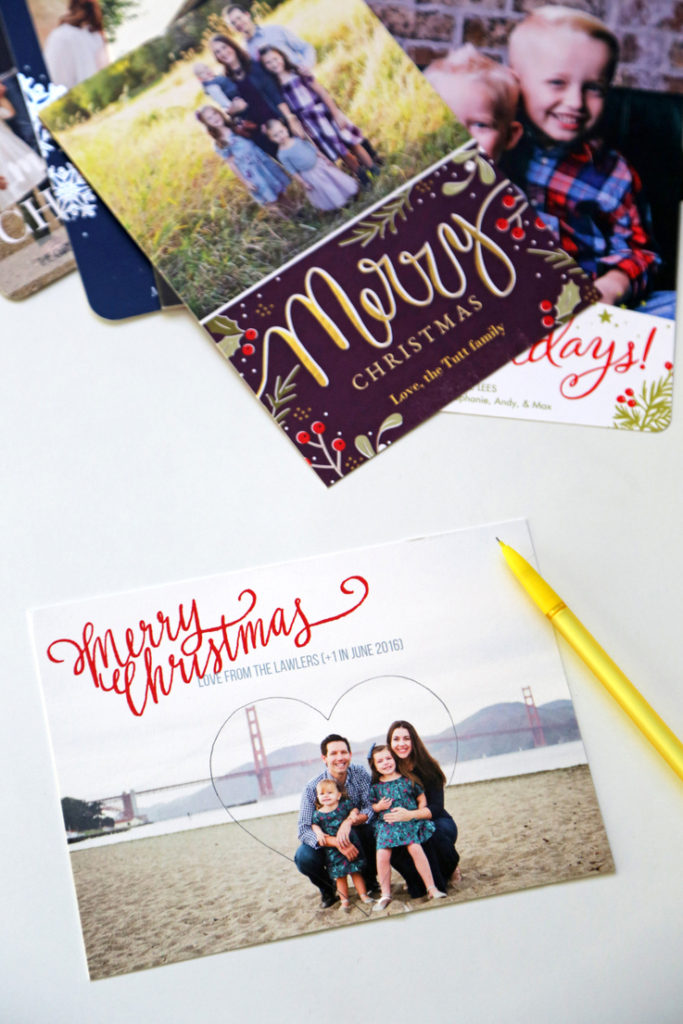 After they were all cut out, I laid them out in a single row so that I was happy with the arrangement of colors and designs (I wasn’t very picky, but I didn’t want it to be ten non-photos in a row at one end) and then alternating with small red paper hearts between the photos.

Then I taped twine to the back of each heart. I did the twine about 3/4 of the way up and also taped them horizontally so that they wouldn’t spin on the twine too much (I originally did it vertically and they were spinning all over the place).  Also, I left about 6 inches of extra twine on each end.

And then I wrapped the twine around some tacks, and tacked both strands on the wall. I used a little bit of photo tack under about six photos to keep it laying flat against the wall. I trimmed off the extra twine so it wasn’t distracting and voila!

Virtually free holiday decoration! And then, after Valentine’s, I think I’ll have no problem tossing the whole thing in the trash. 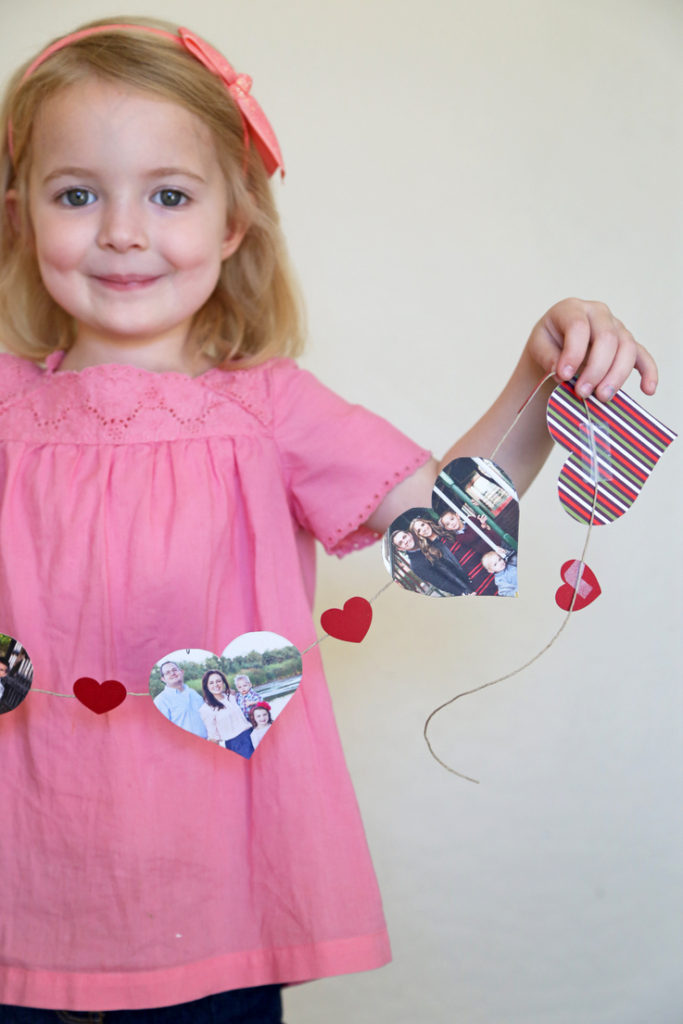 If you liked this post about how to make an Valentine banner and solve the problem of what to do with old Christmas cards, you might like these posts too: