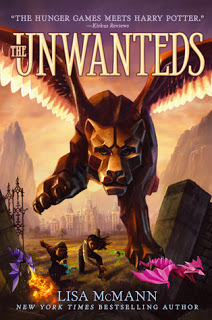 You know what is wildly disconcerting to me? (Many things, but let us not dwell on that at this moment). When I read a book and then when I go to get a cover image, I discover that the cover is completely different than the advance copy’s. It’s like I know nothing about the book I just read!

I heard The Unwanteds pitched at BEA last year (so yes, I’ve waited absolute ages to crack open the advance copy I picked up there) and that pitch alone has made me never forget this book.

Lisa McMann’s kids attended a school where the art and music programs were cut for funding reasons and she felt like the creative kids were getting punished. So she asked her twelve-year-old son what he thought about a book where children were sorted by abilities. The strong and smart kids were Wanteds and the creative-type kids were Unwanteds and punished for being so.

Her son replied, “What if instead of being punished, they were sent to their deaths?”

And that’s The Unwanteds.

the unwanteds by lisa mcmann

The book starts on the day of the sorting and Alex knows he’ll be an Unwanted. He’s already been reported for a number of infractions, including scratching images in the dirt with a stick, so it’s no surprise to him when he’s named as one who will be sent to die in the Lake of Boiling Oil.

But it’s still terrifying to be going to his death and heartbreaking to leave behind his twin brother, Aaron, who is selected as a Wanted (there are also “Necessaries” who fall somewhere between the two).

When Alex and the other Unwanteds arrive at the Death Farm, though, they discover that the Death Farmer is actually a magician who has created an invisible world for the Unwanteds to live in. Hundreds of them, purged by the city of Quill over the years, reside there, developing their artistic gifts in music, art, writing, theater, etc, and learning to wield magic as well.

And it’s not just magic for magic’s sake – everyone knows that there is a possibility that someday a battle between Quill and the invisible world of Artime will erupt and if it does, the Unwanteds must be ready to defend themselves and their way of life.

Fantasy is not, as I’ve mentioned before, my genre of choice. I don’t hate it, but I’m not intensely drawn to it. This one had just the right mix for me – plenty of delightful and fun details about the magical world (I loved the talking chalkboards in every room and the idea of art as a weapon), but not so much that I thought, “The story! Could we move on from your cool little world and tell a STORY?!”

The action starts up on the first page and doesn’t end until the very last page – the pacing is great, the main characters are full of their own personalities, angst, and goals, and its fun to see the world from the views of several of the Unwanteds, each of whom has a different reaction to a life they never could have imagined.

You also get to see Aaron’s life in the Quill University, and his own reaction to the “death” of his brother. I loved seeing what he was up to and seeing the contrast between the two worlds.

In a little note at the beginning of the review copy, McMann talks about how she’s always loved the middle-grade fantasy of Roald Dahl and C. S. Lewis, and The Unwanteds very much has the same flavors as those authors. It has the same kinds of quirky characters and magic that makes me think of Dahl and the grand battles and flawed humans I associate with Lewis.

You will not be surprised to hear that there is a second book to this series coming out in the Fall and then another installment in 2013, but The Unwanteds could absolutely be a standalone book. And for that I am deeply grateful.

Advance copy picked up at BEA