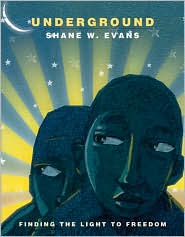 Sometimes (might I even say most of the time) you get a non-fiction picture book because you want to learn some quick facts about some topic.

But sometimes, a picture book gives you instead a sweeping overview of the feelings and emotions surrounding a historical event.

Underground by Shane W Evans is one of the latter. It deals with the Underground Railroad (as you might have guessed from the title if you are very smart person) and instead of talking about slavery, Harriet Tubman, way stations or any of the other things you generally find in a book on this topic, it describes in the sparsest of words (less than 100 words in the whole book) the actions of slaves as they escape.

underground finding the light to freedom by shane w evans

“The darkness,” it begins.

On the next page: “The escape.”

Later, on three separate full page spreads, “We run. We crawl. We rest.”

The illustrations, though, are what make Underground shine. They are dark, with the houses barely distinguishable from the night sky. They’re done with quick dark lines and rough pencil shading. In some images, you can hardly make out the escaping slaves in the darkness. The sprinkling of stars in many of the pictures, the frightening light of a slave catcher’s torch, or the soft glow of a lantern on a way station porch is often the only bright spot in the entire page.

And then, as the slaves approach their destination and their dream of freedom, the sun begins to rise, lighting first only the barest edge of the horizon and eventually soaking the entire page (and the people) in brilliant light. It is such a smooth transition, you almost don’t see it coming.

Would you want this book to be a child’s only introduction to the Underground Railroad? Of course not. But Shane W Evans does a beautiful job and adds moving compliment to any discussion of it.


If you liked this review of UNDERGROUND: FINDING THE LIGHT TO FREEDOM, you might also like these books:

Previous Post: « The Watcher: Jane Goodall’s Life with the Chimps by Jeanette Winter
Next Post: A Perfect Day »