A few weeks ago, Saturday evening rolled around. Bart and I were both glued to various computers and we’d spent most of the day inside. I had ventured out to the grocery store and the gym, but other than that, our entire day had been spent inside, in our tiny living room.
“This is just sad,” Bart said. “We live in Boston – people pay tons of money to come here on vacation, and we’re sitting here piddling our weekends away.”
And so, we’ve decided we’re going to be more proactive about making Saturdays fun, a time to get out and see our city and the surrounding areas. Of course, the very next Saturday, I was in Las Vegas and then on an airplane for hours and hours, not arriving home until late in the evening, so that weekend was kind of shot.
But yesterday! We would not be stopped. Not by the snow or the rain (in fact, even though it was 31 degrees and there were little snow flurries, Bart and I went for a nearly five mile walk through our neighborhood in the morning. It was delightful).
We picked up our museum passes from the public library (this is one of the things I love about Boston – you can check out free or discounted museum/zoo/historical site tickets at most of the libraries in the area) and headed up to the John F. Kennedy Presidential Library and Museum. 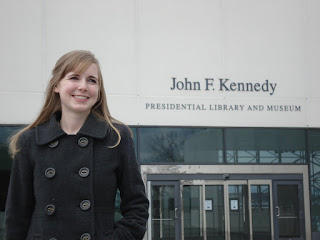 People, you know you have lived in Boston for a while when you are unreasonably thrilled by free, open, abundant parking. It was perhaps the highlight of my day. Perhaps my life is sad.

I loved going to the Lyndon B. Johnson Presidential Library in Austin (I think I went at least four times while we lived there) and it was really fun to see how different the JFK one was.
While the LBJ library focused a primarily on the events going on in the US and the world during LBJ’s presidency, the JKF library started with a film about JKF’s life (narrated mostly by him, which was awesome) and ended with his acceptance of the Democratic Party’s nomination.
Then, you went straight into the exhibit hall where you walked through a replica of a little downtown, with storefronts showing the kinds of appliances and other things that were popular during that time period, a campaign headquarters building, a studio where you could watch the Nixon/Kennedy debates (I have heard of these my whole life, but I don’t think I’ve ever actually seen any footage of them), and then Walter Cronkite’s desk with the state by state results of the election. It was beautifully done.
Then you went into a big open area where you could watch his inaugural address, before you were ushered into what looked like the White House. There was a long hallway with various rooms off it (one to watch press conferences in, another with gifts from different countries, one about the space program, one about the effort involved in writing his inaugural address, another one about his brother’s role as attorney general, etc).
The part that surprised me the most was that when you left the White House section, there was a long hallway painted dark blue with the date of his assassination on the wall. That was it. No other information whatsoever about his death. Frankly, if you didn’t know JFK had been killed, you probably wouldn’t have had any idea why the exhibit came to such a brief stop. I assume the idea was that they wanted the museum and library to focus on his life and his accomplishments, rather than his death.
Bart and I both commented how well designed the exhibits were – not too much information overload, but enough that you could really learn a lot. At the end of the exhibits, there is a big atrium that looks over the harbor and the Boston skyline with a giant American flag hanging over the top. 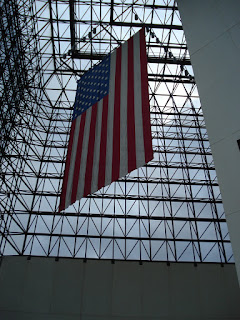 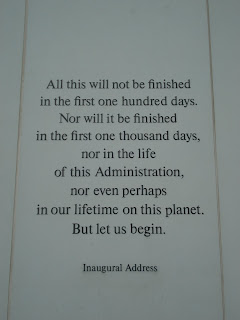 And then, we went to lunch at Five Guys. The night before, we’d been with some friends and they’d mentioned how much they liked it. I’d heard about it through the blogosphere, so I was instantly on board when Bart said, on our way home, “We should go to ‘Five Guys Named Mo’ tomorrow for lunch.” After I stopped laughing myself sick over the fact that he truly thought the name was “Five Guys Named Mo,” I agreed. 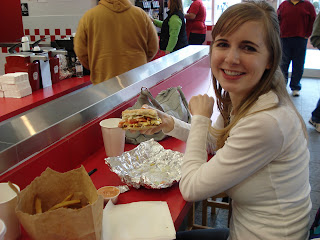 It was not a mistake. This picture is making me hungry. 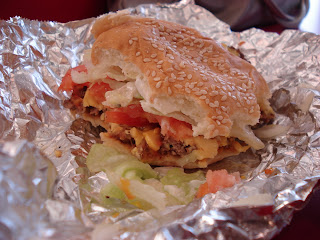 Anyway, despite the surprising amount of effort it took to just force ourselves to get out the door, it was a delightful afternoon together and fun to see new things in the area. Now to decide what to do next Saturday. . .
0 shares