Have you tried an escape room? We went to Escape Room Phoenix with two other couples – here’s how it went down as we tried to escape the room!

You know those people who are always doing really fun things, and you wonder why you’re sitting home on your couch?

My cousin Peter and his wife Kortney are those people.

Last January, a few weeks before Star was born, they came out to visit us in North Carolina (they’re on a mission to visit every state capitol and so they stayed with us while they hit Raleigh, Columbia, and Richmond), and at some point, they mentioned an escape room.

I’d never even heard of an escape room, but as they described it, I thought, “This is something I want to try.”

A few weeks ago, Escape Room Phoenix offered to let us try it out, and more than a year after I first heard about the concept of an escape room, we finally got to experience it ourselves.

If you aren’t familiar with an escape room, the basic idea is that a group of you, usually between 4 and 8 people, are locked in a room and you have sixty minutes to solve a bunch of clues and puzzles in order to escape the room – the door usually has a key or a code that you have to find in order to get out.

When we went to Escape Room Phoenix, they told us that legally they aren’t allowed to lock people in a room, so the door we entered remained unlocked, but the door we were trying to get OUT of was locked.

I’ve heard some people say that an escape room sounds like their worst nightmare due to claustrophobia, and I’m fairly claustrophobic myself, but this didn’t bother me a bit. The rooms were small but not TINY, and you always know you could just walk out the unlocked door if you wanted to.

The Escape Room Phoenix location we went to had two escape room options, and, due to timing, we picked the harder one. It had a 14% success rate, and the fastest time ever was 55 minutes.

We’d planned to go with another couple, but as the day got closer and I kept remembering the 14% success rate and the fact that there was room for another couple in our group, I thought maybe we should improve our odds by inviting one more couple.

The day before, I texted some friends of our who had done several of these before, and they agreed to join us. I figured our odds of succeeding had just gone up at least a little.

The escape room we picked was called CASHOUT and the basic premise is that you have a friend who has been kidnapped and the only way to save them is to break into a Las Vegas casino vault and steal a bunch of diamonds. 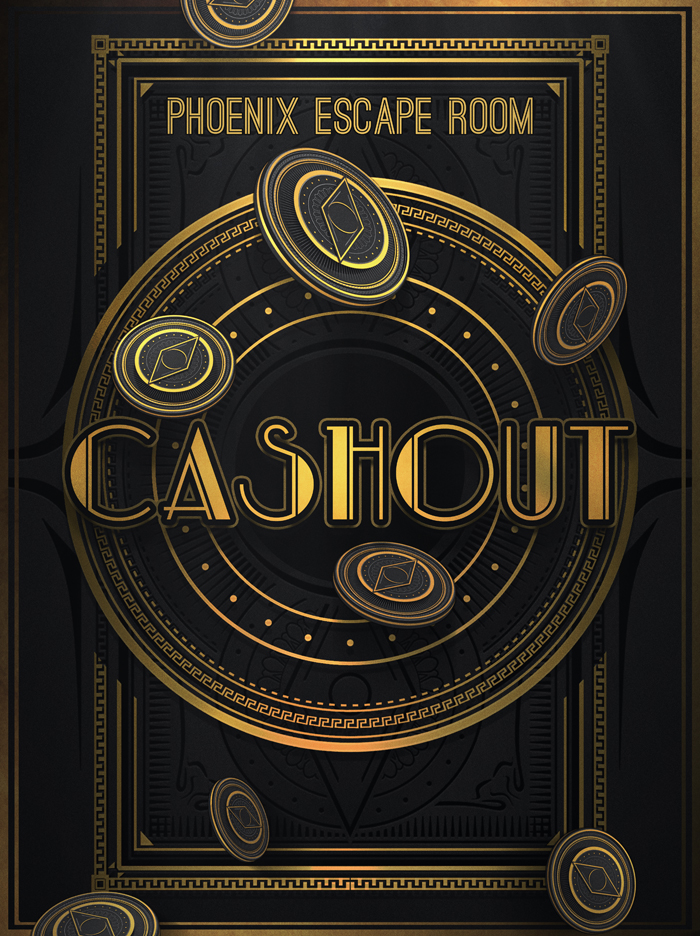 Whenever I’d seen someone do an escape room before, I’d imagined a basically empty room (I think I was imaging a bank vault or something?), but that wasn’t true at all.

There were lots of props in the escape room, with clues and objects hidden all around them, under them, inside them, and behind them. In this one, because it was Vegas/casino themed, there was a blackjack table (or . . . maybe it was a poker table? I’m a very bad Las Vegan), a slot machine, a bar, and a bunch of other large and small items of decor.

We were escorted into the room, the television on the wall had a huge timer set to 60 minutes, and then the door shut, the timer started, and it was go time.

Immediately, we started searching through everything trying to find clues. The clues aren’t necessarily in order, so you may have clues you just set aside until you find more information that helps you solve them.

There were locked briefcases we needed codes for, multiple padlocks, phone numbers, morse code, puzzle pieces, and more puzzles that had to be solved. Some were pretty straight-forward and others took a lot of consulting among ourselves (this particular one also had periodic hints given via the television screen).

Sometimes we’d split into smaller groups to work on a particular problem or try a code on a lock and sometimes we’d all gather around to try and figure out a clue.

The hour raced by and with four minutes to spare, we unlocked the final door to successfully escape the room.

The manager told us we were the first group to successfully escape a room that day (of course, the group before us was comprised entirely of 13 and 14 year-olds, so maybe I shouldn’t be too impressed with us), and we posed with some braggy signs. 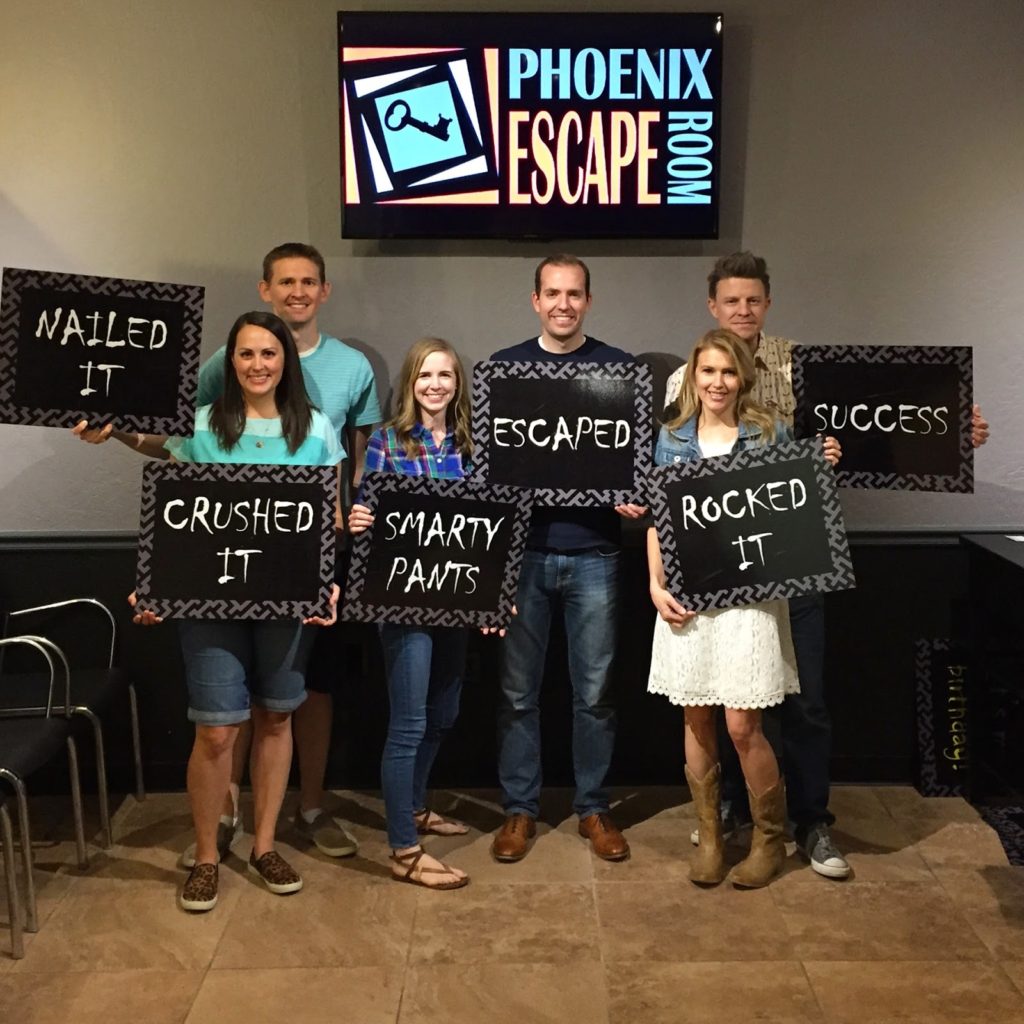 I’ve been thinking about the various puzzles and clues all week and now I’m dying to go back and do another one. Phoenix Escape Room has five different games in two locations, so we’ve got plenty of material (they also have locations in Denver, Bend, Frisco, and Bakersfield).

Have you done an escape room before?

It’s such a different and unique activity – I’m wondering if I can convince my family to do one at our family reunion this fall. . . .

If you liked this post about Escape Room Phoenix, you might enjoy these other fun date ideas: