A couple of months ago, Bart and I conned my brother-in-law Adam into watching Ella for a couple of hours on a Saturday and we saw Mission Impossible at the dollar theater.

On the way home, we started talking about Mission Impossible parties and decided it would be really fun to throw one for Bart’s birthday. A friend of ours has a birthday just two days after Bart’s, so we asked them if they wanted to co-host with us so we could all participate.

Two weeks ago, we recorded Bart issuing mission directives over the theme song and then ending with a “this message will self-destruct in five, four, three, two, one . . . ” and a loud explosion.

We packaged the CDs in large manilla envelopes along with additional instructions about location and time and a tiny water gun, and then sealed the whole thing with a “Mission Impossible: Birthday Protocol” sticker and then the other couple ding-dong-ditched them on the doorsteps of everyone on our invite list. 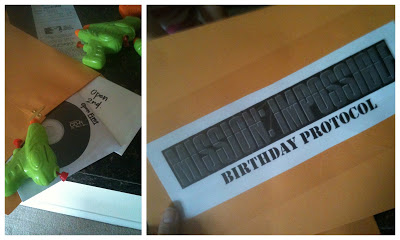 The response was terrific – people were delighted by the invitations, the funny audio, and the little waterguns. Six of the seven couple we invited were able to come.

On the night of, everyone met at one of our favorite Indian restaurants. After everyone had finished, we assigned each couple to a team (each team had two couples) and gave them a large paper sack with their first clue, a list of extra assignments, and a couple of things they needed for their mission.

Each team had a route with four total clues (Bart and I planned and set-up two of the routes and our friends did the other two so we each would be able to do a route that was a surprise to us).

From the time we left the restaurant, each team had 90 minutes to collect all four clues, complete as many of the extra missions as possible, and return to our place for dessert. For every minute you were late, ten points would be deducted from your final score.

One of the group’s clues started with a location (the name of a park, scrambled) and a specific item at the park (a large plastic dinosaur, also scrambled).

Under the dinosaur, we’d taped a little crossword puzzle with about eight words. Once they’d solved it, they had to pick two of the words that named a location (a local pizza place) and go in wearing a goofy fireman’s hat we’d included in their mission sack. There, the teenagers at the counter gave them the next clue.

This one referenced a book and after they’d figured out the title, they had to go to Barnes & Noble and find the copy of the book that had the final clue hidden in it. That clue directed them to finish up as many extra missions as possible and then return to our house by the deadline.

The list of optional missions included things like a picture of your group in an elevator and a picture of three couples kissing and a brown bag of Snicker bars labeled “Ransom” with a note saying “here is the ransom you demanded. Please return our cat, Fluffy, as we miss her dearly” which had to be anonymously dropped on someone’s doorstep (seeing a Facebook post about it from a confused neighbor the next morning was priceless). Each mission had a different number of points assigned to it, depending on the difficulty. You can see the entire list and the accompanying points here.

The only mishap was that one of the other teams was supposed to go get
their clue from a local restaurant and the girl at the counter that our friends had left the
clue with failed to pass on the message or leave the clue (despite
acting extremely enthusiastic about participating) and so that was a
pretty frustrating half hour for that team as they practically turned
the restaurant upside down looking for a clue that just was. not.
there. But, they were good sports.

If we were to do it again (and I think it’s quite likely that we will recreate this in some form down the road), we’d do a longer list of optional missions (every group finished all but one) and probably make five or six clues per team. Meeting for dinner was nice because everyone got to socialize before splitting up, and then gathering again for dessert was a nice ending (and people LOVED sharing stories about their adventures).

We had bottles of sparkling cider for both of the couples on the winning team, plus cheesecake and ice cream for everyone else.