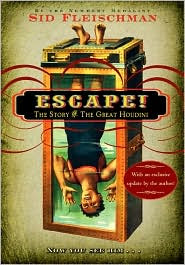 9 of 10: Non-fiction of the best kind. Escape! The Story of The Great Houdini is a phenomenal book for both fiction and non-fiction readers.

My dad is an amateur magician and our hallway is covered in framed magic posters. And, of course, Harry Houdini has always been king. I have heard about him for as long as I can remember.

But many of the details about his life were very very fuzzy to me. I knew he’d been punched in the stomach by a college student a few days before he died, but I wasn’t sure if it had caused his death or how or if that was even true. And I couldn’t have even told you what decade he died in. Was it the 20’s or the 60’s? I had no earthly idea.

escape! The story of the great houdini by sid fleischman

Sid Fleischman, who won the Newbery award 22 years ago for The Whipping Boy, was, apparently, something of an amateur magician himself and worshiped Houdini (like virtually every other young magician). He even met Houdini’s wife, Bess, when he was young, so he had a particular interest in this man.

Like any good magician, Fleischman doesn’t give away any of Houdini’s secrets – there is little or no discussion on how he does the tricks, but rather the focus is on Houdini’s life and career and lasting fame, eighty years after his death. And you know what? I love Fleischman for that.

One of the things that made The Story of the Great Houdini so fascinating to me is the fact that Harry Houdini had a bad habit of doctoring his own history, including in his own diary, making many of the details of his life difficult to pin down. Fleischman does an excellent job noting the places where records don’t match up and giving possible scenarios for the reader to decide among.

Houdini is just a spectacularly interesting person and this book made him even more so to me. What a talented, driven, flawed guy he was and Fleischman, though obviously very impressed by him, is also honest about Houdini’s vices, as well as his prodigious fame and talent.

I listened to this on CD, so I missed out on the pictures, which is too bad. I’ll probably look for the hard copy next time I’m at the library and glance over it. The audio version, though, was terrifically narrated and the introduction and ending were narrated by Sid Fleischman himself, which I thought was very cool.

The Story of the Great Houdini is appropriate, I’d think, for middle-schoolers and early high school students, not because of the content, but just because the language is fairly high level. I’d highly recommend this to anyone interested in magic, Houdini, or a good biography.

If you liked this review of escape! the story of the great houdini, you might also like these books: