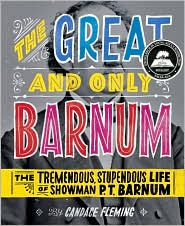 9 of 10: The Great and Only Barnum is just what you want non-fiction to be. There is some buzz about this one getting a Newbery nod and I think it would deserve it. Fun, interesting, and well-paced, I can’t stop talking about this book.

I really knew nothing about Barnum except that he was somehow involved in creating the Barnum and Bailey circus. I wish I had something to add to that list, but really, that was the great extent of my knowledge.

The great and only barnum by candace fleming

The book starts with his early life (what a surprise in a biography, yes?) and tells a little about how he came by his tricky and showman-y nature naturally.

There is a terrific story about his grandfather who was stuck on a boat for a few days with some other men. Only the grandfather had a razon and as they were finally approching shore, he suggested they all shave. But, he told them, to make it fair, everyone would shave half their face, hand the razor to the next guy, and then they’d start over until they were all clean-shaven. When it returned to the grandfather, who had started, he shaved the second half of his face, then declared the razor dull and proceeded to sharpen it, “accidentally” losing his grip on it and letting it fall into the ocean. When they pulled ashore, all the men, except the grandfather, had half a beard. Oh, how I laughed.

Barnum early on discovered that he prefered to figure out how to make money than to actually, you know, do manual labor. While running a store for his uncle, he bought hundreds green glass bottles for almost nothing. His uncle was furious – what would they do with these bottles?! – but Barnum came up with a great idea. He sold tickets for $1 each, promising that one in two tickets would win a prize. The prize, of course, was the bottles, and people walked away happy and the store turned a nice profit.

What really rocketed Barnum to fame was not the circus, but his musuem of wonders that he opened in New York City (had you even heard of this? I never had). It had seven main sections, each filled with various strange animals, historical objects, and people with unusual physical properties (a 25 inch tall man, a giantess, a boy with hair all over his face, etc). People swarmed there and Barnum was a master marketer.

Eventually Barnum did get into the circus business, originally on his own, and it was his idea to have the circus travel by railway (they could put on three times as many shows), the concept of the three-ring circus (with one ring, he could not get people to stay in their seats because they couldn’t see and it made the people who’d paid more for better tickets angry), and when he brought an elephant named Jumbo in, it was so popular that the word “Jumbo” came to mean “huge” (whip that tidbit out at your next cocktail party).

Barnum, more than anything else, was a marketing genius. He was so good at figuring out how to attract people and then also how to get them to come back. Fleming does a great job of making him both a little slick, but also generally good hearted (the famous “there’s a sucker born every minute” is falsly attributed to him – it was one of his competitors, bitter at Barnum’s success who said it).

I could go on all day about the fascinating people, stories, and historical events that pepper this book, but I won’t. You can go read it yourself.

Fleming has made a name for herself with her scrapbooks of Ben Franklin and Eleanor Roosevelt and the Abraham and Mary Lincoln, but this one is not a scrapbook. There are a lot of pictures and text boxes occasionally to tell a little unrelated or semi-related story, but overall, it reads very smoothly; I prefer this format to the scrapbooks which I find a bit jolting to read.

I hope The Great and Only Barnum gets some award nods this weekend. It certainly, certainly deserves it.

If you liked this review of the great and only barnum, you might also like these books: