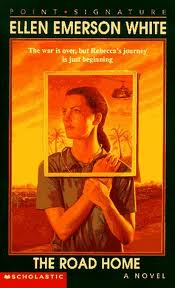 9 of 10: Following Rebecca’s stay in Vietnam as a nurse and then her efforts once she returns home to put her life back together, The Road Home is funny, heartbreaking, and terrifically written. I loved every page of it.

Angie of Angieville recommended this book at least a half dozen times for Tell Me What to Read. Of course, it never got chosen, and of course, I never had the foresight to go pick it up myself.

And then, in an email conversation with Jeanelle about Sarah Dessen, she asked if I’d read The President’s Daughter by Ellen Emerson White. I hadn’t, of course, but the title alone made me interested and I vaguely recalled that it was the same author that Angie kept plugging.

Which clearly indicated that Angie might be onto something with the whole The Road Home suggestion.

This is all a long and meandering way to say that I am suddenly a huge Ellen Emerson White fan. Tragically, many of her books are out of print (The President’s Daughter series was just rereleased in 2008), so I’m using the magic of inter-library loan to get copies of some of her other books that I’m now dying to read.

Rebecca is a 21-year-old nurse working in an army hospital in Vietnam. Before the book begins, she was involved in some sort of accident over Christmas that included some causalities and although you get very few details about it all, it is clear that it has absolutely destroyed Rebecca. It quickly becomes obvious that she was, prior to it, funny, light-hearted and energetic. Now she can barely function.

Only two things really keep her going – one is Major Doyle, the chief nurse at the hospital, who has really taken to Rebecca, and the other is Michael, a foot soldier she met in Vietnam whose letters make her feel more alive.

Of course, having someone she cares about on the front line doesn’t exactly make for a calming, restful existence.

It also becomes obvious that things with her family back home are not good either, but, like the Christmas accident, there isn’t a lot of detail. The main point is that Rebecca has a lot to deal with here.

And then, her assignment in Vietnam is complete and she is sent home. Which, in a lot of ways, is even more terrifying then Vietnam. After what’s she’s seen (and as an ER nurse on the front lines, it’s a lot), she knows she won’t be able to just slip back into her old life as if none of this ever happened.

One of the things I found fascinating about this book is that there are lots of things going on that are referred to off-handedly but are never explained in depth. You can gather, eventually, what is going on, but there is never that “let me sit down and explain to another character and thus to the reader exactly what happened.” And you don’t need it. It’s more engaging to watch it play out like a real relationship with a person would – you find out things here and there with brief comments, but you don’t sit down and demand the entire story. This is the case with the Christmas accident, her relationship with Michael, her brother’s absence, the conflict with her father, and the death of her childhood friend Billy.

This book (and her President’s Daughter books) is filled with a dry wit that I find irresistible. The dialogue is so amusing, I kept rereading passages just to laugh again at the funny, funny comments. This book deals with some weighty subject matter, and yet the writing keeps it from being just unbearably depressing. Which is not to say that it trifles with serious issues – it doesn’t.

And these books are smart. They are filled with references to classic books and movies, many of which I’m sure went right over my head, but wow, when I caught one, oh, did I feel like a smarty-pants.

There is a fair amount of swearing in this book, but it’s not as if the f word is constantly being thrown around. It didn’t detract from the book for me, but I like to give a little warning.

Interestingly (to a librarian), this book is categorized by the publisher as juvenile, but the Austin Public Library had it shelved in the adult section (which I didn’t notice for a while because I just picked it up from the hold shelf). With a 21 year old protagonist, it really could go either way.

The Road Home book is actually a companion book to a series she wrote under a different name (Zack Emerson) which follows Michael and his company. In the third book, apparently, they meet up with Rebecca and after that series was complete, Ellen Emerson White went back and wrote this one to follow-up on Rebecca’s character.

You better believe I’ll be reading that series as soon as I can get it from inter-library loan.