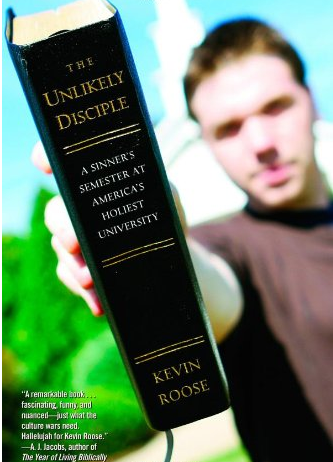 8 of 10: The Unlikely Disciple, about a non-religious student’s semester at a religious university, easily kept me reading, but I couldn’t quite fall in love with it for a variety of reasons.

I tend to be interested in books with unusual or unlikely premises, so this one, about Kevin Roose, a Brown student who decided to transfer to Liberty for one semester, was immediately intriguing to me. Of course, Brown is one of the most liberal, secular schools in the country, and Liberty is an extremely conservative Baptist school, so the change is a big one for Roose.

the unlikely disciple by kevin roose

The book basically chronicles his semester there – the classes he takes, the people he meets, the evangelizing trip to Daytona Beach during spring break he goes on, and the surprises and non-surprises he encounters.

The Unlikely Disciple is well-written and moves quite quickly (although I found the timeline to be somewhat jumpy and slightly non-chronological); it definitely has that journalistic/feature style to it that makes for easy reading.
I will admit to knowing next to nothing about Liberty University before this book (it was started by Rev. Jerry Falwell (the founder of the Moral Majority group)).

Roose talks a lot about how surprised he was by many things at Liberty, especially the vast differences between various students (he’d anticipated they’d all be fairly similar and equally devoted), and I think a lot of readers probaby have the same experience. For me, however, having actually attended a conservative religious university, it didn’t catch me off guard nearly as much (although there are significant differences between BYU and Liberty, of course).

Perhaps more than I ever have before, I realized how vital liking the narrator is in a memoir/first-person non-fiction book. My mom has been reading A Homemade Life and couldn’t stop talking about how much she enjoyed Molly’s writing and personality. When I read that book, I felt the same way, whereas I had the opposite experience when I read Eat, Pray, Love.

As far as The Unlikely Disciple was concerned, it was somewhere in the middle – I liked Roose well enough, but not enough to just fall in love with his book. And it does feel a bit uncomfortable to have him attend Liberty with the express purpose of writing a book about it afterward. It just doesn’t seem quite authentic (something Kelly pointed out in her review too).

The main thing that the book emphasized for me is that, no matter how much Roose found himself liking his fellow students or much of the environment at Liberty, there are things you just can’t really understand when you are looking at the world through an absolutely different lens.

Either way, The Unlikely Disciple an interesting read and I certainly found it easy enough reading, but there are memoirs and narrators I’ve enjoyed more.