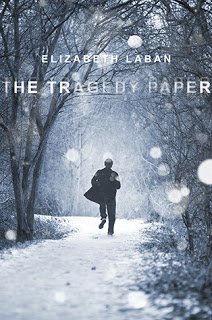 I’ve seen a few reviews of The Tragedy Paper floating around the internet, and it seems that some people are not fans (Elizabeth, we can still be friends)

Sometimes this makes me all paranoid that maybe I was the only person alive who loved it and possibly I have no taste at all.

In this case, I don’t really care. I felt like I hadn’t read any decent contemporary YA books in quite some time and this one really drew me in. I flew through it, enjoying every page, in about a day and a half.

the tragedy paper by elizabeth laban

The Tragedy Paper has two narrators. The first one is Tim Macbeth. He is an albino boy who transferred to the Irving School (a private boarding school) in the second semester of his senior year. Because he’s an albino, he’s always felt a little sidelined and he hopes that he can have some sort of positive high school experience before he graduates.

What he doesn’t expect is to fall for Vanessa, who is a popular and very pretty senior at Irving. He meets her on his flight out to the school and they seem to have a connection, but once they arrive at school, she (of course!) has a boyfriend. Who is kind of a scumbag. (Of course!). Some semblance of a relationship between the two of them develops, but neither of them quite seems to know what to make of it, and Vanessa certainly doesn’t want it to be public. Things very quickly get complicated.

Also, Tim is recounting the whole story after the fact. So you get a lot of commentary from him about how things played out or how he sees things now with the benefit of hindsight.

The other side of the story is Duncan. He’s a current senior at Irving, the year after Tim and Vanessa were seniors. He knows how their story ends (even though, as the reader, you don’t), and it’s quickly obvious that, whatever happened at Irving the year before, it’s made a deep impression on Duncan.

Which brings us to the Tragedy Paper. Every year, Mr. Simon, the senior English teacher, assigns the students to finish out their high school experience by writing a paper on tragedy – defining it in both literature and real life, using whatever examples they see fit. It’s become legendary at Irving.

And as Duncan moves through his senior year with the Tragedy Paper hanging over his head and simultaneously learns more details about what exactly happened with Tim and Vanessa, he can’t help but start to draw parallels.

I loved the way The Tragedy Paper is set you up so you watch Tim moving steadily toward whatever it was that happened, and Duncan looking back at the events of the previous year, on the one hand trying to not think about it, but also unable to quit hearing more about Tim’s months at Irving.

It’s not a perfect book – there’s a portion of the book about a quarter from the end that drags for a while. Everything has been set up, but there’s a little bit of delay before the climax. This part, I could have done without.

And Vanessa? I really liked her at the outset of the book, but by the end, my patience for her was growing a bit thin. Tim and Duncan, though, I really thoroughly liked, even when they were being complete morons.

Now I need some other people to read it and tell me if I’m just completely wrong or if The Tragedy Paper really was as gratifying a read as I thought it was.