(I know it. . . other people’s vacation pictures. Pretty thrilling around these parts today).

Yesterday was the last day of Bart’s two-week spring break. Today, it’s back to normal life.

After starting off Spring Break with a week-long cruise to the Bahamas, we laid low at home for most of last week, but we finished off with a bang in Washington DC over the weekend.

My parents were in DC for a couple of days while my dad did some speaking, so we took advantage of their nearness by driving up to spend two days with them. 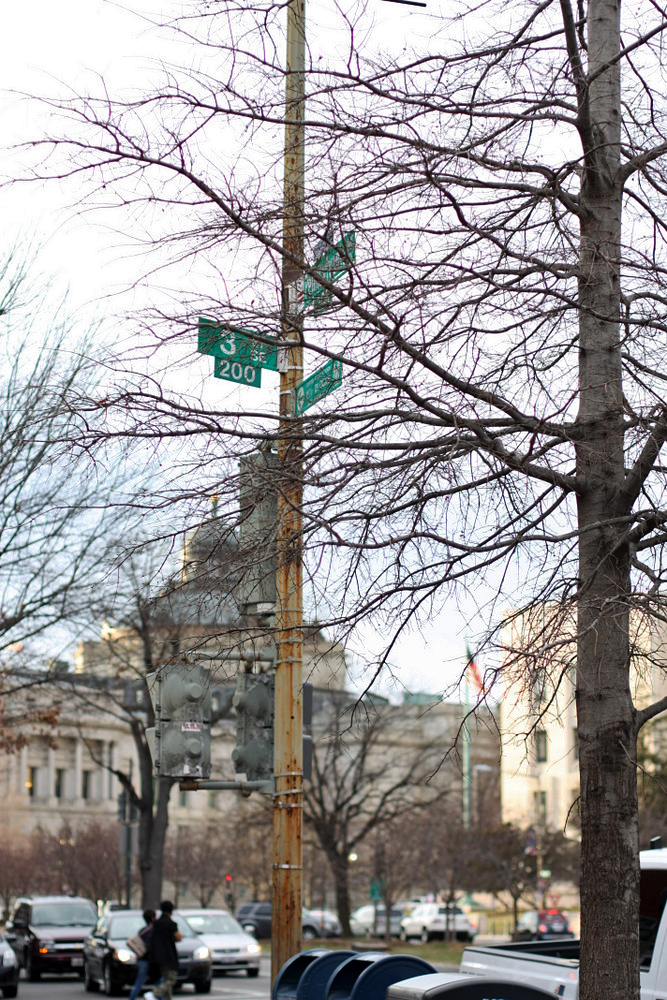 Since they weren’t arriving until very late on Thursday night, we stayed with Preethi, Dan and children (who were very nice about the fact that we completely disrupted their bedtime routine by doubling the number of occupants in their home).

Not only did they serve us a fabulous dinner, we also finished off the evening with a chocolate tart with Thin Mint cookie crust.  Yes, it was amazing.

The next day, after Ani took a long nap, we said goodbye to Preethi and drove into the city, picked up my mom and headed over to the Natural History Museum (ever since I went to the one in NYC, Ella’s been begging to visit an “animal museum”).

Besides checking out the animals, we also spent some time looking for Bart’s wedding ring which disappeared during the trip, thanks to the cold shrinking his fingers down to bony toothpicks (spoiler! He found it in his backpack when we got home on Saturday – apparently it slipped off while he was grabbing snacks and keys for the museum visit).

When Ani started screaming and screaming and screaming, we decided maybe it was time for lunch, and we walked over to Rasika for some takeout (a recommendation from one of Bart’s classmates who lived in DC for a long time). We took our lunch over to a nearby park and ate in the sunshine while the girls ran themselves out. Also, the crispy spinach appetizer was one of the best things I’ve ever eaten.

The hotel my parents were staying in was 100% booked, so we used Priceline to snag a room at the Liaison Capitol Hill for $75 (how did I ever get hotel rooms before I learned about name-your-own-price?).

Ani’s first nap was definitely wearing off, so we checked into the (super nice!) room and I got everything situated while my mom read to Ella. We put Ani down for a snooze and my mom stayed behind with her while Bart, Ella and I went to take a little private tour of FBI headquarters. (You can tell from the photo below that Ella was super thrilled about this particular outing). 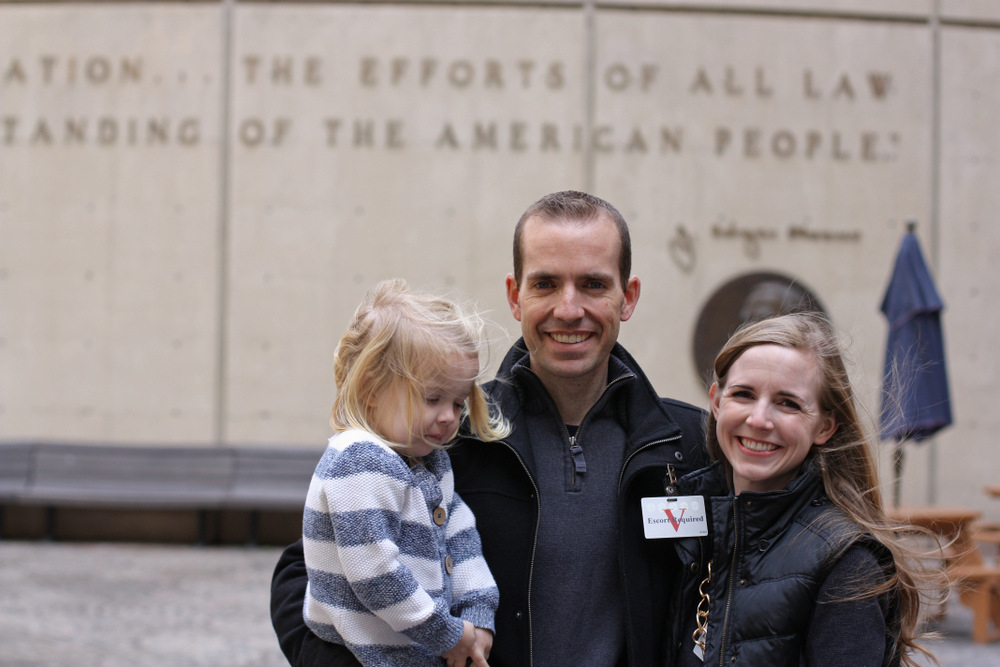 Two hours later, we headed back to the hotel and arrived just as Ani was waking up (the late nap was perfect, since it meant she’d last through dinner).

Ella hated the wind blowing in her eyes on our walk back, so she asked to borrow my sunglasses. Which, obviously, fit her super well. 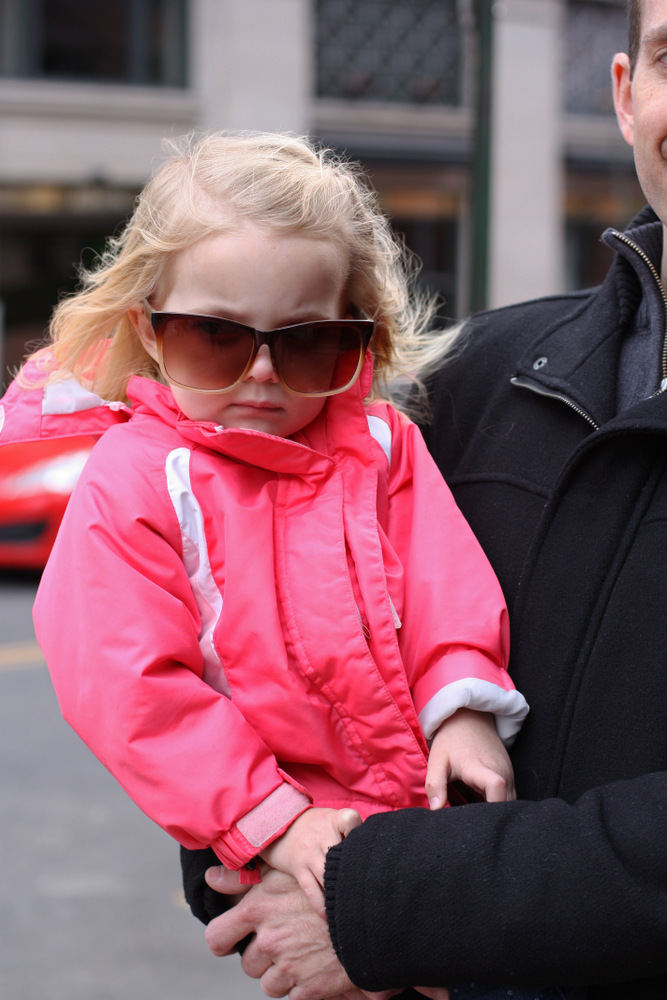 My dad was done for the day, so we met him up on Capitol Hill for dinner. 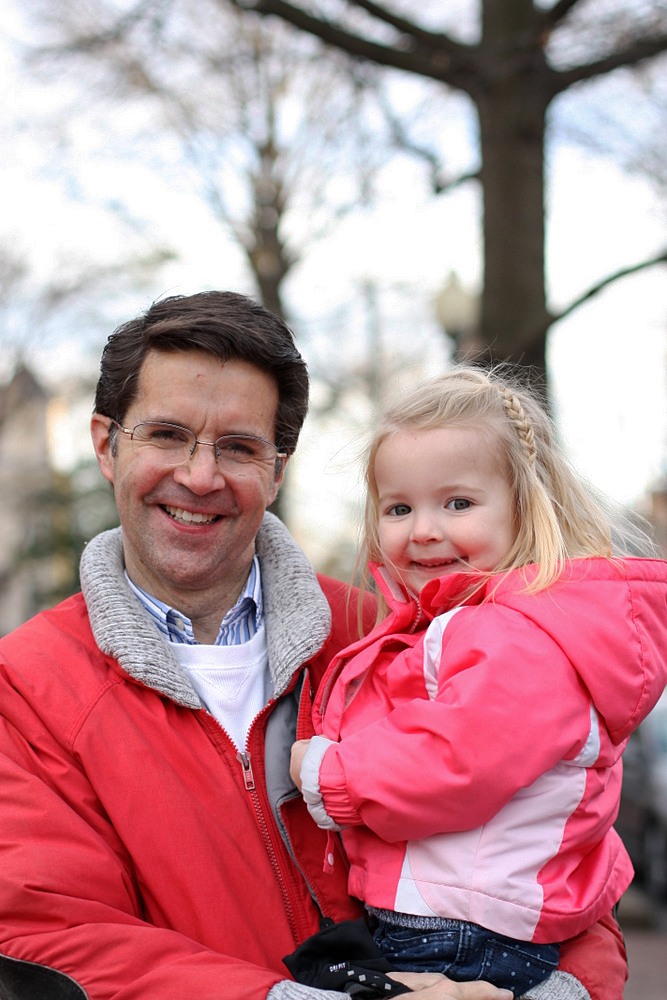 The weather had gotten quite nice and it was a beautiful section of town, so we enjoyed being outside for a bit before dinner. 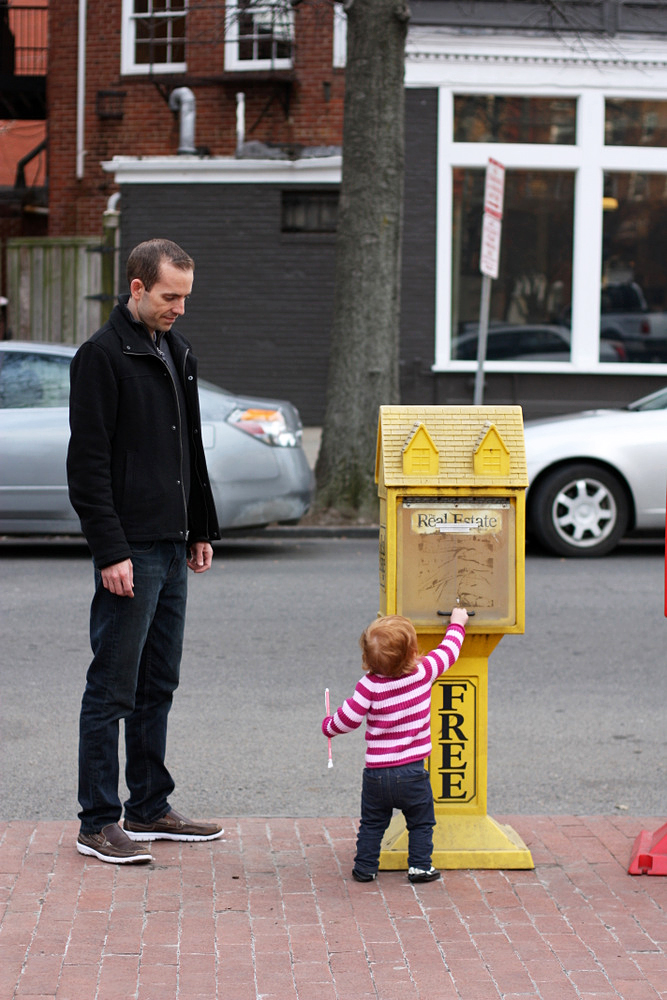 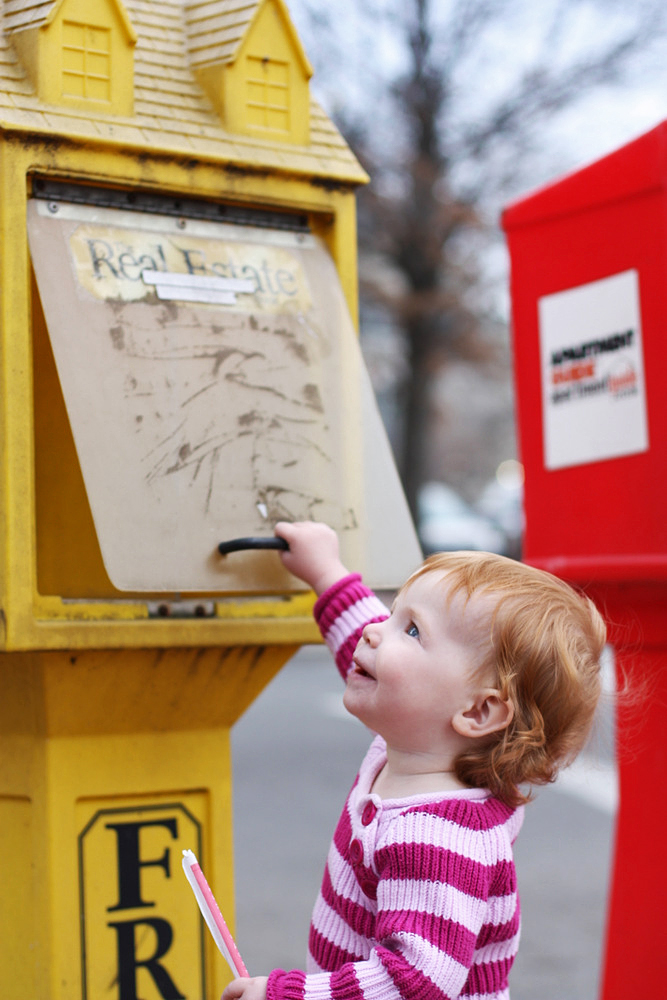 We’d planned on having dinner at Good Stuff, but after our Indian lunch, none of us were really feeling like burgers. Instead, we grabbed some very tasty salads at SweetGreen and THEN went to Good Stuff for milkshakes (we got three child-size ones: toasted marshmallow, salty caramel kiss, and banana cream pie with fudge swirl). 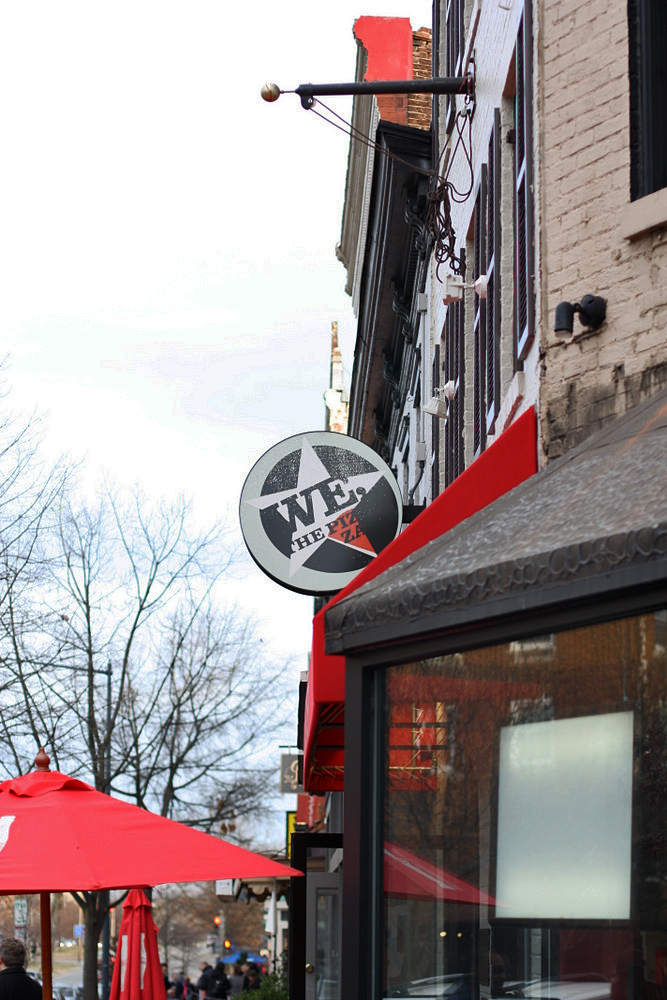 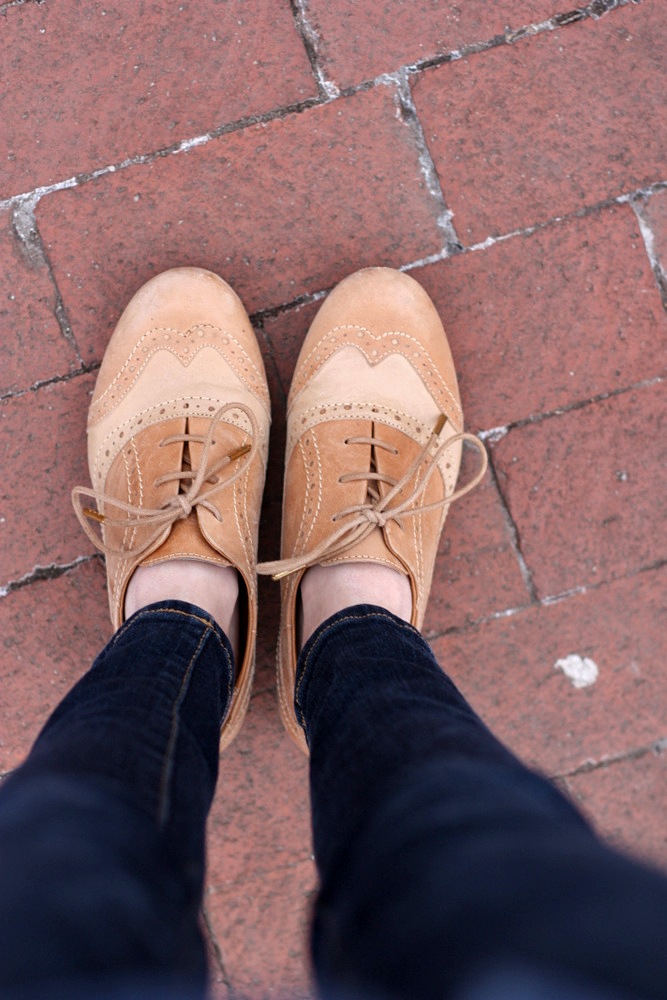 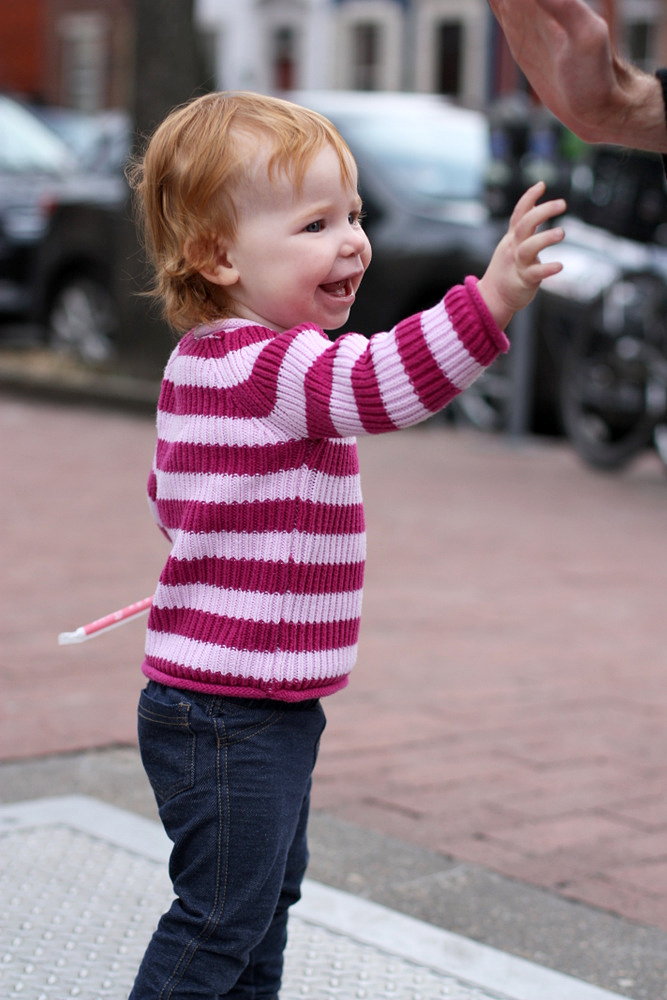 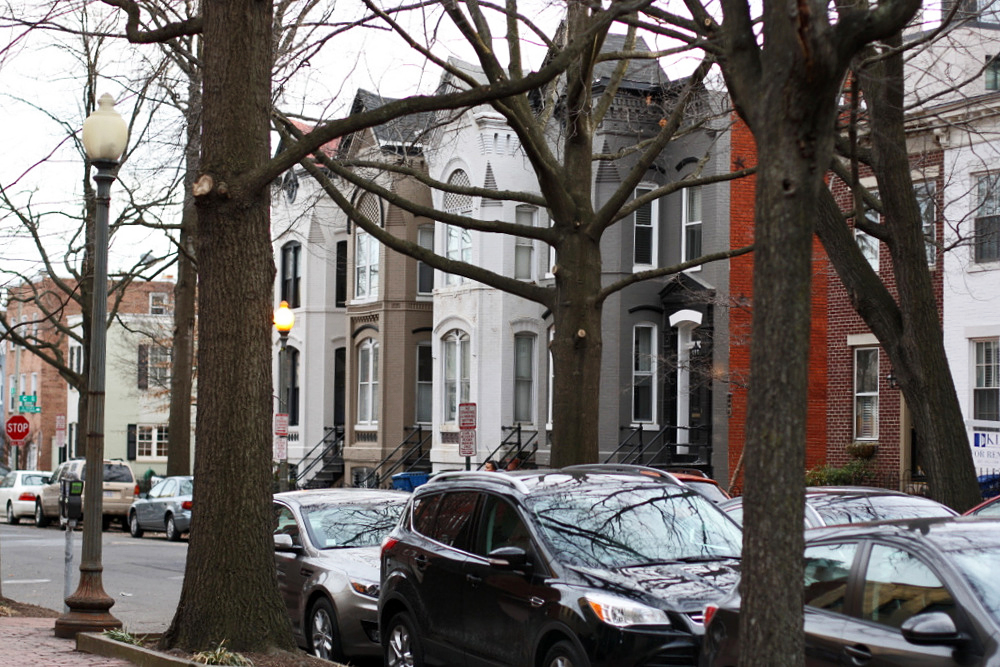 After dinner, we headed back to the hotel, put the girls down and read in bed for about. . .ten minutes before we were both so exhausted we fell asleep at 9:15. We are major party animals, obviously.

Ella woke up at 7:00 on the dot (we’d foolishly forgotten to reset the clock to be slow so she’d sleep in), but Ani was still snoozing, so Ella and I set up some pillows in the bathroom and read a couple of chapters of Betsy and Billy until Ani woke up a little before eight.

We dressed quickly and just as we were loading the girls in the car to head to breakfast, my mom texted to say my dad was feeling sick and he’d be staying at the hotel for the day.

So, we swung by their hotel and picked her up and the five of us headed to Eastern Market. We wandered around a bit (the weather was PERFECT and the neighborhood was absolutely charming), before buying some breakfast. 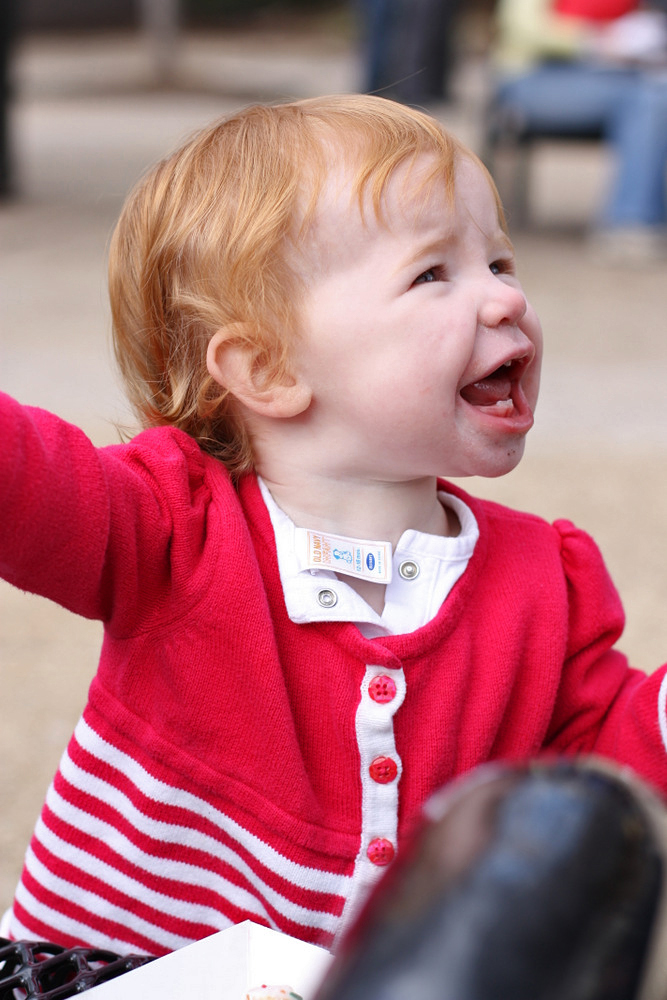 We got a couple of doughnuts from DC Donuts (the Oreo chocolate doughnut Bart got was one of the best doughnuts I’ve ever eaten), two crepes from Crepes at the Market, and a bag of ridiculous candied pecans.

I bought a quart of apple cider too (is this not the cutest mini jug you’ve ever seen? I’m kind of devastated Bart threw it away), to wash it all down. 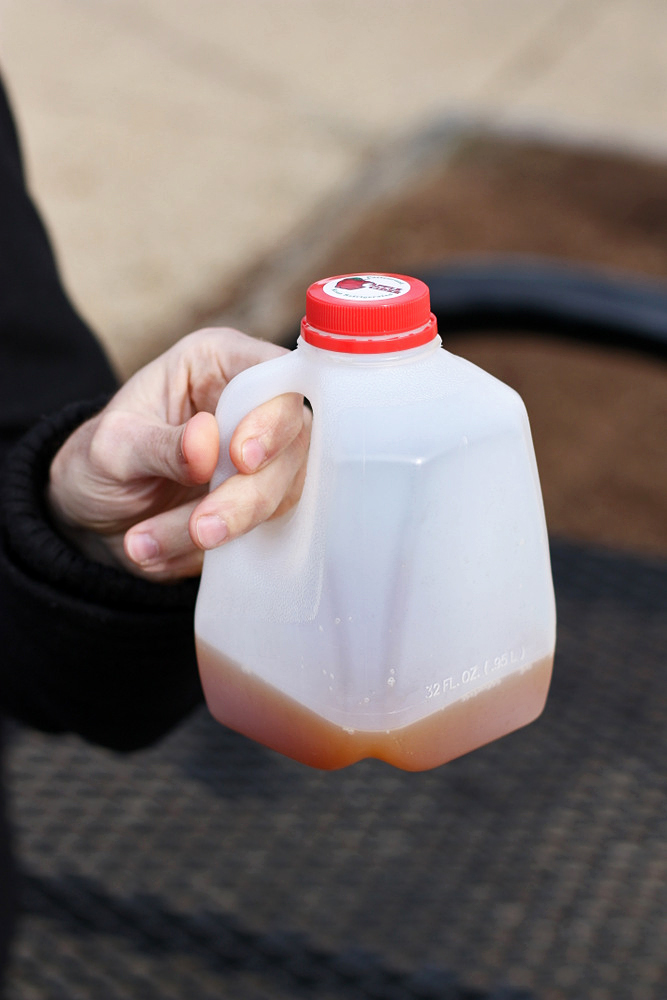 Bart dropped Ani and me back at the hotel, and I put her down for a nap and packed up our stuff, while Bart and Ella took my mom back to her hotel and filled up the car with gas for our return drive.

Once Ani was up and we checked out (bless the nice man at the front desk who let us delay our checkout for an extra 40 minutes even though the hotel was completely booked so we didn’t have to wake Ani early), we headed out to the National Zoo.

It took us a bit to find a parking spot about five blocks away, but the sun was out and we all ditched our jackets and headed in to enjoy a few hours together before my parents flew back to Vegas and we drove back to Durham. 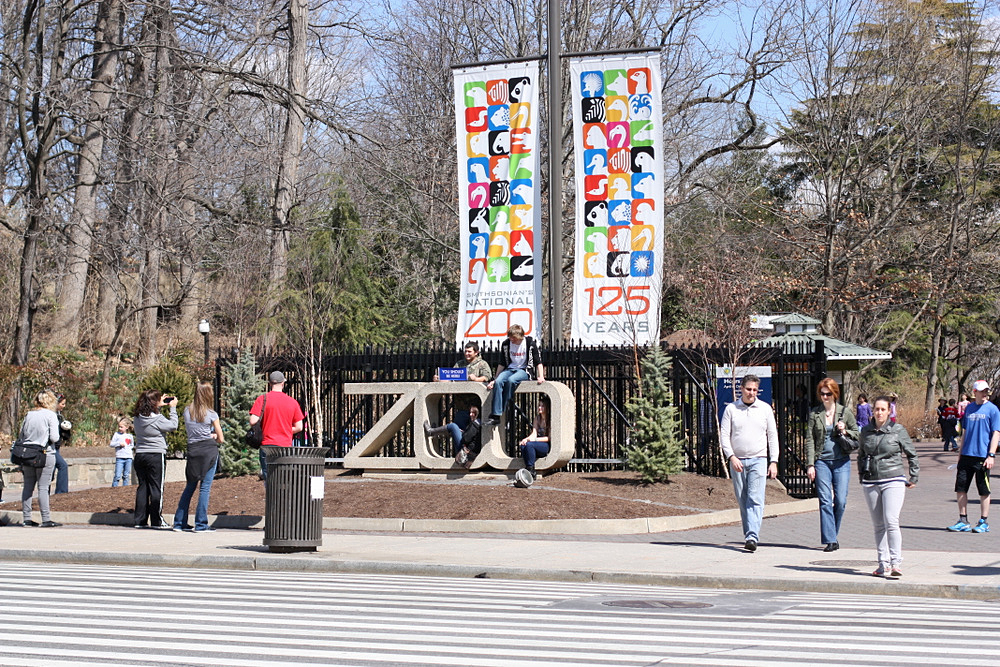 Ani has just started getting really into animals and she was just beside herself with joy at every new exhibit. 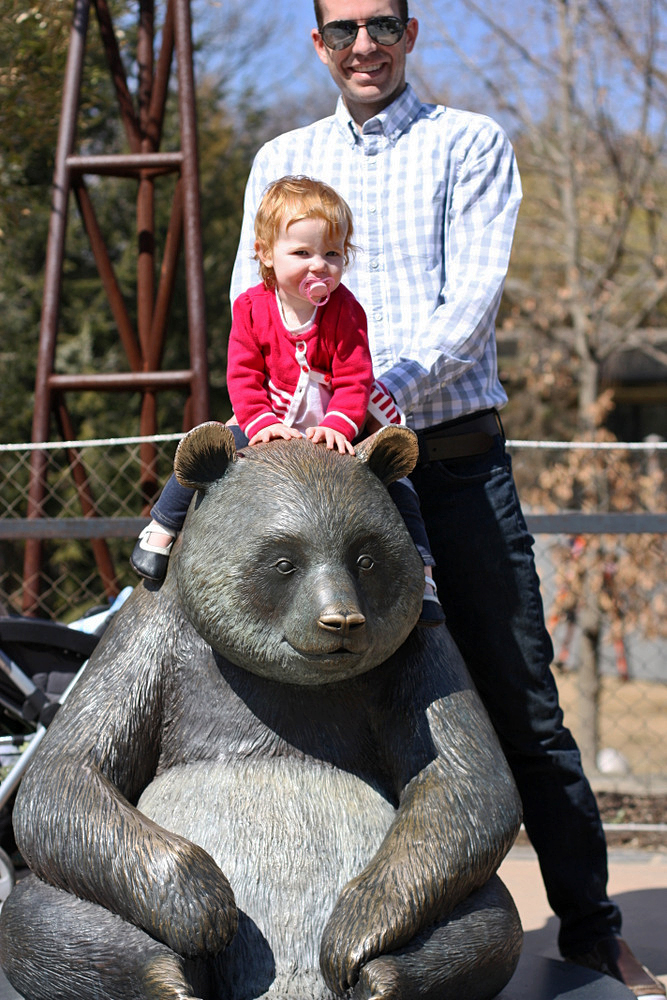 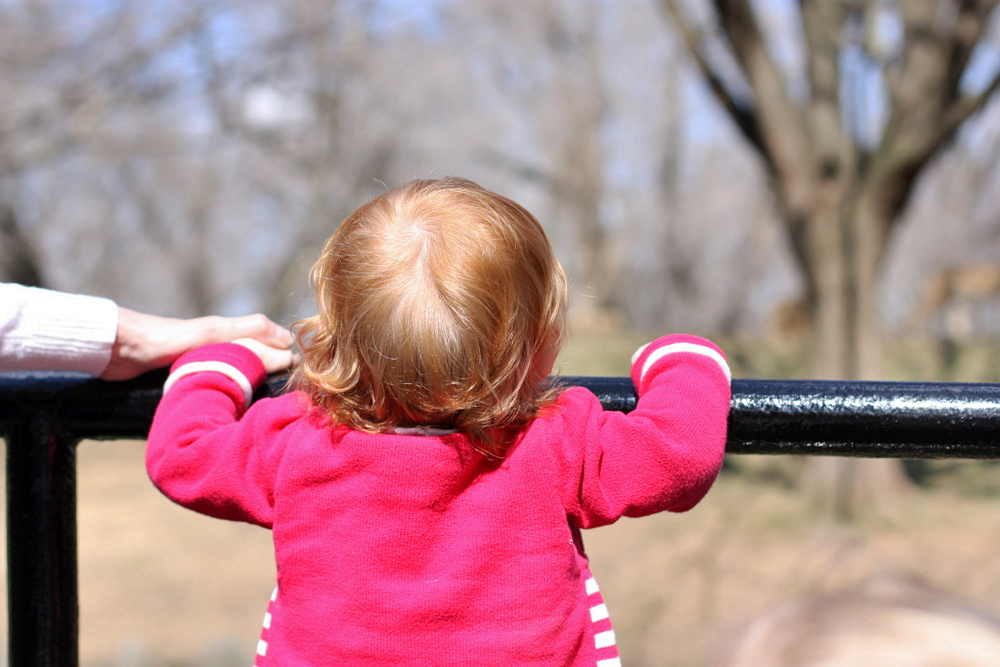 She was unbelievably hesitant about my mom for all of Friday and much of Saturday (I guess she remembered that the last time we saw them, I disappeared for three days), but by Saturday afternoon, she finally warmed up to her. 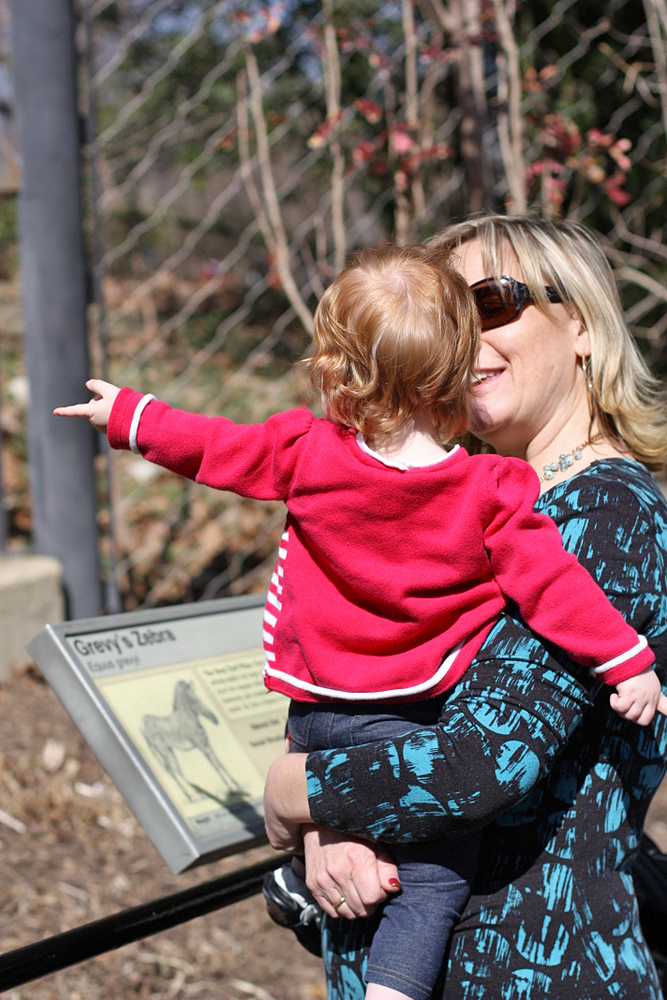 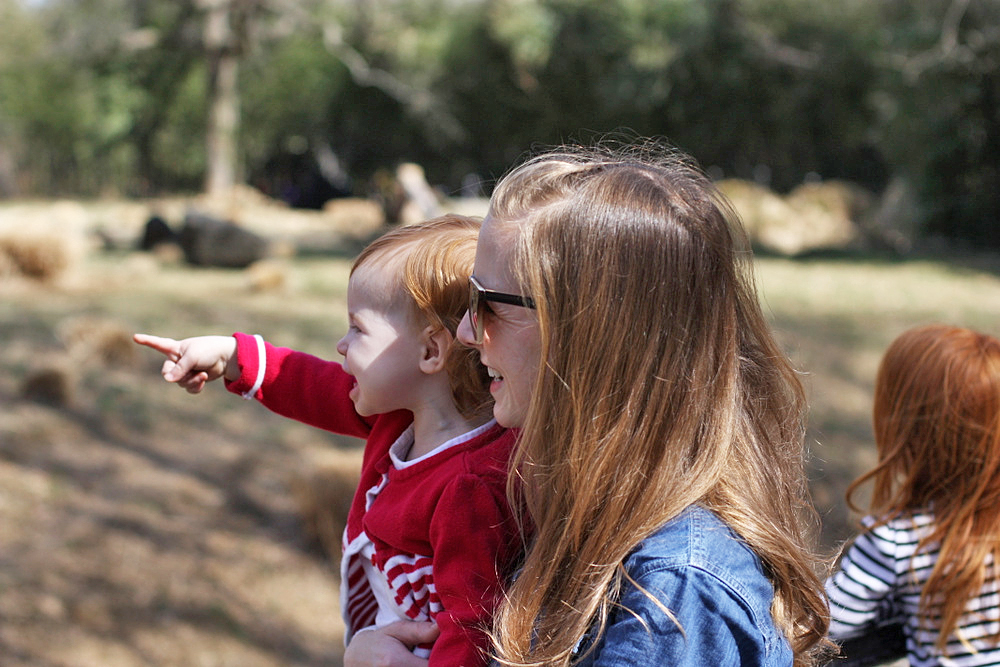 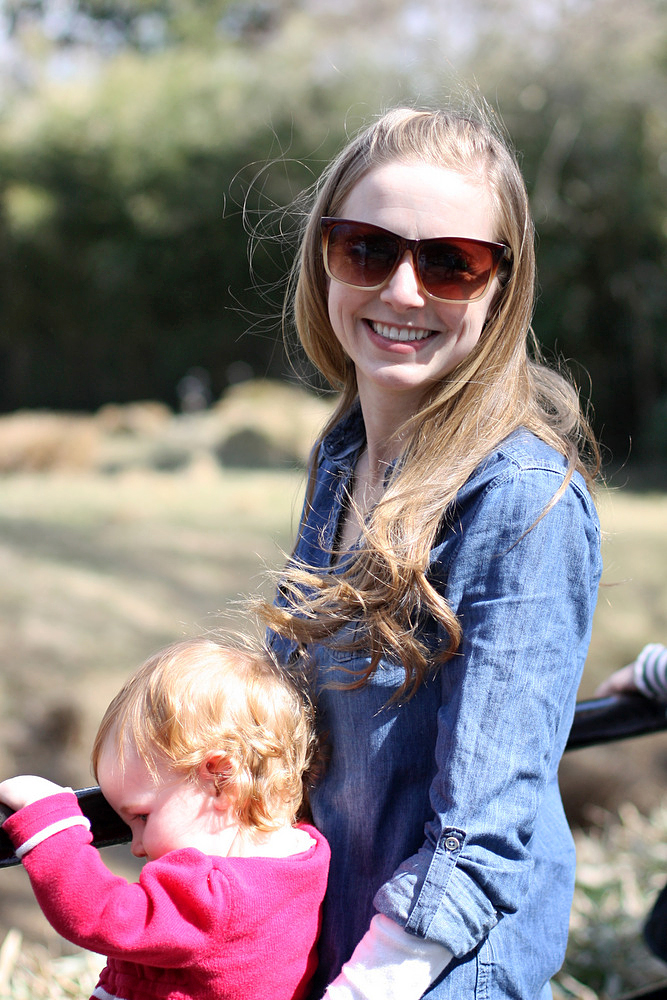 We said goodbye to my parents, tossed the babies in the back of the car and drove home. There was so much we didn’t see, and I’m dying to go back, but I suppose it’s time to sleep in our beds for a while.