I think about time a lot.

I’m a life-long clock watcher and now, with four children and two business, I’m always thinking about how much time I have.

One of the things that’s occurred to me in the past few years is that I can use time as a tool.

Since the time is going to pass anyway, I can let time work for me with no extra effort on my part or I can ignore time and then curse myself later.

Let me share a few examples of how I try to make time my servant instead of being a slave to time. 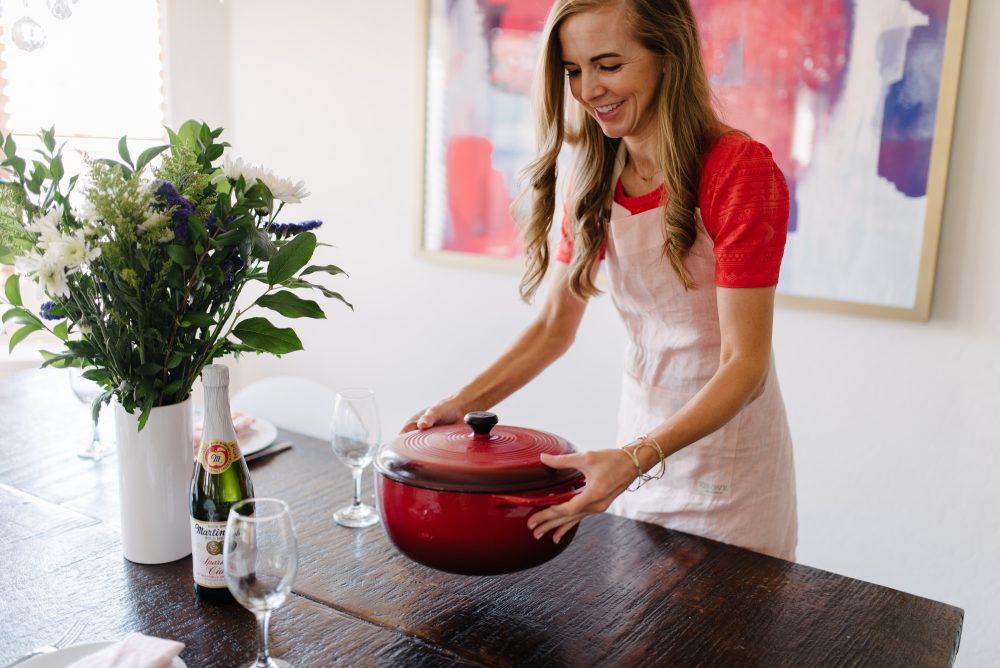 7 ways to make time work for you

Let my ingredients defrost or soften ahead of time. I cannot tell you how many times (we’re talking probably thousands) that I’ve gone to make dinner and the meat is frozen solid, so it’s basically impossible to get dinner on the table quickly. Or I want to bake something but the recipe calls for softened butter or cream cheese and mine is a small dairy rock.

It’s been especially noticeable to me since we bought our house because this house doesn’t have a microwave. We plan to add a microwave when we update the kitchen, but for now, we’re living like pioneers, and if I haven’t planned ahead, then there is no quick way for me to soften butter or defrost a chicken breast.

Then a few months ago, I realized “If I set my butter on the counter in the morning, it’s going to be perfectly soft by the time I’m ready for it and those hours are going to pass either way.”

This was kind of a lightbulb moment for me that those hours were going to tick by regardless and they could be working in my favor or against me. It took me no more time to take out a frozen item at 8 am than it did at 5 pm, but in the former case, I wasn’t spending 20 minutes berating my chicken for being rock solid.

Keep my laundry moving. Modern laundry is so convenient, which means it’s also really easy to completely forget about your washing machine down in the basement, out of sight and out of mind. On Mondays, when I do laundry, I try really hard to move the laundry as soon as I heard the signal ring.

It’s easy for me to think, “Oh, I’ll change it later” but if I take 3 minutes switch the loads, it can spend the next hour making progress without me thinking about it at all. It’s going to take the same amount of time to switch the loads either way, so I might as well do it sooner, rather than later and let that passing time make progress on my laundry.

Make a crockpot meal. I am the world’s biggest crockpot fan because it’s the ultimate example of letting time be on my side. 5 minutes in the morning saves me at least 30-45 minutes when dinner time rolls around and all day, as the hours ticked by, that time was being spent making my dinner. (P.S. I collected my 12 favorite crockpot recipes here).

Soak stained clothing. In my laundry post two weeks ago, I mentioned that I keep a bucket with stain remover in it and then toss stained items in as the week goes by. Then those days are spent working out really tough stains and I don’t have to think about it at all.

Order something early. Gift giving is NOT my strong point (ask anyone who knows me. . . ) and it’s so tempting for me to just put off ordering a gift as long as possible because it’s so challenging for me. And then it’s the night before . . . or day of. . . someone’s birthday and I’m scrambling and wishing I’d just done it a week earlier when I wouldn’t have to worry about shipping speeds.

Same for when we’re headed on a vacation. When we went to Hawaii, all the girls’ new swimsuits arrived the day we left. Except we left at 5 a.m. and the mail didn’t arrive until noon, so everyone just wore their too-small suits.

Charge my devices before they’re dead. For YEARS my phone was always dying until I finally got an extra charger and put it on my bedside table (I know, everyone says not to sleep with your phone in your room, but I have three separate alarms (I get up at different times on MWF, TTh, and Saturday) and it’s just super convenient to have it on my phone) and now my phone is 100% charged at the beginning of every day.

Letting something charge when you DON’T need it makes life so much better. Any time I charge my Kindle before it dies or my camera battery before I need it for a trip, I feel like an absolute rockstar.

I’d love to hear how you make time work for you – let me know in the comments!

If I had a dollar for every person who commented a

One thing I knew the minute we bought our new hous

Have you ever used Stitch Fix? Or do you have que

Have you heard of Junior Library Guild? It is the

Summer is JUST around the corner which means it’

Have you read this incredible book yet? It’s wo

There's nothing quite as wild as introducing a new