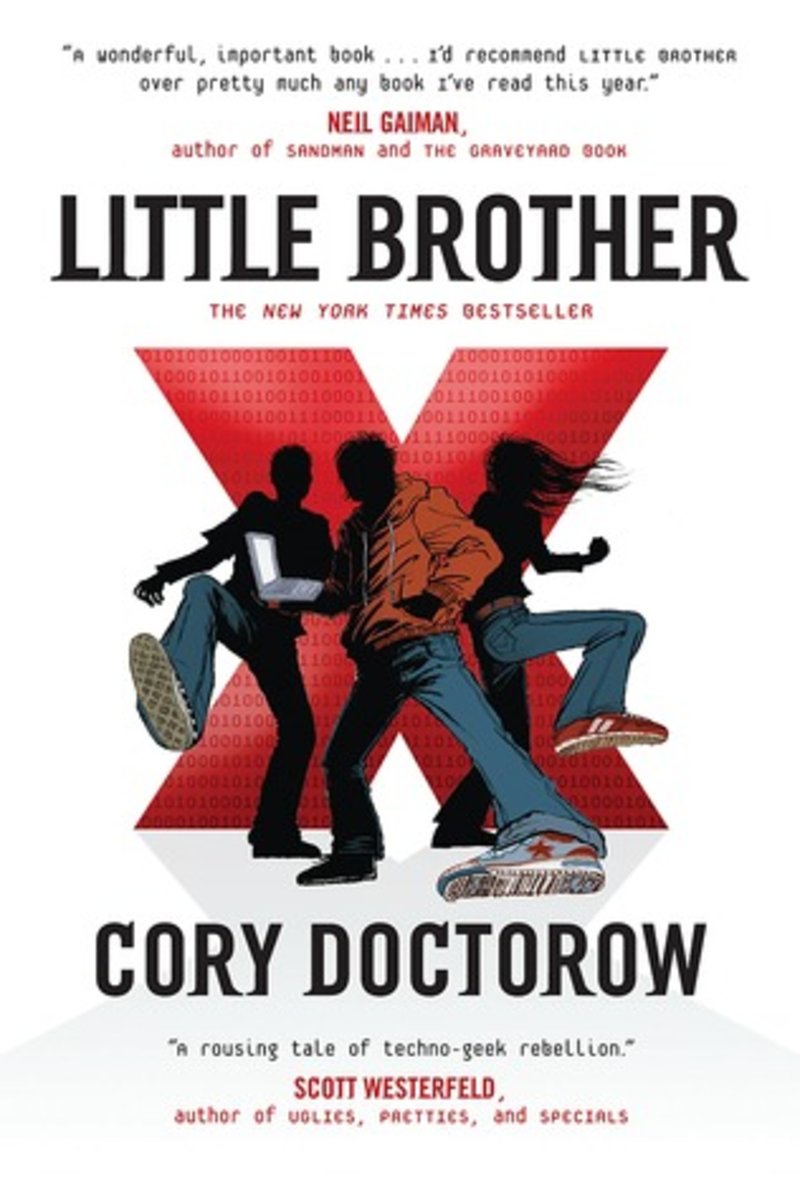 I’ve only read about eight books this year so far (and one of them was Generation Dead which I hated with all my heart and soul), so take this with a grain of salt and all that, but Little Brother is the best book I’ve read this year so far.

Marcus is a reasonably normal teenager living in San Francisco (I say “reasonably normal” because he’s more tech savvy than your average kid). He and his friends ditch school one morning to go into the city and while they are there, the Bay Bridge gets blown up by terrorists. One of the four kids gets stabbed (accidentally, it appears) and while they are trying to find help, the four of them are picked up by the Department of Homeland Security, tossed into a van, and shuttled away to an unknown location where they are separated, questioned extensively and border-line tortured until they give up all their user names and passwords and anything they could possibly know about the terrorist attack (they know nothing about the attack, but it doesn’t seem to matter).

Eventually they let them go, after warning Marcus that he’s now a “marked man” and that they’ll be watching him for the rest of his life. One toe out of line, and they’ll make him disappear. He’s understandably freaked.

When they arrive back in San Francisco, Marcus is convinced they can’t tell anyone about what happen or they’ll end up back in prison (or worse), so he lies to his parents about being detained for post-explosion quarantine and tries to go about his normal life.

Except life is so far from normal now, he can hardly believe it. After telling his parents about the “quarantine,” he goes up to his room and logs on to his computer, but the power cord keeps tripping. When he looks more closely, he sees the computer case (the hard shell) isn’t quite evenly aligned and, since he built the computer himself and has taken it apart a number of times, he knows he didn’t leave it that way. When he opens it up, he finds a tiny chip inside connected to the keyboard and the motherboard so that everything he types or looks at on his computer will be monitored. He’s rightly horrified.

Even worse, San Francisco has become a sort of police state. For instance, they force almost everyone to get a toll card by increasing the price of paying by cash by about 700% and then they put up card scanners all over the city, so that traffic patterns are monitored every moment of the day. Then, if your traffic patterns look “suspicious” you’re questioned and possibly arrested. TV monitors go up in all the classrooms. BART passes are scanned for suspicious movement.

Marcus isn’t willing to take this and he starts fighting back, setting up a special Internet (the Xnet) that provides anonymity. Suddenly his online presence – M1k3y – is famous, sort of the leader of the rebellion. Kids are emailing him about what they can do to trip up Homeland Security and he’s coming up with new and easy ways for them to do so. International reporters want to interview him (they don’t know who he really is outside of the Xnet).

And all the while, Marcus is desperately trying to stay quiet enough to keep from going back to jail or getting shipped of to Siberia. Some of his friends, including the ones that he got arrested with, don’t want to be involved, since they fear re-arrest, while other kids are ready to do whatever “M1k3y” tells them to do, including one girl named Ange, who Marcus likes for reasons beyond her willingness to fight DHS (of course there was a romance angle; of course I loved it).

There have been some reviews about how Little Brother is not a particularly well-written book, but I really didn’t care, because I found the story so absolutely fascinating. It has a great deal to say about the conflicts of security and privacy. Does giving up our privacy really make us safer (Doctorow leaves no doubt about his thoughts on this subject)?

It asked the kinds of questions I’ve asked myself a hundred times – would I fight back against things that are wrong, even if it was dangerous, or would I submit out of fear? Should liberty be curtailed in dangerous times? I like that Marcus isn’t some hero-kid who is completely fearless. He’s as terrified as I think any of us would be.

Little Brother by Cory Doctorow also talks at length about different sorts of technology. Some reviewers found it to be distracting from the overall story line or just felt like it was over their head, but I absolutely loved learning about how they pulled some of the stunts they did, or how encryption really works, or how the law of false positives makes it necessary to search 200,000 people to catch one or two terrorists. (I think I would have been more likely to skim those sections if I’d been reading, rather than listening on CD, but I found them fascinating to listen to). I really truly don’t think you have to be any kind of tech-nerd to enjoy the total coolness of this book.

So yes, I started listening to it on CD (the audio version is very well done) and got about half way through, but was so gripped that I ended up reading the last part online (the whole book has been published online by the author).

One other small thing I loved about Little Brother was the many references to various locations and landmarks in San Francisco. Having just been there this summer, it was fun to know exactly where he was and what those streets looked like.

Anyway, I loved this book by Cory Doctorow- it just worked perfectly for me. There’s some swearing and a few mentions of sex, but nothing that detracted from the overall story for me as a reader. I loved every single page.

If you liked this review of little brother by cory doctorow, you might also like these books: