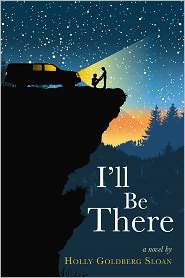 Sometimes, when I’m doing a tremendous amount of reading, I start to feel like every book is the same (like the fact that in the last two months I unintentionally read five books dealing with teen pregnancy).

So, when a book is completely different from other books I’ve read and pulls me in with excellent characters. . . well, I’m sold.

I’ll Be There is really about the characters and Holly Goldberg Sloan did such a fantastic job at building them. You’ve got your main characters, but there also some sections that explore, even if only for a paragraph or two, characters that most books wouldn’t even bother with. You find out what the motel’s cleaning lady is thinking, why the biker doing an early morning solo ride is worried about the character he meets up with, what the ER doctor thinks about his co-workers, and on and on.

It could be confusing, but it works seamlessly with the story and it enriches the world of the book more than I can say. It feels like a real community, full of real people. I loved every second of it.

I’ll Be There by Holly Goldberg Sloan

Sam and Riddle are brothers – their father took them away from their mother some ten years earlier and they’ve been on the run ever since. They’ll settle down for a few months until the dad’s petty (and occasionally not so petty) crimes get too close to catching up with him and then they’ll be off – gone to a new town. They never attend school and the boys have pretty much learned to fend for themselves.

Sam spends most of his time looking after Riddle who, it appears, is somewhat mentally slow. He doesn’t talk and seems to live in his own little world. What he does know, though, is that sticking with Sam is the most important thing.

And then, in one town they take up residence in, Sam wanders into church (he likes attending various churches in the different towns they’ve lived in, although he hangs back, coming late and leaving early, mainly just enjoying the music). In this church, Emily is singing a solo. She has virtually no musical talent and she’s so nervous after her solo that she runs outside and throws up. Sam follows her out and is quite nice to her and she’s taken by his kindness and, lets be honest, his good looks.

But over the next few days, she can’t find any sign of him – he doesn’t appear to go to their school and no one else knows who he is. And then, quite accident, they meet again and a little romance is sparked.

It doesn’t take Emily long to realize he’s hiding something, although she’s not sure what. He claims to be homeschooled and his mother clearly isn’t in the picture and he’s reluctant to talk about his father. And there is the little brother.

Before long, worried about this new relationship, Emily’s family gets involved and they don’t know quite what to make of these brothers either.

You can bet that Sam’s dangerous father notices that something is going on too, and his intentions are far less pure than Emily’s parents are.

It’s hard to do this Holly Goldberg Sloan book justice because there is a lot going on, but it’s so well-conceived that it’s easy to follow the plot and the many characters. And I couldn’t quite tell where it was going to go, which I found delightful.

Occasionally, I cynically think that books that are really “all about the characters” means that the plot itself is kind of non-existent, but I’ll Be There had a lot of adventure – I could see this appealing to guys as well (although, with the romance angle, it’s probably more likely to be a girl book).

The pacing is interesting, because the set up made me think most of it would be about the relationship, but less than halfway through the book, things took a turn I hadn’t really expected and the second half of the book was completely different from what I might have predicted.

There was one character that I felt went a little off the rails toward the end – his plot line just became too ludicrous, which was unfortunate.

But other than that? I”ll Be There was an astoundingly enjoyable read.

If you liked this review of I’ll Be There by Holly Goldberg Sloan, you might also like these books: