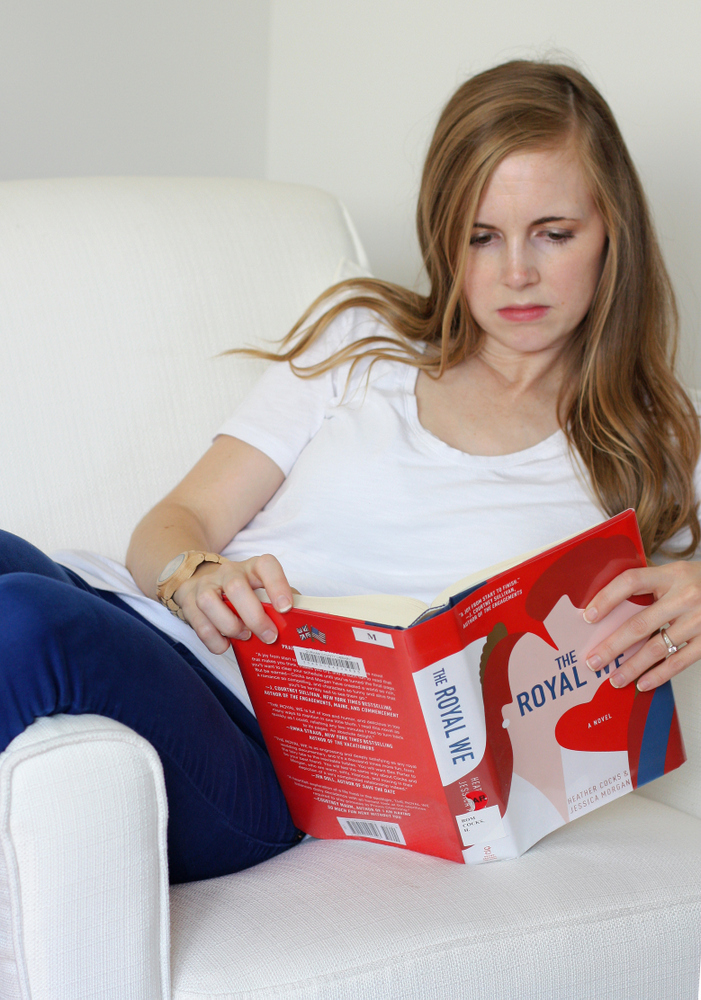 This month’s book for Tell Me What to Read was The Royal We, and the one I was secretly most excited about.

Four separate people mentioned this one when I asked for recommendations, and when it also appeared on Modern Mrs. Darcy’s summer reading guide, I didn’t need any more encouragement to pick up The Royal We.

I’m not really a celebrity follower, but I’ll admit to a soft spot in my heart for the royal family. I’ve heard this book called Kate Middleton fan fiction, which led me to believe it’d be a slightly fictionalized version of Prince William and Kate’s courtship, but this is a pretty different version.

You’ve got the non-royalty girl and the older of the two princes, with an unpopular father and an aging Queen, plus all the paparazzi circus, but the similarities seem to end there.

the royal we by heather cocks and jessica morgan

In this version, the girl in question is Bex Porter, an American exchange student who comes to Oxford for a semester and ends up living in the same building as Prince Nicholas of Wales. She meets Nick when she first arrives and he takes her luggage to her room, but doesn’t recognize him and is horrified later to discover it was him because of a joke she made about the British Monarchy when they passed a bunch of portraits of past kings and queens.

At first, she doesn’t see much of him – he’s fairly private and often gone, and she’s engaged in her own studies, but when she bumps into him on a morning run a month or two after arriving, they strike up a friendship. He’s more at ease with her than with most people because she’s an American and thus not his future subject, which takes a lot of pressure of him. They begin hanging out, watching terrible television shows together and eating US junk food.

Eventually their relationship takes a turn for the romantic and that’s when things really get complicated. For several years, they keep it secret, which starts to wear on Bex – three years is a long time to not have met the family or have your boyfriend even acknowledge you in public.

And then when it does come out, there’s the media frenzy which just about kills Nick. Things are also tricky due to Bex’s twin sister who is obsessed with the idea of being related to the royal family and not particularly interested in anything remotely like discretion. And Nick puts a lot of pressure on Bex to keep her twin under control.

Then come the problems of making an American girl into future queen material which makes Bex feel like she’s become a shell of her real self, and it’s pretty clear that most of the royal family isn’t wild about her, polished version or not. And, like any person who becomes a celebrity of any level, there’s the part that looks amazing and fun, and the part of being famous that is a complete drag, like everyone wanting something from you and not being able to go to the grocery store for a gallon of milk.

The Royal We starts the day before the wedding and then moves backward eight years to when they first meet, which means that there is the looming question throughout the book of whether or not the wedding is actually going to go through and also why is the status of the wedding even in question?

It’s just hard not to really like Nick and Bex; they’re both delightful and sometimes so unbelievably irritating and sometimes wise and sometimes complete idiots. Their character development is really fun, I think. I also really loved Bex’s dad and Nick’s younger brother Freddie – if they’d been the only four characters in the book, I could have been perfectly happy.

What really makes this book is the hilarious writing. There is just one funny line after another and Nick and Bex and Bex’s father are particularly witty. But there isn’t that feeling of “the writer was really trying to be funny” here, and I definitely appreciated that. As soon as I finished the book, I went back to read all the amusing bits again. Which ended up being a good half of the book.

A few people mentioned that it could have been edited down a good 50-100 pages, and I almost never agree with those kinds of statements because if I like a book, I want it as long as possible. But this book? Yeah. It could have used a trim. For me, the problem was that there is a pretty lengthy list of supporting characters and so much space about many of them that I didn’t find all that compelling. I would have preferred the story to have stuck to Nick and Bex and their families. But, surprisingly, no one asked me for my opinion during the editing phase (or at any phase, for that matter).

Let the record state that this is definitely an adult chick-lit novel. I’d say it’s a step further than Sophie Kinsella or Liane Moriarty, so if you find those books too much for you, I wouldn’t recommend this. I didn’t think it was over the top, but there is definitely some swearing and sex (and holy so much drinking, which I don’t find offensive, but I did fear for some livers there).

All in all, this was just a really fun summer read, and it was hard for me to pull myself away to be social at a family reunion last weekend.