Now you’re all wishing you hadn’t said nice things last week when I posted an outfit photo. Because I clearly took it to mean you wanted more outfits.

Also, can I mention how much better it is getting dressed when you aren’t pregnant? (1000000x better. Plus 10). I am saving an average of fifty minutes a day that I was previously spending pulling my pants back up.

Mainly, I am super happy to have more than two pairs of pants to wear. By the time Ani was one month old, I’d already bought four new pairs of pants – clearly, I had gone through pants withdrawal.

Shirt: Old Navy, Pants: Old Navy,
Shoes: Payless, Disco Hairclip: Made by Me
And after a week of warm warm weather, I put away allllllll my winter clothing (and some non-maternity clothing that I’d worn throughout my pregnancy but just couldn’t bear to wear anymore) and then it turned all cold again (well. . . cold in my world, which means it was highs of 59) and this was pretty much the only long-sleeve shirt I had available.
Also, when I went to upload that picture above, this is the picture that was next to it in the folder: 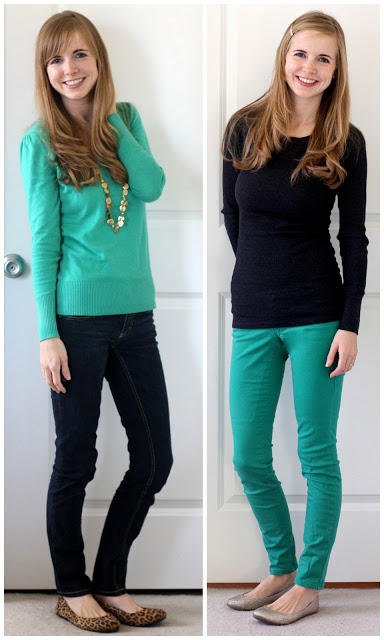 Am I the only one who thinks that’s awesome?
I don’t know why they ended up next to each other, since the one on the left is from last February, but it kind of made my day (clearly, it doesn’t take too much to thrill me – but then, after last week, any day that doesn’t involve me cleaning up someone else’s vomit in the middle of the night is a red-letter day for me. Ella made it 2.5 years without ever getting more than the sniffles, but I knew our luck couldn’t hold forever).
And now I’m missing my bangs a little bit.
2 shares

Previous Post: « Half a Dozen Recipes Worth Making
Next Post: A Reading Recap: What I Read in the First Quarter »