When we bought this house, the area that’s now the piano nook was actually part of our bedroom.

Because of an addition to the house some 30+ years ago, many of the rooms were double long and our bedroom was one of those.

We didn’t feel like we needed an enormous bedroom (even cutting it in half, it was still a bit bigger than our bedroom in our last house) and we wanted more living space instead.

Our original plan was to close it in on the bedroom side and then open up the other half to the living room and have it be my office.

But then Bart came over to the house the day they’d taken the wall down and he LOVED how open it was in the living room and the idea of closing it up and having it be my office, suddenly seemed like a bad idea.

And so we ended up with half our bedroom now as part of the living room.

When we moved in, we loved how open it looked, but it was a little tricky to turn into useable space.

The first things were the built-in bookshelves.

There was a ceiling beam between the old and new halves of our bedroom that couldn’t be removed, so when we closed it in, there was a pop-in space that didn’t go quite up the ceiling. Our original plan was to build custom bookshelves into that space but when we got the quote back from the cabinet maker, it was about 6 thousand dollars. . . definitely more than we were willing to spend.

Our contractor suggested that the space was just about right for IKEA bookshelves and that if we bought those, he and our carpenter could trim it in so it looked permanent.

And it would cost about $600 total (including the cost of the bookshelves).

I bought two of these wood/white Hemnes bookshelves from IKEA and came over to the house before we moved in and assembled them. Sure enough, they fit almost perfectly, with 1-2 inches of extra space on the top and sides.

A few days later, we came back and they’d trimmed them in perfectly – you’d never know they weren’t built in! 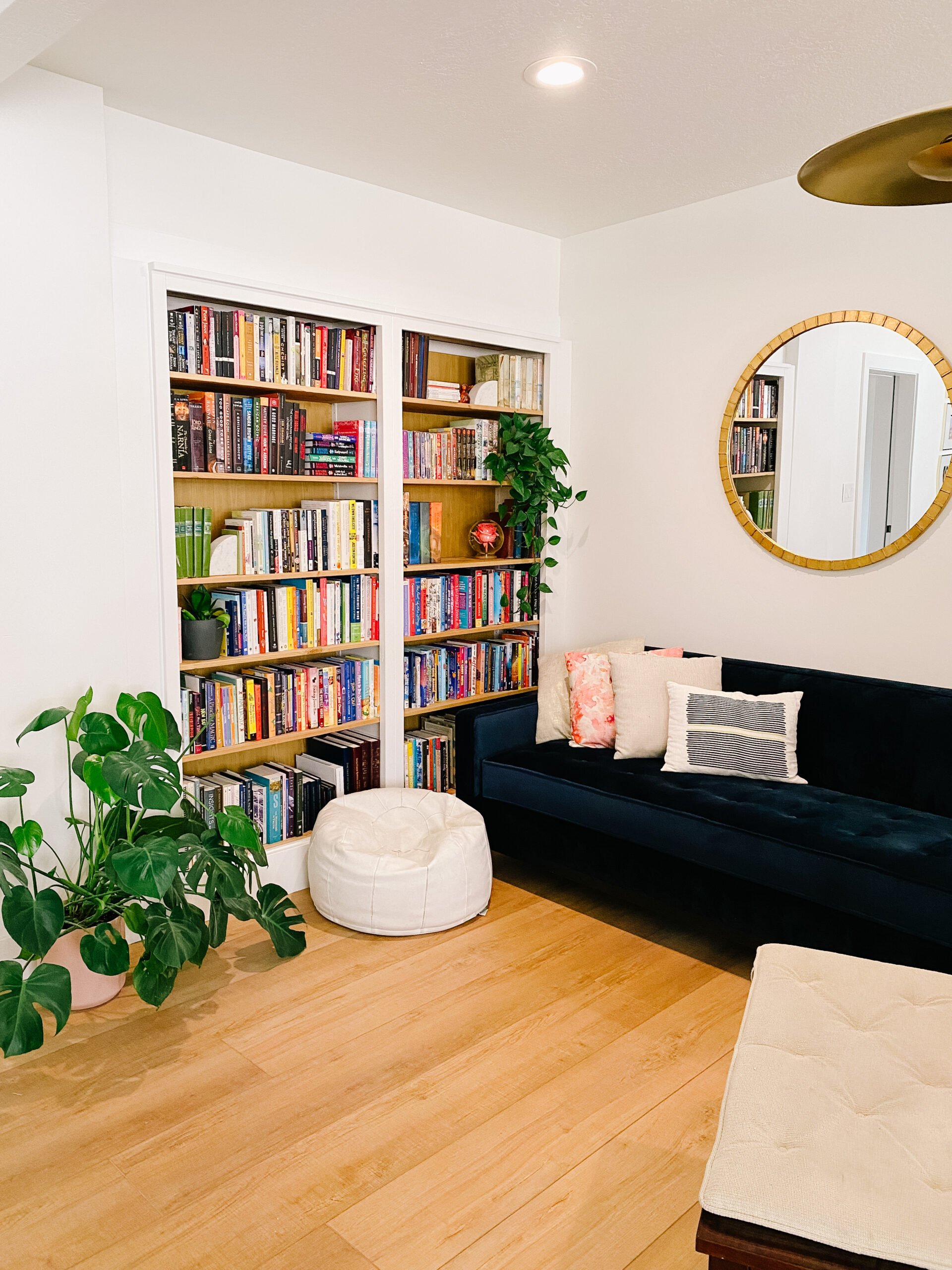 It was a delight when we moved in to have so many shelves ready to go, since we had boxes and boxes of books to unpack. 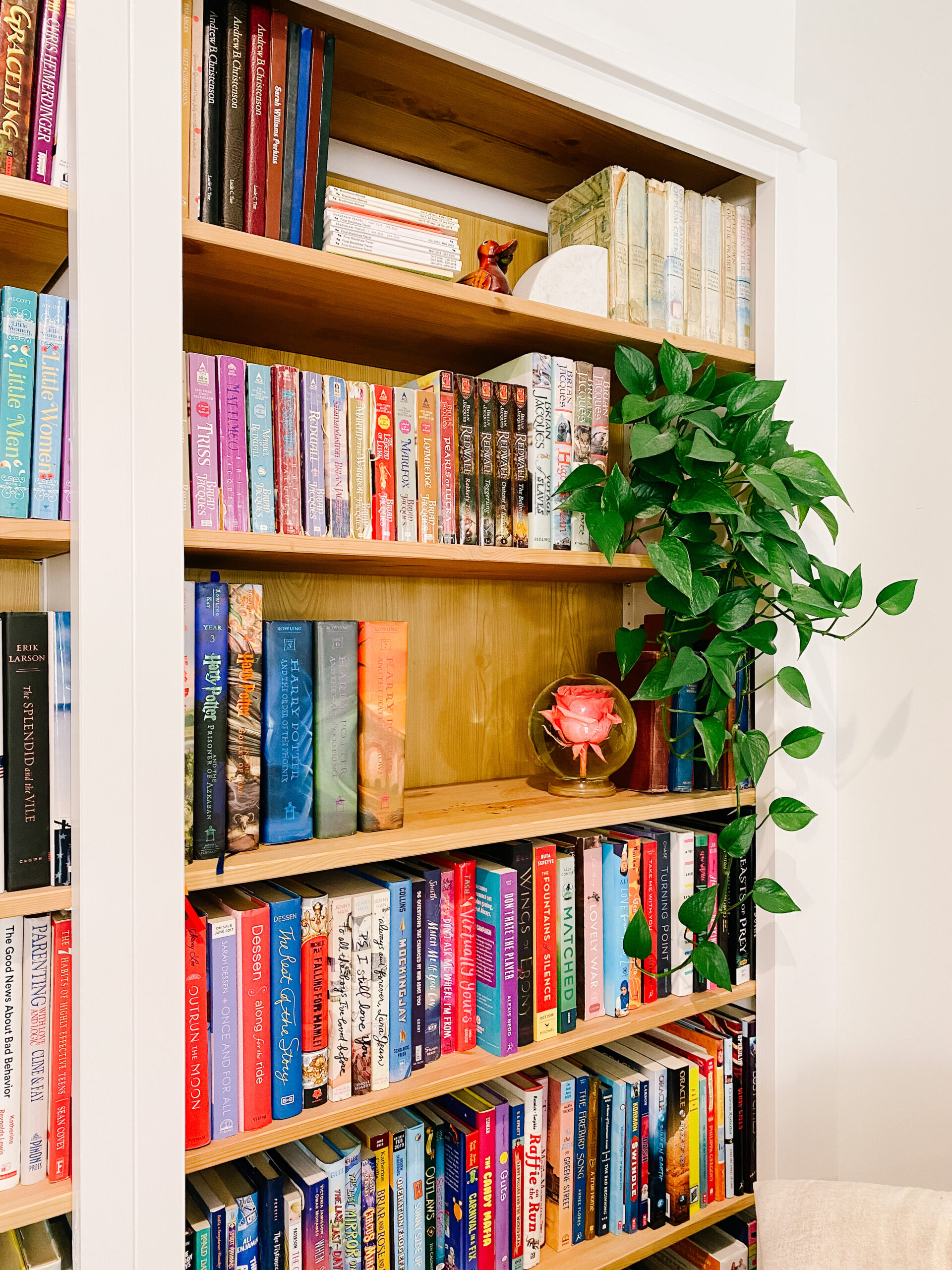 For a few weeks, our main beloved blue sectional sat in this space while we tried to figure out what to do with the space and then we got an email from a family in the neighborhood saying they were selling their piano.

Bart grew up playing the piano (actually, so did I but I have lost 99% of my abilities at this point) and getting a piano had been on our radar for the previous year or so, but they’d all been crazy expensive and our last house didn’t have a great spot for one. 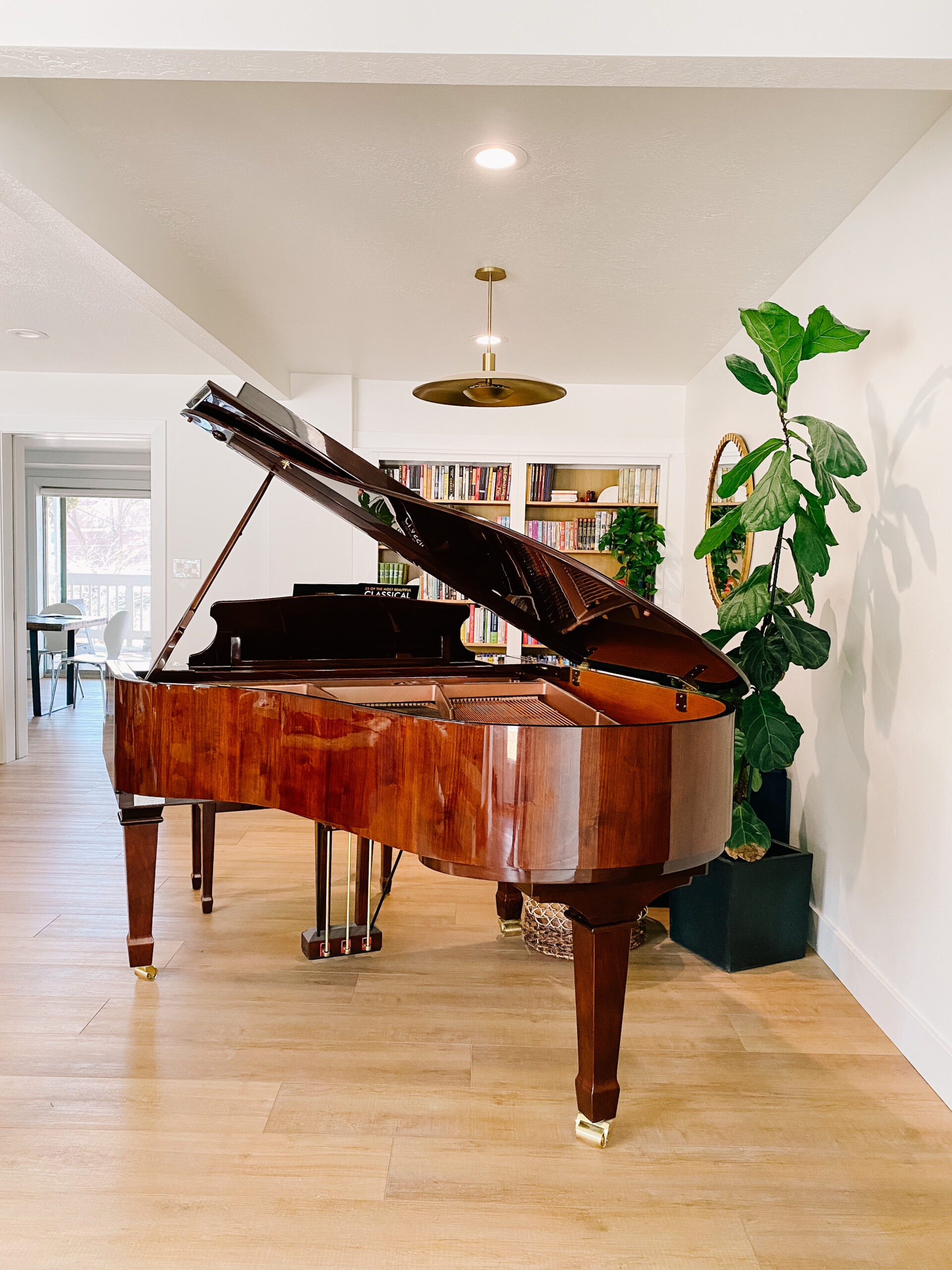 This piano, though, was pretty affordable and in fantastic condition (they’d bought it some 15 years earlier when a local performing arts center was selling off a bunch of their performance pianos) and we bought it.

This nook was the PERFECT place for it and it fit like the space had been designed for it. 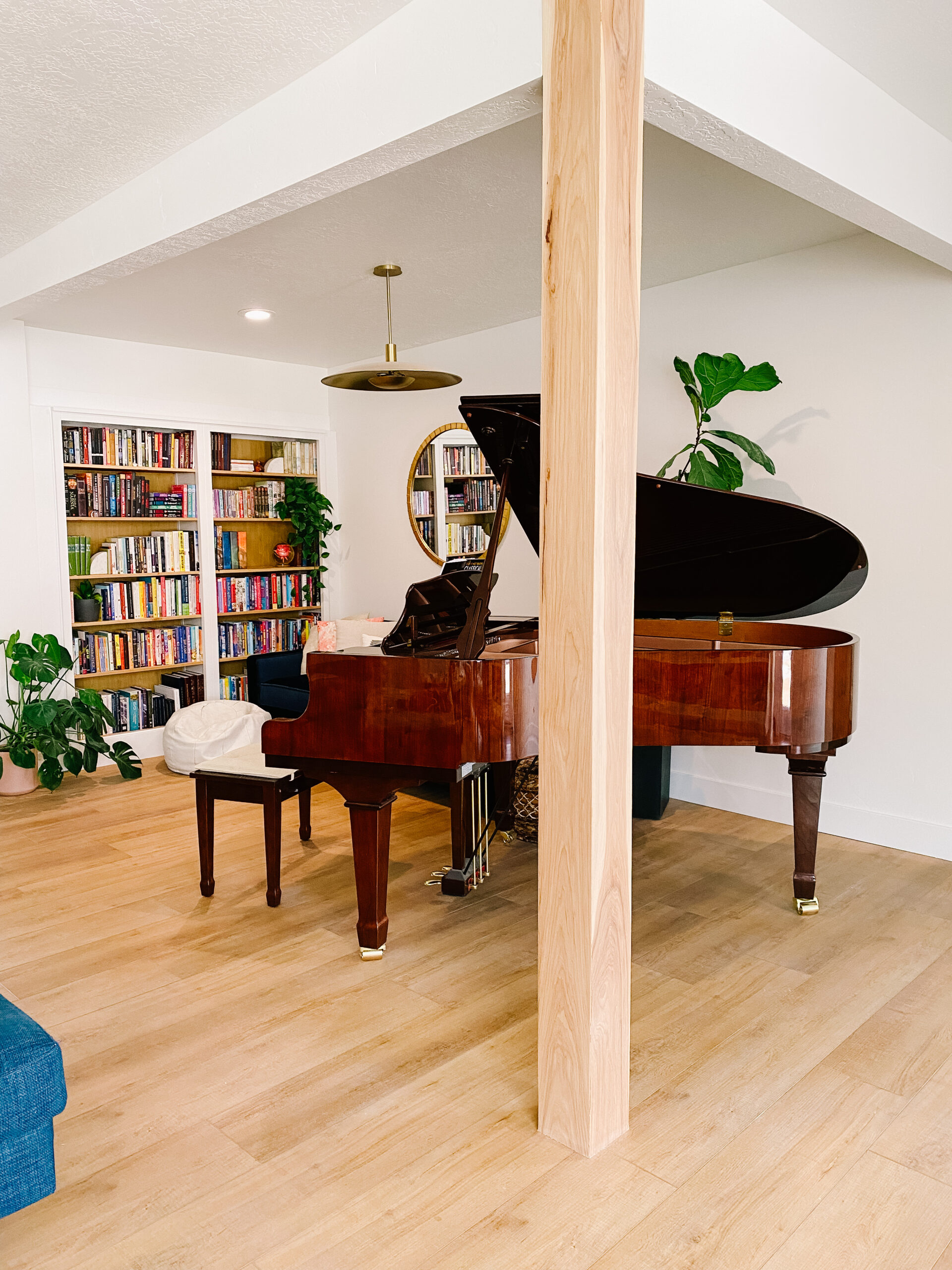 A few weeks later, the blue velvet couch we’d ordered from Apt2B arrived. Our plan had been for it to be the main couch and for the blue sectional to go down to the basement, but when it arrived, it just felt a bit too small and low for the main space.

I suggested we tuck it between the piano and the bookshelves and I immediately LOVED it. 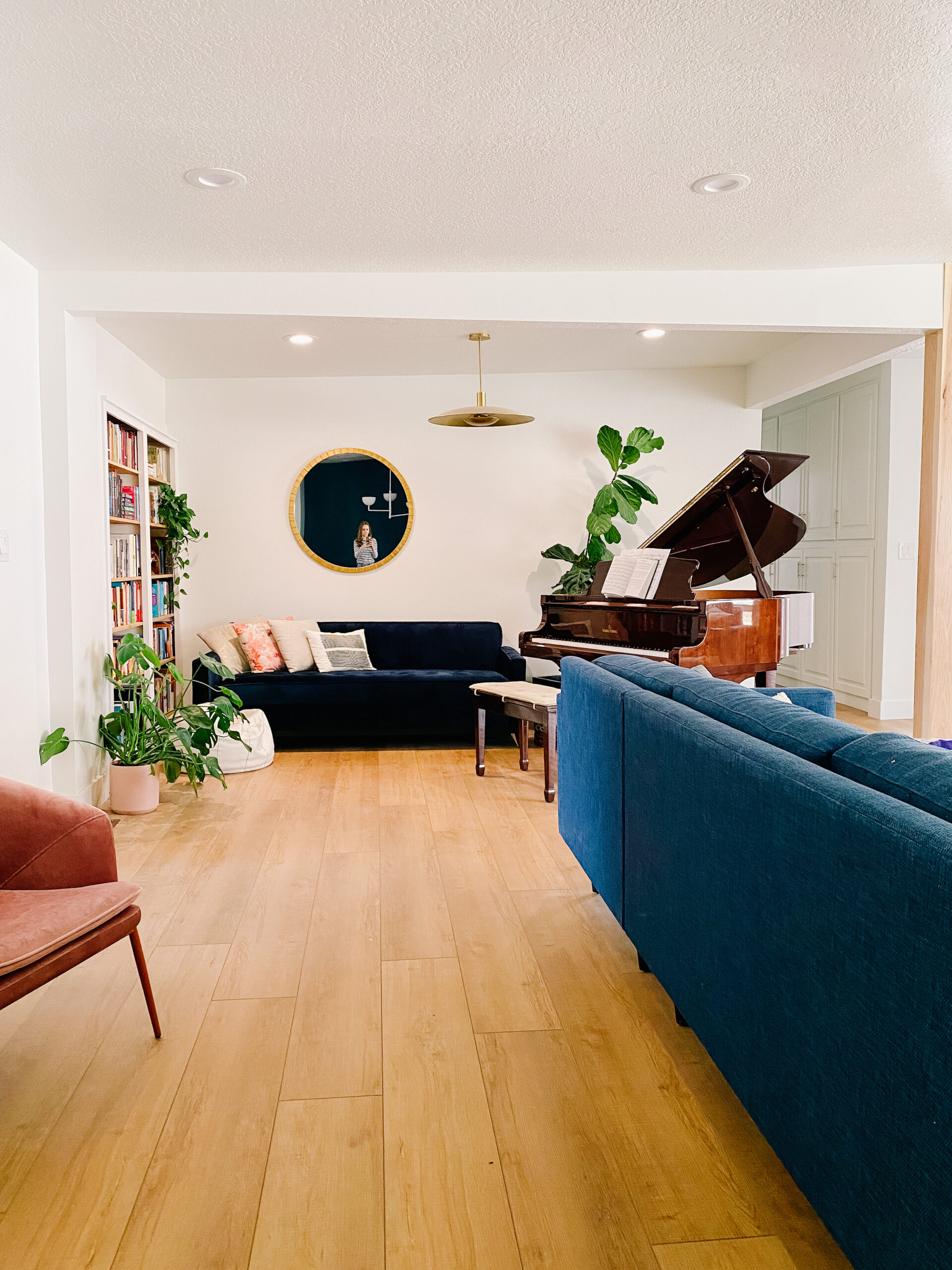 A few days earlier, my uncle and grandmother had come for dinner and when my uncle was playing the piano after dinner, there was no spot for my 90 year old grandmother to sit and listen – she’d ended up leaning against the arm of the blue sectional which didn’t feel ideal at all.

The blue velvet couch fit perfectly in our piano room and was the perfect place to sit and listen to someone play or grab a book from the bookshelves and snuggle up to read (it’s currently Tally’s top place to sit and read).

It created a cozy little nook where you were still in the main area but had a little bit of seclusion.

When Melissa from Rye Interiors came over, she suggested we hang a mirror above the couch to give a little more light to the space, since it can be a bit dark in that corner and it made the piano room space look more finished without adding more busyness (since the bookshelves already have a lot going on). 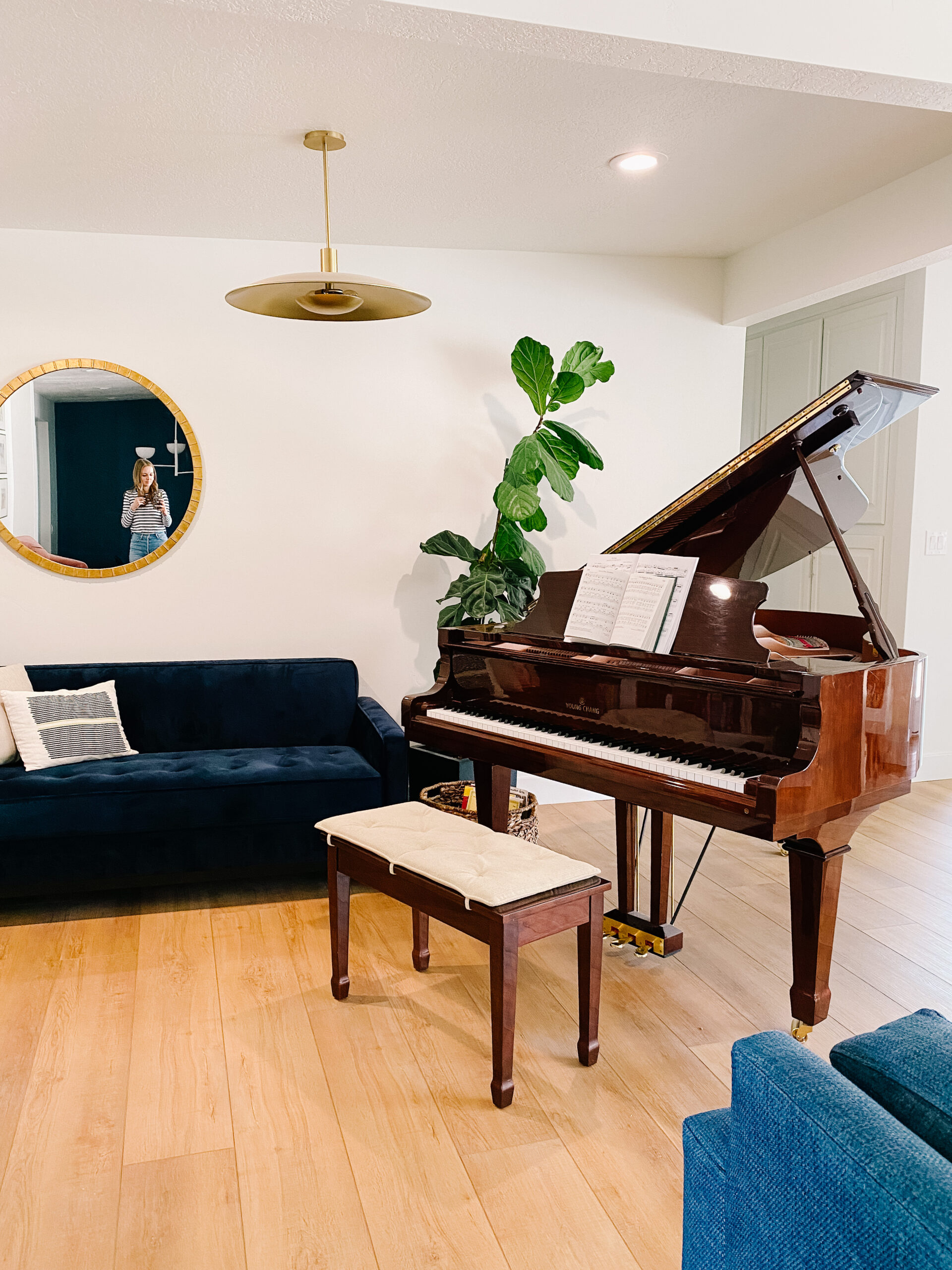 I couldn’t be happier with how this piano room area has turned out and it’s been the perfect use of the space.

And I’m even relearning a few piano pieces!