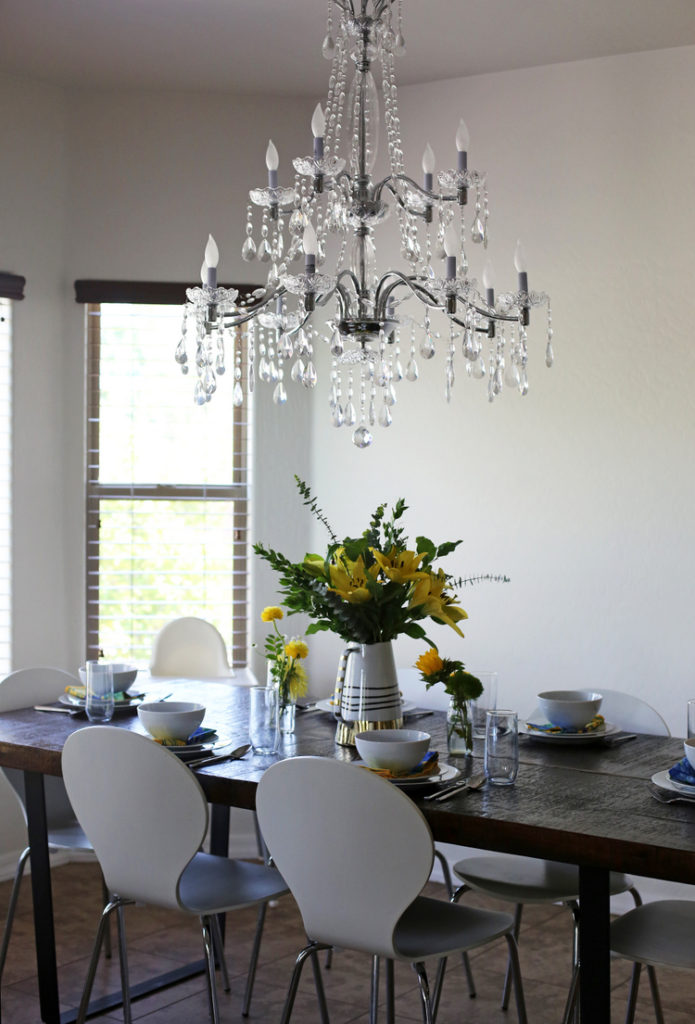 Decorating this house has been an extremely slow process for several reasons.

One is that there were/are some major elements of the house that need re-doing, such as the tan paint on every available surface and some really interesting flooring choices, such as green carpet over 75% of the house.

Two is that it takes us forever to decide on what we really want.

Back in February, Bart and I finally pulled our lives together enough to paint the kitchen.

Switching to white walls made a huge difference in lighting up the room and making the wood blinds and brown tile pop. Those previous owners really really liked beige and brown, apparently (although when we were repainting, we discovered that UNDER the tan paint was a pretty dark brown paint, so I can only imagine how cave-like the original owners’ home was).

Prior to painting, we’d replaced our kitchen table.

The table we originally had in here was one we bought for $40 at Goodwill in Durham before we even went to our new house. All our old furniture was in our previous Durham house being rented out, and we knew we needed somewhere to eat ASAP. It was the only table at Goodwill, and it fit in our car, so we plunked down our 2 $20s and went on our merry way to a dark, empty house.

I wasn’t even looking for a table but I stopped in at Downeast Home for something else and happened to see, in the clearance section, three table tops lined up against the wall.

They were all on CRAZY sale because none of them had any legs. Bart was out of the state for work, but I sent him a bunch of texts and photos and we agreed that for a solid wood tabletop that sat eight, $200 was a steal (the original table had it included legs was apparently $1400).

I also had a “welcome to the neighborhood” coupon for 10% off, so with taxes and everything, the table top came in at around $190 (this post isn’t really about the table. But I can’t stop typing so many more details about this table than you’d ever ever ever want to know).

We ordered some table legs on Etsy and (6 weeks later when we finally got around to borrowing our neighbor’s high-power drill) voila! Beautiful new table. 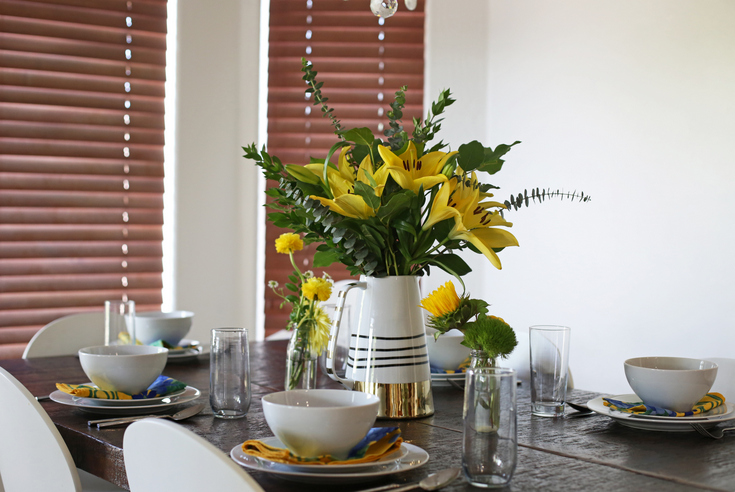 It made the biggest difference in our room to have a table that fit, plus a color that wasn’t that 90s orange oak (that table is now in our dining room, because if there’s anything better than a kitchen with an ugly table, it’s seeing that table the moment you walk through the front door. Bonus points if your children have left 10 tubs of play-doh on it).

But now with a big table, the chandelier, which we hadn’t even liked to begin with, now looked even worse above the table. 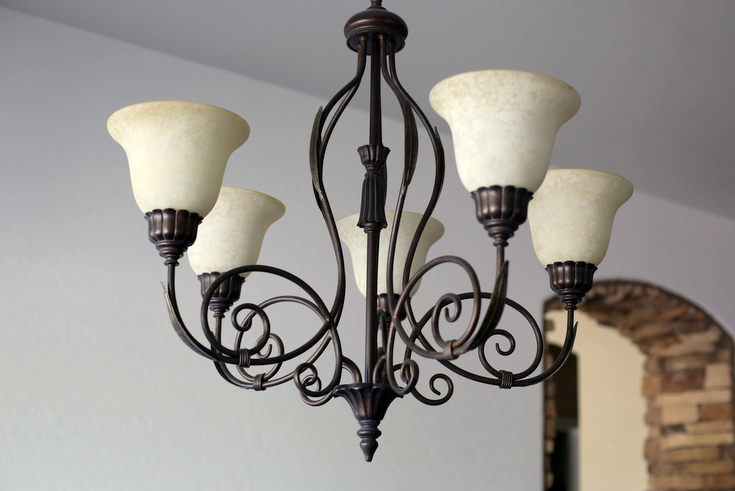 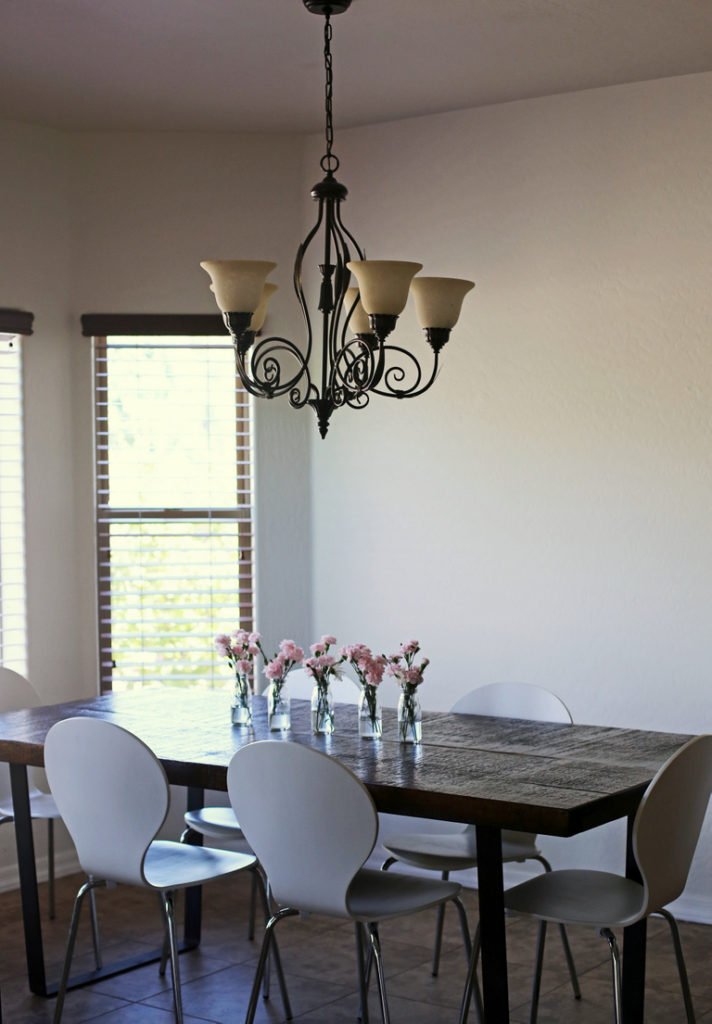 I knew I wanted something that would finish off the room and make the area seem complete.

Also because the breakfast nook is just part of the kitchen and family room, it’s a big open space that needed something large to anchor the table and chairs.

I’d worked with Lamps Plus before when we lived in North Carolina, so they were the first place I turned to find a chandelier.

Bart and I spent several nights combing through their website and considered a ton of options.

I was definitely swayed by some of the mid-century modern choices, since I love that look, plus they’re super popular right now.

But eventually, we opted for something more classic, plus a crystal chandelier gave us the right balance between something large but also light and bright to keep the space feeling open. 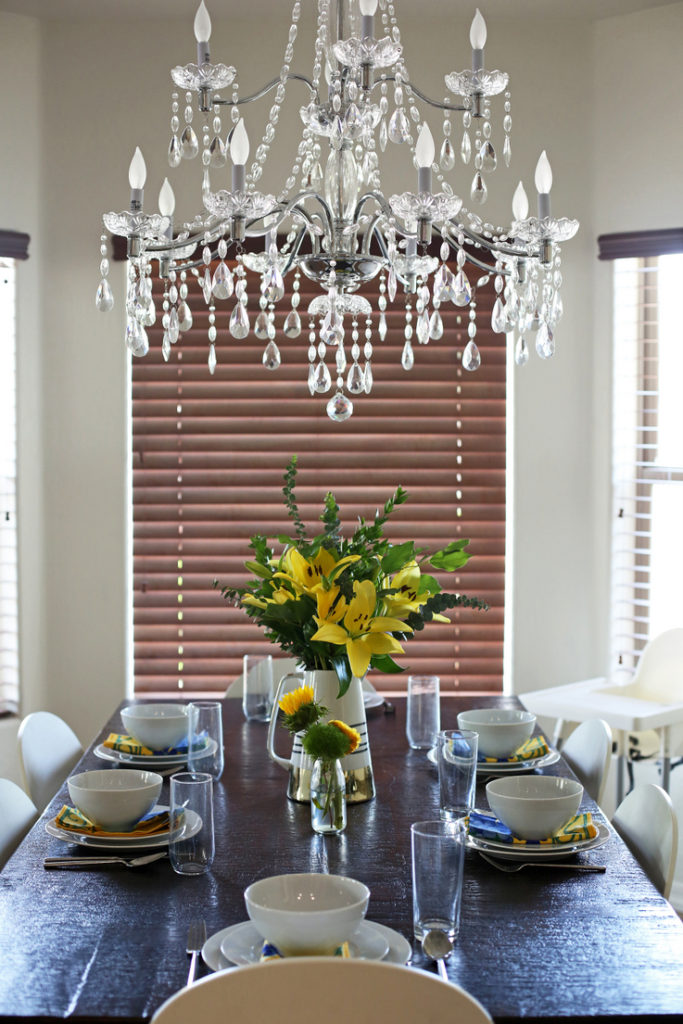 The day it showed up was basically like Christmas.

That afternoon, the girls and I assembled the entire thing and then it sat in my office for several weeks (my poor office – the holding ground for everything without a home in our entire house. Currently the OLD chandelier is sitting here).

Finally, one Friday night, when we were planning the next day, Bart said, “I think I’m ready to tackle installing the new light.”

Between the two of us, we’d installed exactly no lights, but after the girls were all down for naps and quiet time, we shut off the power (feeling glad it was April and not July), unscrewed the bolts for the old chandelier, disconnected the wires and then hung the new chandelier. 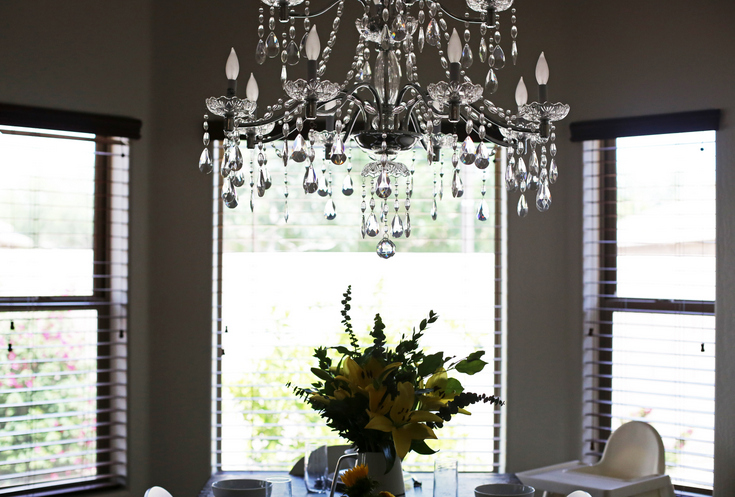 Since we had zero experience, there was definitely some holding of breath when we turned back on the power but miraculously, the new light worked perfectly. Of course, it looked stupid because we had big industrial spiral bulbs, but after a quick trip to the store to buy chandelier bulbs, it looked gorgeous. 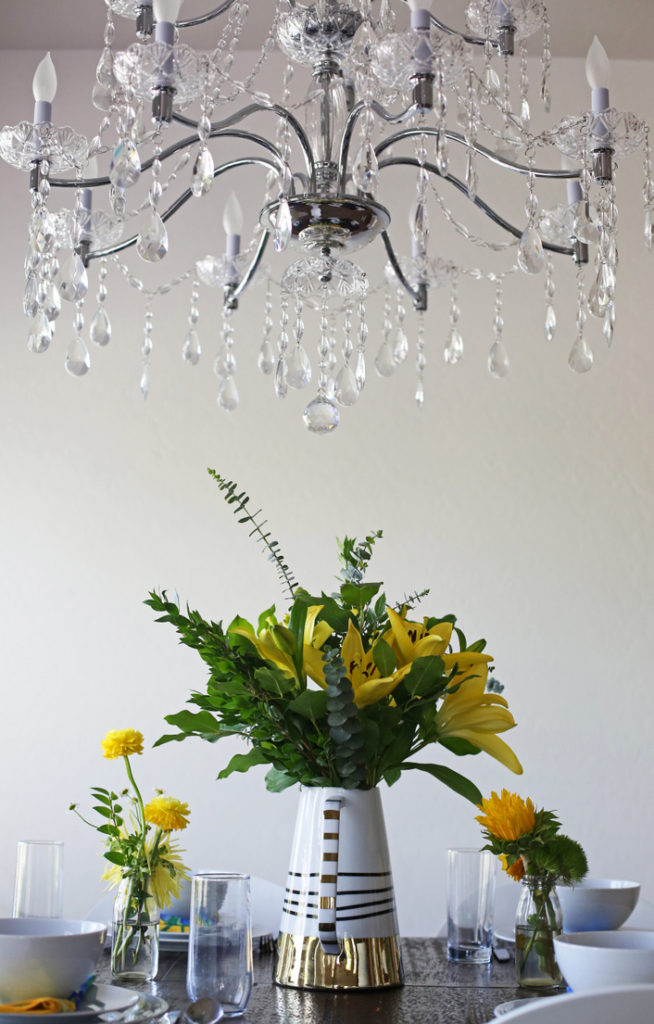 The girls were beside themselves when they got up and didn’t stop commenting on it for days, and I am completely in love with it myself.

Every meal seems a little more festive and the whole area doesn’t have the empty feeling it’s had before.

It’s even helping overshadow the parts of the space that are still making me a little bit crazy (for instance, the mismatched kitchen countertops, and the very bare family room).

Who knew one light fixture could make such a huge difference? 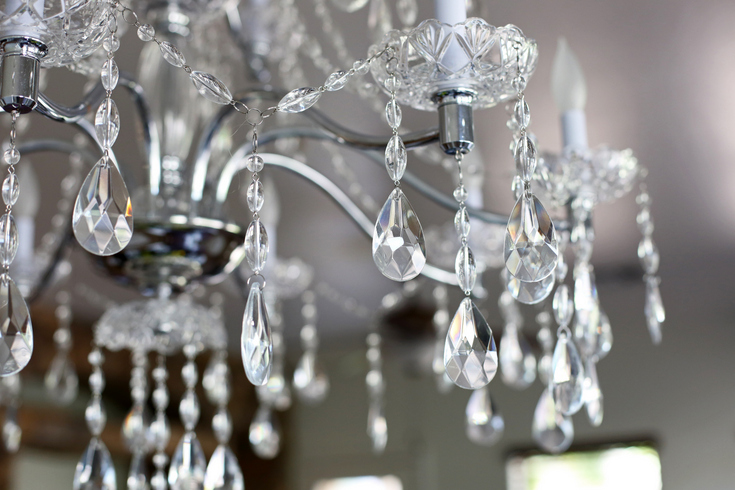 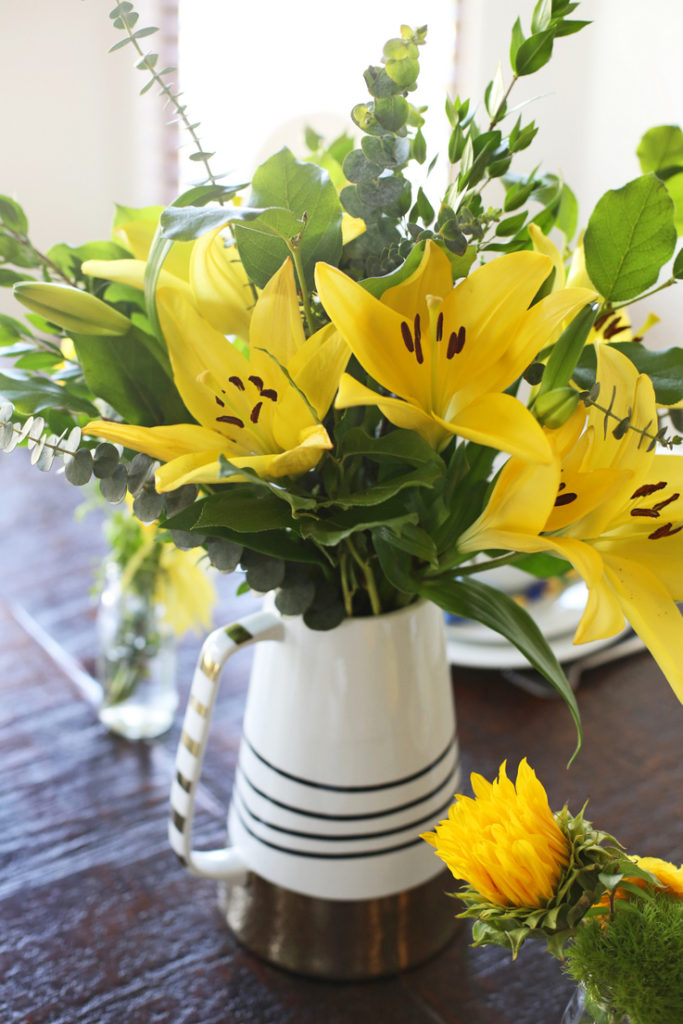