The House of the Scorpion by Nancy Farmer is incredibly good – tight story, excellent plot development, and really great characters. The story follows a clone, Matt is the only clone who hasn’t had his brain destroyed and he must figure out if he’s destined for greatness or to be simply an organ bank for his maker. The House of the Scorpion doesn’t feel like what I think of as science fiction, but it definitely deserved every award that’s plastered on the cover. Highly recommended. 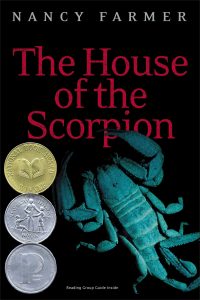 The House of the Scorpion Summary

Matt is a clone. The original DNA holder is a man named El Patron and he’s the dictator of a land called Opium. One hundred years earlier (approximately our time, since this book is set 100 years in the future), El Patron had approached the US and Mexican governments and explained to them that they had two problems. The first was that they couldn’t control their borders – people were illegally entering both countries and the government was pretty helpless to stop it – and the second was the drug trade along the borders was becoming increasingly worse. El Patron and a group of allies offered a proposal: if the US and Mexico would both donate the land along their borders and let El Patron establish it as his own country, they would keep all the citizens in their own lands and also start selling all drugs to Asia and Europe, keeping it and the accompanying problems out of Mexico and the US.

Shockingly, the US and Mexico agreed and Opium was born. Anyone who tried to escape through Opium to the other country was fitted with an obedience chip, which made them incapable of making their own decisions. If they don’t hear the orders to drink water, they’ll keep working until they collapse (or die) of thirst.

Clones are, perhaps, even worse off. It’s legal to have a clone or many clones, but the law states that they must be injected with brain-destroying substances at the moment of “harvest.” But Matt’s maker, El Patron, is powerful enough to circle the law and Matt’s brain remains intact. He is raised in a little cabin on El Patron’s plantation until he is about five or six and then he’s taken to the big house where he slowly realizes he’s a clone and that, worse, nearly everyone appears to hate clones, considering them less than an animal, for reasons he can’t divine since he can’t see any noticeable differences between himself and the humans.

And then Matt realizes that all the other clones have their brains destroyed and that he alone is still capable of thinking and reasoning. He’s actually quite bright and he’s given lessons ranging from math to Latin, instruction in how the plantation is run, and music lessons when his gift for instruments is discovered. It would seem that he’s being groomed to take over for El Patron when he finally dies (he’s currently 147 or so). After all, no one would spend so much effort on a clone just to hack them open and grab a liver when the original El Patron gets ill, would they? Matt doesn’t know and he’s afraid to find out the truth. He loves El Patron – feels a kinship with him (obviously) – but also recognizes that El Patron can be cruel and selfish.

The story isn’t particularly high action, but it certainly has a snappy pace and the story unravels at the just right speed. I really had no idea where the story was going to go, but I was satisfied with the direction it took.

There were certainly a lot of messages you could take away from the book – acceptance, racism, cloning, family relationships, trust, the dangers of wealth, etc – but none of them felt heavy-handed or got in the way of a really excellent story.

I heard about this book first in my children’s literature class (this is really a young adult book) and in the three months between hearing of it and finally reading it, I stumbled upon this title dozens of times. It was suddenly everywhere (I suppose that’s what you should expect from a National Book Award Winner).

And it was worth all the hype. I would definitely recommend this book – I liked it far more than I expected.

Is there a sequel to The House of the Scorpion book?

And what about a The House of the Scorpion movie?

Nancy Farmer’s book The House of the Scorpion HAS been optioned (which means someone buys the rights to shop it around to film companies) but so far has not been picked up by a film company.

Looking for other Nancy Farmer books?

Nancy Farmer has also written The Eye, the Ear, and the Arm, A Girl Named Disaster, and The Sea of Trolls trilogy, among others!

If you liked The House of the Scorpion by Nancy Farmer, you might also enjoy these books: