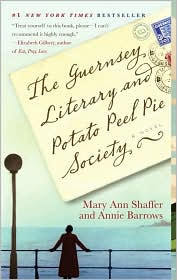 8 of 10: The Guernsey Literary and Potato Peel Pie Society
was just what I like in a book – history, interesting characters, a little mystery, and some romance. For all that, though, it is at its heart, a quiet book.

I won’t lie, people. Catching Fire sort of ruined all other books for me temporarily. What can possibly compare? Fortunately, I read this book prior to Catching Fire, so it wasn’t tainted by the lack of Katniss, Peeta, and Gale.

My mom bought this Guernsey book at the airport on her way to London at the suggestion of the book seller and read the entire thing, then started back at the beginning and read it again immediately. So, you can draw your own conclusions about whether or not she liked it.

The book is written entirely in letters (which initially totally turned me off to even opening the book because I don’t generally enjoy books written in letter or diary form). The first few are between Juliet and her best friend’s brother, Sidney. World War II has just ended and Juliet wrote a humorous column all through the war which has now been published in a book and has been surprisingly successful (Sidney is her publisher). Now, of course, they want her to write another book, but she finds herself completely devoid of inspiration.

While she’s touring for her book, she gets a letter from a man named Dawsey, who had bought a book she once had owned (and then sold to a second hand bookstore). He lives on the Island of Guernsey which was occupied by the Nazis for the entire war and he’d read this book numerous times during the occupation and now wants to know if the author had written anything else and where he could find them.

Juliet strikes up a correspondence with Dawsey and discovers that he’s part of a book club called, you guessed it, “The Guernsey Literary and Potato Peel Pie Society.” She’s intrigued and starts writing back and forth with a number of the members, learning more about life on Guernsey during the occupation and, in particular, about the unofficial leader of the society, the brave and adored Elizabeth.

It took me a bit to get into the Guernsey book and if it hadn’t been for my mom’s introduction to the book helping me remember who Juliet and Sidney were and what the basic jist of the book was, I might have just put it aside. And I am really glad I didn’t – this book is absolutely delightful. I loved all of it.

It’s not a book for everyone, though. My friend, Kelly, a fellow librarian and someone who likes many of the same books as I do, deeply disliked it. I never did manage to get many of the secondary characters straight and I just didn’t bother making the effort.

On the other hand, this book has been at the top of the NYT best-seller list for ages and has earned rave reviews from many many people and publications. I guess it’s like “Eat, Pray, Love.” Some people adore it, other people (um, like me) can’t stand it.

This one, I happened to adore.

If you liked this review of the guernsey literary and potato peel pie society, you might also like these books: