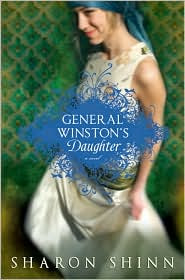 8 of 10: General Winston’s Daughter is the story of Averie’s experiences in a (made-up) foreign country that her country has taken over and is currently attempting to colonize. Her time there changes the way she sees her own life and the people around her.

I checked General Winston’s Daughter out from the library in Boston and read all of about ten pages before there was simply too much moving/baby stuff to do and I returned it.

Happily, once I was settled back in Texas, I discovered that my local library had the book sitting on the shelf, and I finished it in a single day (thanks in large part to the time I spent at the DMV registering the car and the social security office).

Averie is the main character, the “General Winston’s Daughter” referenced by the title. Her father is overseeing the occupation of Chiarrin, a country that is perfectly situated for trade routes and full of natural resources. Things are relatively calm in Chiarrin, although her father is kept fairly busy by a small band of rebels who don’t want to accept the colonization of their country.

Averie has come to Chiarrin with her chaperone to spend six months with her father and also to have some time to see her fiance, Morgan Stode, who is one of her father’s officers. Needless to say, he’s handsome and charming and has a good-looking military career in front of him.

While some of the wives and families who are in Chiarrin with their husbands and fathers find it hot and strange and frightening, Averie quickly falls in love with this new place. She’s always been a bit of a free spirit, doing whatever she wants and flouting the rules of decorum and this location gives her even more opportunities to do so.

As you may have guessed, Averie’s life has been pretty sheltered; she has plenty of money and status and her exposure to diversity of any sort appears to have been basically zero. Now she’s exposed to a completely new culture and as she makes a few new friends (one is a soldier in her country’s army who is from another conquered society and one is a native woman), she starts to question the actions of her country and the motives of those who carry out those actions, including her father and fiance.

The blurb on the inside flap of General Winston’s Daughter gave away quite a lot, but the descriptions were so simplistic that I was surprised when the plot developed in a much more natural and realistic way. I didn’t feel like people changed instantly or acted completely out of character. Instead the characters grew in ways that made complete sense in context. That’s something I love in a book.

And speaking of characters, it really is Averie that made this book for me. Sometimes I got a little bogged down by the details of the civilizations, but Averie was so real to me and so thoroughly likable that I could forgive the things I didn’t like so much. She’s a little flighty, yes, a little quick to do exactly what she wants with no thought for the consequences, but she’s so good, so kind too.

I love the title of this book – it so accurately sums up the change in Averie. She goes from being someone’s daughter to becoming her own person, with views she’s developed on her own.

It’s not a stand-out title in my mind, not one I would rush to recommend to everyone I know, but it’s a solidly good read and I certainly enjoyed it.

Previous Post: « I Wasn’t Born in Texas, But I Got Here As Fast As I Could
Next Post: One Month »