I mentioned at the beginning of the year that my goal was to read 150 books this year. I’m just slightly behind schedule, with 34 books read this quarter.

I haven’t been doing quite as much reading as I’d like, but I’m feeling motivated to work harder to make it more a part of my life (after attending a panel at Duke yesterday about creativity, I’m somewhat on fire over here).

I’m also changing up my quarterly lists just slightly by highlighting my three favorite books from the quarter before I dive into the full list.

For January, February, and March, my favorite books were: 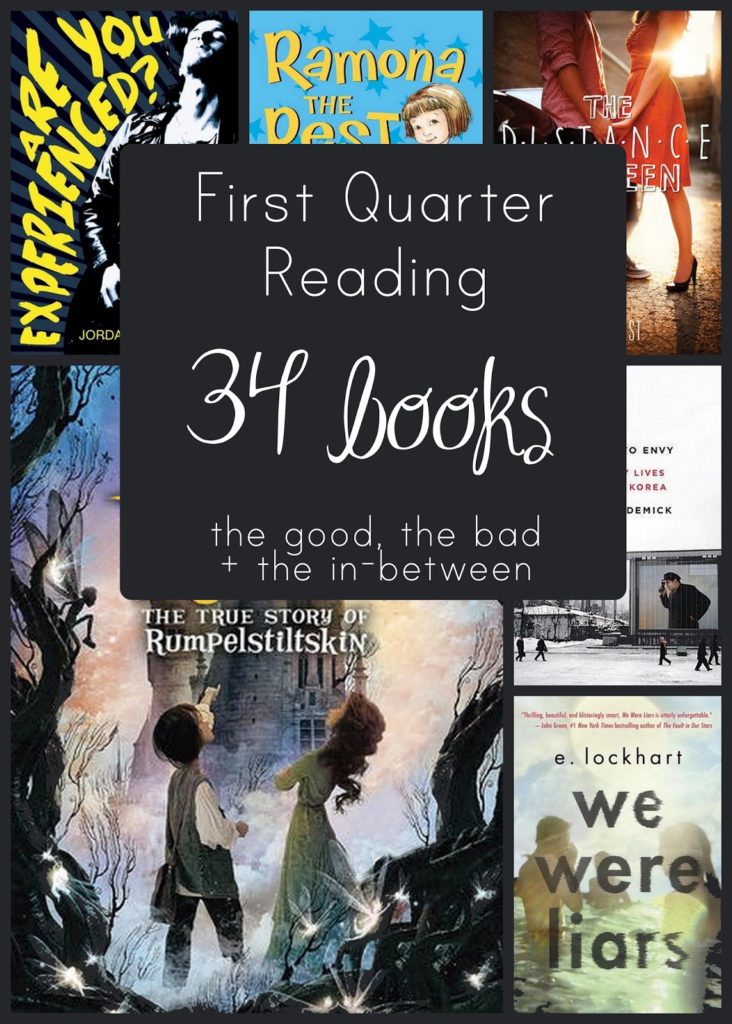 I listened to this just a couple of weeks before it won the Newbery. Because it was an audio version, I didn’t get all the illustrations, which was too bad. I think, though, that I’m just one of the few people who doesn’t LOVE Kate DiCamillo (I like her stuff, but it’s just not my favorite).

I knew basically nothing about Kate, so this was interesting, but I wish I’d picked a different book about her (this one just wasn’t that well-done, I thought. The endnotes mentioned she wrote it in six weeks or something really short like that. And. . .it read like it).

I had such high hopes for this one, since so many people had raved about it. But it was just very average – I was never gripped.

Pretty good. But let’s be honest – I remember almost nothing about it at this point, three months later.

This was an ARC I got through NetGalley and it turned out to be pretty decent.

I was obviously really doing an Ender series streak here.

I started reading this on the plane when I went to Vegas (while my children were miraculously napping/coloring in silence), and it was pretty decent YA. I liked that it spanned four years of high school.

This was just so crazy to listen to – it is unbelievable what she went through and how well she seems to have dealt with it (I will say, though, that the writing wasn’t great).

The sequel to Waiting on the Sidelines. Surprisingly good – sequels are usually so lame.

That Sara Zarr – she is just such a fantastic character writer. I’ll read basically anything she writes.

Rereading this made me appreciate all over again how GOOD Rainbow Rowell is. Dying to get my hands on her upcoming book.

This was our first couples bookclub book and it was fascinating. It’s just hard to wrap your mind around how BAD things have been in North Korea in such recent history.

This book was a turning point in reading aloud to Ella. She totally GOT this book and begged to read more all the time.

Cute and fun YA romance. A Valentine’s weekend win.

I have been waiting for the audio of this book for AGES since I loved The Raven Boys so much, but I kind of slogged my way through this.

Watch The Parent Trap instead. Better story about switching places with someone.

I’d rather have read the full adult version – this was too short.

Ironically, when I added this to the list, I thought “I can’t remember what this book was about at ALL!”

Another Newbery book this year. Short and. . . cute, I guess. (“Meh” is really the word I’m looking for)

I have absolutely no idea why I read her books.

I’m not sure Ella was QUITE old enough for this one. “B” is for Betsy was way better for her level.

It took me a long time to get into this one, but it ended up being fairly good.

FINALLY a book I can rave about on this list. Dear heavens, I love Jordan Sonnenblick so much. He’s clever and funny and this book delighted me from the first to the last page. And made me want to know everything there is to know about Woodstock.

I reread this on our cruise and fell in love with it all over again. That woman can WRITE.

I liked this more the second time (I didn’t notice the abundant swearing so much). It’s just so heart-breaking, though.

Perfect YA beach reading (although, it’s not like I need a beach to justify reading YA).

I like his books (he wrote Babe) and Ella really enjoyed this one too.

I’ve meant to read this for years, and then it was available on audio when I was out of things to listen to, and it was STUPENDOUS. I might re-listen to it again very soon. So inspiring.

This was just a leeeetle too much for me. I just don’t love fairy tales (unless they are retellings of ones I already know).

My mom and sisters and I are doing a bookclub this year, and this was our first read. I had low expectations, so I was surprised by how much I liked it.

Ella liked it just as much as “B” is for Betsy. I love these sweet books.

This was pretty solid YA romance. A nice book to read between trips.

THIS was a great book. I downloaded the audio and just delighted over every word. The story was tight, the narration was fantastic, and the whole plot was very clever. Highly recommend.

This was a little more advanced than the “B” is for Betsy books, but Ella hung with it surprisingly well.