Are you familiar with Restaurant.com?

The basic idea is that you can buy a gift certificate to a restaurant at a deeply discounted price. The restaurant gets a customer they might not have otherwise, and you get a cheaper meal. There is usually some sort of clause on it (can’t be used on Valentine’s Day, you must spend at least $35, minimum of two entrees, etc).

Bart and I are big fans.

We bought a few for when we went to San Francisco, we used it several times in Texas, and now we’re thrilled to be in Boston where they have about 100 participating restaurants.

The restaurant was Kashmir, a reasonably upscale Indian restaurant and we sat outside, where the weather was perfect. Because this restaurant had a dollar amount we had to spend, rather than a minimum number of entrees, we only ordered one entree and then a bunch of appetizers and side dishes to take us up to $35.

It was a delicious dinner and we only ate about half of it, so they packed the rest of it up and we had it for lunch the next day. Afterwards, we walked down through the Apple Store, Anthropologie, and past the Boston Public Library before catching the T back home. A perfect night in Boston.

Plus, our entire dinner, including the cost of the gift certificate, taxes, and a generous tip (on the pre-discounted bill) was only $26. Hard to beat. 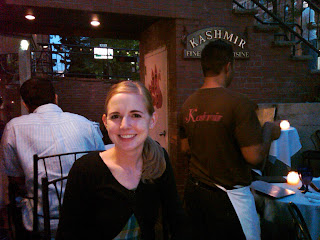