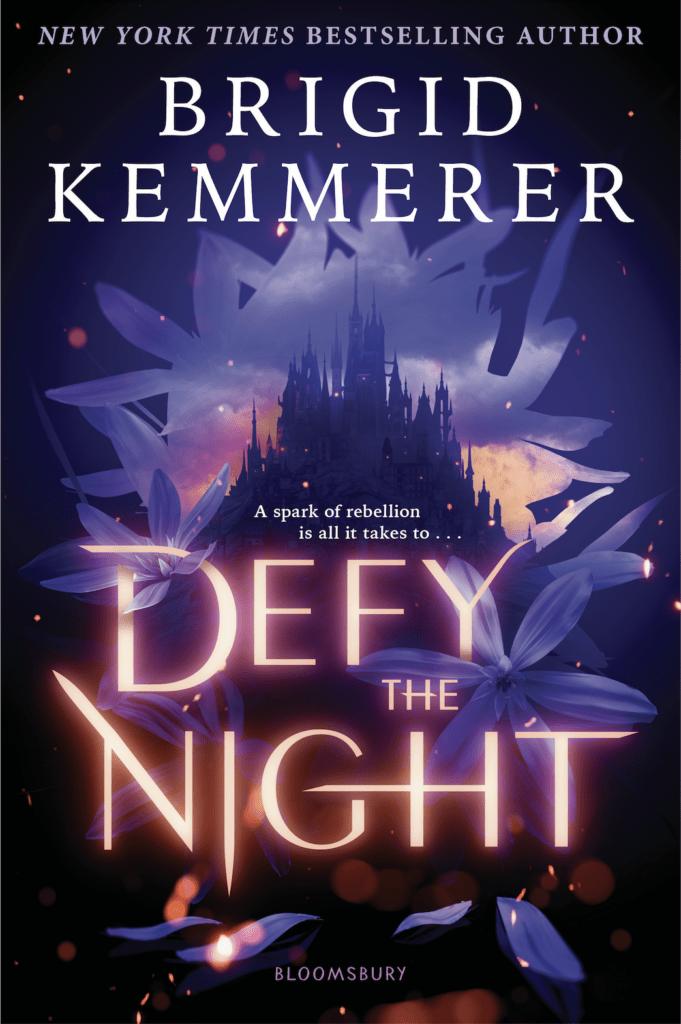 One of my favorite books I read in 2020 was A Curse So Dark and Lonely by Brigid Kemmerer (if you haven’t read it, it’s a TERRIFIC retelling of Beauty and the Beast – I loved it so much).

So when a copy of her newest book, Defy the Night, showed up in my mailbox, I didn’t hesitate for a second.

And happily, it was even BETTER than I expected.

The publishers are calling it a fantasy series but there’s actually no magic in it at all – it probably just FEELS like a fantasy book because of the setting and storyline. (And yes, there are maps in the front).

It’s one of those books with lots of plot twists, so I don’t want to give too much away, but here’s what you should know about Defy the Night.

Defy the Night by Brigid Kemmerer

Kandala is a kingdom barely holding on.

A mysterious sickness has begun spreading among the people and the only cure, an elixir made from Moonflower petals, is in short supply, thanks to the fact that only two of the kingdom’s sectors can grow Moonflower and those sectors want to make as much money as possible on their suddenly wildly valuable commodity.

A black market has sprung up around the petals, which means theft, shipment raids, and lots of desperate people, and the palace is doing everything possible to keep the peace.

The former king and queen were gentle and beloved, but when they were brutally assassinated in a plot masterminded by the consul of one of the sectors, young Prince Harristan suddenly became king.

And after seeing how his parents’ kindness left them exposed to murder, he was determined not to make the same mistake.

He immediately appointed his younger brother, Prince Corrick as the King’s Justice –  the one responsible for stamping out any sign of rebellion and making a brutal example of anyone who breaks the law (and more and more people are being made examples of as the sickness and desperation for the Moonflower petals grows).

As you might imagine, these brothers are. . . not beloved, to say the least.

In the Wilds, Tessa is an apprentice to an apothecary – she learned her skills from her parents who did their best to distribute medicines and cures to their neighbors as the sickness spread. For their efforts, they were killed by the royal Night Guard, right in front of Tessa’s eyes.

Now, Tessa does the same as her parents – stealing Moonflower petals from the Royal Sector and distributing it to the people too poor to afford it themselves. Her partner in crime is Wes and together they risk their lives on a nightly basis.

And possibly developing a little romance in the meantime (I know you’re shocked).

I was SO into this book.

It was funny and clever (I live for some snappy dialogue) and there were so many twists I did not see coming.

The biggest downside to Defy the Night is that it’s the beginning of a series which means we’re all going to have to wait for the next book (and by the time it comes out, I’ll probably have forgotten all the important details of this first one).

The good news is that it doesn’t end on a cliffhanger. There is certainly opening for the next book, but it’s not an ending that makes you want to throw the book at the wall when you finish.

If you’re looking for a fun, engaging read, this is a total winner.

If you liked this review of Defy the Night, you might enjoy these books too: