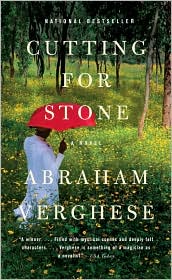 6 of 10: After a really slow start, I found myself enjoying Cutting for Stone, but I don’t have the intense love for it that so many people do.

I’m glad to have read this book. It is widely popular right now and I don’t like having not read something that so many people have read (how do people stand not having read Harry Potter? Muggles!).

This is a book, I think, that I would have greatly benefited from an introductory summary. I read it with no idea where it was going or who the story was even about. Sometimes I like that, but for Cutting for Stone, which has quite a lot of things going on, I could have used a little hand holding.

cutting for stone by abraham verghese

The story of Cutting for Stone is told from Marion’s point of view – he and his twin brother, Shiva, were born in an Ethiopian hospital to a nun (one hardly needs to point out that this is problematic, to say the least). The father appears to be the primary surgeon at the hospital, Dr. Stone, but he seems, like everyone else at the hospital, to have had absolutely no idea that she was pregnant. She dies in childbirth and Dr. Stone
flees. The twins are raised by Hema and Ghosh, two other doctors at Missing hospital.

And then something (oh, lets be honest here, it’s a girl) creates a mega-rift between the brothers and Marion leaves to become a doctor in America. Where, of course, it turns out that Dr. Stone is and Marion ends up having to confront the very things he was trying to escape.

I have to say, I’m a complete wimp about reading medical things. I cannot even read a sentence that contains mention of a scalpel without wanting to throw up. (I know, how I managed to birth a baby is completely beyond me too). So that does make this book a little difficult for me.


I liked Cutting for Stone; I did. Once I was finally about halfway through, it really picked up for me and I finished it in about a week. It was just the first half that nearly did me in. And the ending nearly brought me to tears (and not just because I was finally done with it after plugging along for three months).

Now that it’s been a month or so since I finished it, I find myself almost wanting to go back and reread it now that I know where it’s going. But, you know, only almost.