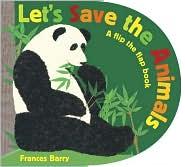 Let’s Save the Animals quickly became one of Ella’s favorite books. Each page shows an animal and has a flap that flips over to show the animal doing another activity. The illustrations are fun (a collage-style) and the animals were doing all sorts of interesting things, like elephants giving themselves showers, penguins sliding on the ice, and tigers pouncing.

Most pages only have one sentence (describing the two activities the animals are doing) and then one sentence in very small text that talks about why the animal is endangered (I have not read these sentences to Ella because they are very tiny and usually vertical).  I like that it makes it possible to read it to a very very young child or to gear it toward an older one.

This is not a book that I ever let her look at by herself because the flaps were just begging to be ripped out, and the end of the book has a page with cutouts of each of the animals that appeared earlier and those were really asking to be torn to shreds by tiny fingers.

It’s got a little bit of an environmental bend, talking about extinction and then, on the back inside cover, listing ways you can help the environment and animals.

This one is a winner. 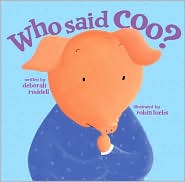 Who Said Coo? is cute and sweet, but not particularly memorable. Lula (a pig!) snuggles into bed, when she hears various noises outside her window. She keeps going out to shoo away the intruders, but when she discovers who it is and that her shooing has hurt their feelings, she apologizes and invites them all in for a sleepover.

It’s not a difficult book or text-heavy, and young children will enjoy the various animal sounds the intruders make.

The images are cute, the rhymes were more clever than I might have expected, and it’s a nice pick from the library, but not something I’m desperate to own.