I think each year the 2 x 2 list gets better. So far, we’ve thoroughly enjoyed every book from the list (although we still have many unread ones!). These two were winners for both Ella and me.

In fact, by the time we returned Cindy Moo to the library, Ella could recite nearly the entire book. I wish I’d caught that on video. . . . 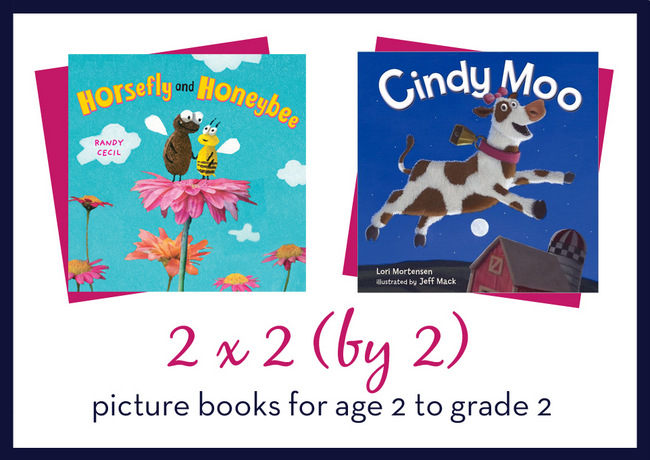 Horsefly and Honeybee by Randy Cecil.
This is one of those little picture books that you don’t want to think too hard about because it’s a little disturbing.

Both Horsefly and Honeybee want to take a nap in the same flower, and they get into a fight where both of them end up missing a wing (that’s a more polite way to say they rip each other’s wings off, yes?). Honeybee starts for home on foot, which takes forever, and then a frog snatches her up. He’s thrilled to have found some food that won’t fly off, so he sticks her on a lilypad while he goes off in search of more food.

It turns out Horsefly is also sitting on that lilypad, having already been caught by the frog, but fortunately, a little teamwork helps them make their escape before they end up as lunch.

It’s just a short, amusing little story. Try not to think about the violent aspects of it (much like we pretend basically every fairy tale is horrifyingly scary or evil).

Cindy Moo by Lori Mortensen, illustrated by Jeff Mack. The book opens with Cindy Moo (a cow, in case you couldn’t guess), listening outside the window of the farmhouse while inside one of the occupants sings “Hey Diddle Diddle.”

Cindy Moo instantly becomes obsessed with the idea of jumping over the moon like the cow in the rhyme. Her fellow cows are dubious that this is possible, but Cindy Moo won’t be stopped. As one try after another ends in failure, though, she starts to give up hope. Happily, on a rainy night, she discovers a way to succeed.

I thought this book was very clever and the rhyming verses were excellently done. Definitely worth a a read.