For the last couple of years, I’ve bought nothing but the giant tubs of yogurt because, hey, it’s not like Ella needs a convenient serving size to take to work. Sometimes I even buy expired yogurt because I like to live on the wild side.

Then, in January, Bart asked if I would start buying some individual packages of yogurt (apparently he does go to work. . .). I bought a few of the store-brand and then (the day after I bought 12 more), he said “I actually don’t really like this yogurt. No need to buy any more of it.”

Ella was initially extremely enthused about these little yogurts because they are WAY sweeter than the plain yogurt she’d been eating for the past two years and also I think she just loved the novelty of a tiny cup of yogurt.

But then about two days after Bart declared he didn’t care for them, she also lost her love for them. She’d eat about two bites and then declare she was done. And I couldn’t even blame her since I found them unappealing too and the ingredient list was way longer than I am comfortable with.

(There are still four or five of these little yogurts hanging out in my fridge. I’m not holding out hope that they’ll ever get eaten).

Then I got a pack of the Yopa! yogurts and Ella ate the whole thing for breakfast (and the only things I couldn’t pronounce on the ingredient list were the names of the live cultures) and asked for a second. And she ate that whole one too.

And she was MEGA excited about the whole thing. When things are especially thrilling to her, she likes to say “Happy Day!” about five hundred times and dance around. (You know you want to watch it):

(If you’re wondering whether or not my life is a bit boring, the fact that I have just written hundreds of words about our yogurt habits should answer that question for you).

Another boring-mom perk to these yogurts are that the top part, which holds the granola or chocolate chips (of course I picked the ones with chocolate chips – I make excellent granola, but I don’t make chocolate chips), can be reused as a lid. Which means if she ever happens NOT to finish the whole thing, I can stick it back in the fridge without trying to finagle it into a plastic bag or use half a piece of tinfoil, etc (my life. It is one of trials and hardship, for certain). Not to mention that opening the chocolate chips is an activity on its own. 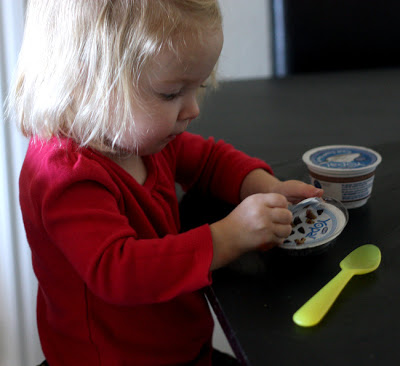 (Also. . . when we were both having one for a snack, Ella asked if she could open the chocolate chip part of mine. Because she’d been so successful at doing her own, I let her do mine. Of course, she flung them all over the floor by accident. We picked them up, I stirred them into my yogurt like the non-germaphobe I am and we went on our merry yogurt-eating way.

The next morning, Bart came home from his run and was sitting on the floor next to the kitchen table stretching. After he went in to our room to take a shower, Ella noticed he’d made a little pile of chocolate chips we’d missed and she asked if she could eat them. I said she could (have I mentioned that I’m not a germaphobe at all?). A couple of minutes later, I heard her making these incredibly loud crunching sounds and asked what she was eating. She said, “Those gray chocolate chips!” When I had her spit them into my hand, I discovered that, along with the chocolate chips, Bart had also put a couple of small rocks from his shoes into the pile (intending, I assume, to throw them all away at once). And now, my child was trying to chew those rocks. Excellent parenting on all fronts over here).

My one complaint about these yogurts is that they seem to only come in non-fat versions. I wish there was a full-fat version because I’m not really into low-fat or non-fat dairy products. Although, happily, this is one that doesn’t make up for the lack of fat by adding a bunch of artificial thickeners.

Overall, a happy balance between my desire for non-waste and real ingredients, Ella’s desire for delicious yogurt, and Bart’s desire to have a portable yogurt (not that Ella is likely to let him walk out the door with one of these. I’m pretty sure the minute she spotted chocolate chips she claimed them all for herself).

Speaking of balance, gold medalist Gabby Douglas is an expert, and she’s challenging you to take the Yopa! Taste Challenge where you can win a variety of prizes, including $10,000! Just “like” Yopa! on Facebook for a chance to win and to grab a coupon for $.50 (or more!) off one cup of Yopa! Authentic Greek Yogurt.

I was selected for participation in this campaign as a member
of Clever Girls Collective.