I know what you’re thinking.

“Is Janssen going to write about anything besides traveling for the next four months? Snore. . . .”

Eventually, when we’re settled in London, I’m guessing the logistics of traveling won’t be on my mind on such a minute-to-minute basis, but considering I’m writing this from my fifth country in nine days, it’s kind of top of mind at the moment.

Here’s what’s been a lifesaver for us thus far. 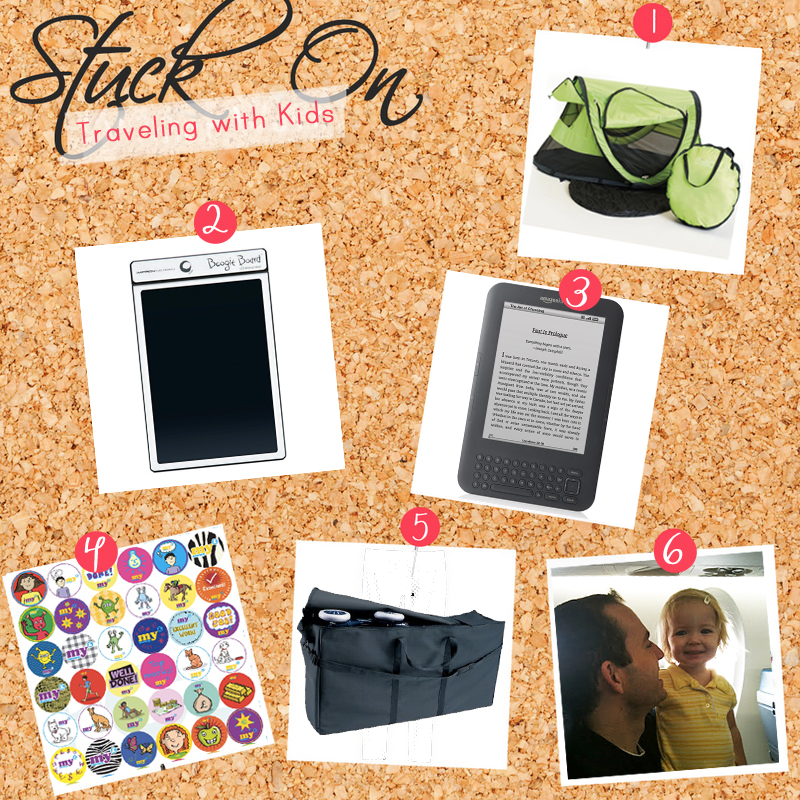 1. KidCo PeaPod Sleep Tent. We tried like crazy to keep the amount of luggage we were taking abroad to a minimum. The pack-n-play was one of the big things we couldn’t figure out. It’s so heavy and bulky, but the idea of Ani sleeping not in a crib? I think none of us would be getting much sleep. Preethi had mentioned in the past that they used a baby tent instead of a portable crib, and suddenly the idea of something that folded down flat in your carry-on luggage and weighed only a pound or two was seriously appealing. KidCo sent us the PeaPod Plus, and it’s been a lifesaver. We started Ani sleeping in it about a week before we left so she could get used to it. She woke up a bit early (maybe 30 minutes) the first couple of days, but then settled right into it. When it’s time for bed, she happily hops in and lays right down, and I love that Ella can go in and get her out in the mornings or after naps. Seriously, I love this thing. The PeaPod regular is smaller (Ani can just barely sit up in it), so you can stuff it in a carry-on bag and it fits better in small hotel rooms, whereas in the PeaPod Plus both of my girls can fit in and sit up easily, and it fits a kid up to about 5 (or, in the case of my miniature children, probably until they are 15).

2. Boogie Boards. A friend introduced us to these in North Carolina, and then Bart’s nieces and nephews had them this summer and I think they are brilliant. Perfect for playing endless games of tic-tac-toe, drawing pictures, playing hangman, and generally saving the environment.

3. Kindle. If we didn’t have room for a portable crib, you can bet we really didn’t have room for me to drag along a bunch of books. Kindle to the rescue. Also, Overdrive and free digital library books to the rescue. I have a baseline model I won at Bart’s work party about three years ago, and it is definitely saving my life. If you travel and you like to read, an e-reader is so the way to go. Okay, okay, maybe one paperback to read during take-off and landing (and then leave in the seat back pocket). If only I’d bought a reading light for it.

4. Stickers. This is my secret weapon on a plane flight. My girls are obsessed with stickers and a piece of paper and some stickers can keep them occupied for ages (also, they can do it at any point in the flight, when you have to shut off anything electronic). I almost always buy mine at Michael’s where you can get a book of 400 stickers for $1 (or 60 cents, if you have one of those ubiquitous 40% off coupons).

5. Stroller Bag. Early on in my parenting career, our stroller basket got bent on an airplane flight and never closed correctly again (not irritating at all). Since we have a nice stroller now that I intend to use daily, I have no interest in letting it get tossed around by an airline. I bought this stroller bag so it won’t get ripped, dirty, or bent/broken. Because if I’m still bothered that my $20 stroller was damaged three years later, you can imagine how unhappy I’d be if my beloved Britax got damaged. It’s not the perfect bag (we have to take the wheel off of the stroller to get it to zip shut), but it did the job and our stroller arrived in Frankfurt undamaged.

6. International Flight Taxes. I learned this tip from Oh Happy Day. On international flights, you have to pay the taxes on a lap child’s “free” seat. Call in and do it ahead of time, so it doesn’t cost a fortune the day of (I assume they are based on the current price of a regular ticket, which would be extremely expensive two hours before the flight leaves). Ani’s taxes were about $120, which was a pittance compared to what the regular flights were. (Some airlines charge it automatically when you book – they just have you add the lap child as a regular ticket and charge you the taxes).