A long time ago, in a house only a few blocks away from my current apartment, I wrote a book review and someone asked if I’d been paid to write it (it was a book quite outside the normal teen romance scope of my reading). I had not, but the book was non-fiction and so my review was more outline-y than my standard “and there was a love triangle of doom” reviews.

I’ve been thinking about that post mainly because here is another post that will sound paid but is most definitely not (which is tragic, but true; however, if one of you would like to send me a check for writing this post, I will not turn it down).

Back in September, it was Austin Restaurant Week (if you aren’t familiar with the Restaurant Week concept, the idea is that restaurants offer a several course menu for a fixed cost so that you can try out restaurants you might not otherwise afford or be inclined to try – many cities around the USA have them annually).

Anyway, I had spent a ridiculous amount of time trolling the list of participating restaurants, looking at menus and deciding which one we might want to try out.

And then, on Austin Restaurant Week’s twitter page, I won a $25 gift certificate to Fabi and Rosi, a restaurant that I hadn’t even really considered. (My mom would say “of COURSE you won,” but, really, she has no idea how many time I entered the daily giveaways both on Facebook and Twitter, for both Bart and me, so statistically, the odds were in my favor of winning at least ONCE (which of course, was the maximum times you were allowed to win)).

People, I cannot say enough good things about this restaurant.

It’s downtown, but not RIGHT downtown, so there was easy parking. Bart and I remembered why we don’t miss Boston, home of the “Please hand over your first born child or prepare to max out your credit card” parking.

The restaurant is in this darling old house (apparently another famous Austin restaurant used to be there until they moved to a new location). If Anthropologie had a restaurant, it would look like this one. It was that cool. 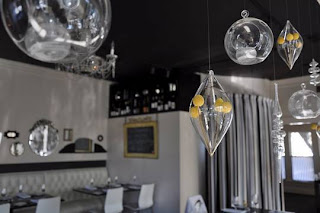 We’d planned on taking the little girl with us, but then Ralphie, proving herself once again to be her own Texas Welcoming Committee, offered to watch her and, not being idiots, we took her up on it. On my reservation, I’d told them we’d have an infant and when we showed up, they took us to our table and they had one of those fancy little carseat holders set up for us. The hostess said, “Oh, you didn’t bring your baby! We were all so excited to see a little newborn.” Of course I loved her instantly for saying so.

Because of a mix-up with the gift certificate, the chef came out to talk to us, and oh, how we liked him instantly. He was also, we found out later, the owner, along with his wife.

We decided to skip the Restaurant Week menu in favor of choosing our own items from the menu (the power! the control!) and we started off with some bratwurst (the chef is German), which was fantastic. And they sent us out some little goat cheese tarts (mmm, goat cheese) and also a bowl of mussels. Tragically, I learned that I don’t much care for mussels. I ate one. I drank a lot of water after that. At least they were free. . .

For our main course we got the schnitzel with noodle (of course I had the Sound of Music song stuck in my head for the rest of the evening) and then, because we were feeling brave, the vegetable plate. Oh. My. Heavens. That vegetable plate was, quite possibly, one of the best restaurant meals of my life. Every vegetable was so fantastic, I could hardly believe it. I didn’t know a carrot could taste so good.

One of the waitresses noticed I was checking out every plate that came by, just to see what else people were ordering and so she started pausing briefly at our table to show me the various dishes as she passed.

It was one of the best dates I can remember in ages. When we left, the weather was a little bit warm and breezy and the lights in the front of the restaurant were twinkling over the outdoor seating. It was a perfect Austin evening.

I looked at the menu again this week and it’s almost all new dishes. I can’t wait to go back and try some more. Someone come visit soon, please, so I can have an excuse to go back.